Hopes of the United States, Europe and Russia to try to ramp up Syria diplomacy in the wake of the Iran nuclear deal have stalled amid Saudi reluctance, and there has been no breakthrough after the flurry of recent diplomatic contacts between Washington, Moscow and Riyadh. 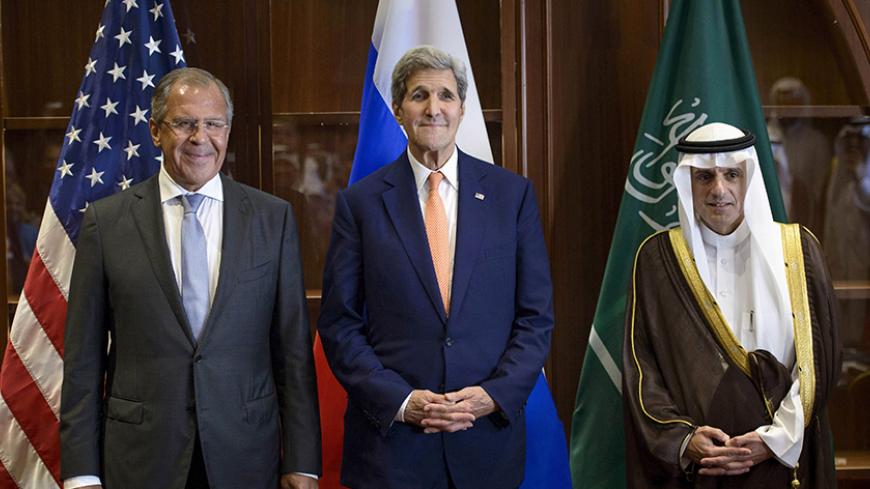 With the plight of thousands of Syrian refugees trying to reach Europe bringing renewed Western attention to the 4-year-old Syrian conflict, prospects for intensified diplomatic efforts to try to resolve the war remain deadlocked after a flurry of recent consultations between Moscow, Washington and Riyadh, diplomats and analysts tell Al-Monitor.

“Nothing is moving; everything is stuck,” UN Syria envoy Steffan de Mistura told an NGO analyst working on regional security issues at a meeting last week, the analyst, speaking not for attribution, told Al-Monitor Sept. 7.

Though the United States, Russia and European Union had hoped to try to build on the momentum of reaching the Iran nuclear deal in July to pursue multiparty diplomacy on a Syria political transition and countering the Islamic State, efforts to persuade the Saudis to let Iran be part of some sort of Syria international contact group have been rebuffed to date by Riyadh.

A flurry of diplomacy in the wake of the reaching of the Iran nuclear deal July 14, including a rare three-way meeting between US Secretary of State John Kerry, Russian Foreign Minister Sergey Lavrov and Saudi Foreign Minister Adel al-Jubeir in Doha on Aug. 3, has not led to a breakthrough on how to move the process forward. A key hitch, multiple sources briefed on the discussions say, is that the Saudis have told the Russians and the Americans that they would only accept involving Iran in the contact group discussions on Syria if Iran agrees in advance that Syria’s President Bashar al-Assad has to go. Iran has rejected such preconditions.

“Peace will not return to Syria with the slogans we are hearing from Syria's neighboring countries," Iran’s Foreign Minister Mohammad Javad Zarif said at a press conference with visiting Spanish Foreign Minister Jose Manuel Garcia-Margallo on Sept. 7. Whether Assad stays or goes is a “decision for the Syrian people to make,” he said.

With little sign as yet of traction from recent meetings to explore reviving a diplomatic Syrian track, there were new signs that Russia and Iran were doubling down in their support of Assad in the interim, with reports of new Russian military shipments and advisers arriving in Syria in recent days.

While “it is premature” to talk about a possible direct Russian military intervention in Syria, Russia is “already providing Syria with quite strong support in terms of equipment, training of military servicemen and weapons,” Russian President Vladimir Putin told journalists in Vladivostok on Sept. 4. “We are considering various options.”

A Russian military buildup in Syria “could further escalate the conflict, lead to greater loss of innocent life, increase refugee flows and risk confrontation with” the US-led coalition operating against IS, Kerry warned Russia’s Lavrov in a phone call Sept. 5, the State Department said in a statement.

New US Syria envoy Michael Ratney met with Russian Deputy Foreign Minister Mikhail Bogdanov and other senior Russian officials in Moscow on Aug. 28, with UN envoy de Mistura on Aug. 29 and with Saudi Arabia’s al-Jubeir in Jeddah on Aug. 31 “to continue discussions about working toward a genuine political transition and bringing an end to the devastating crisis in Syria,” a State Department official told Al-Monitor. “These meetings support Secretary Kerry’s engagement with his counterparts, as well as our regular engagement on and support for Special Envoy de Mistura’s efforts.

“However, we don’t have anything further to share or announce at this time,” the State Department official added.

Though Iran announced in August there would be a GCC-Iran meeting, possibly in Bahrain or Qatar, by mid-September, a meeting date or venue had yet to be finalized two weeks later, a diplomat from the region, speaking not for attribution, told Al-Monitor on Sept. 1, attributing the delay to divisions within the GCC side.

“If there is genuine diplomatic movement toward political transition or even significant de-escalation in Syria, I am not seeing it,” Fred Hof, a former Obama administration Syria adviser, told Al-Monitor on Sept. 7.

“Iran has concluded — correctly, in my view — that to lose Bashar al-Assad is to lose its privileged position in Syria, which gives it an all-important land bridge to Hezbollah in Lebanon,” Hof said. “Moscow is seeing its Syrian client being swallowed by Iran, and is doubling down on the regime in an effort to persuade Bashar that he needs Russia too.

“So the prevailing dynamic seems to be one in which Tehran and Moscow compete for influence in Syria by trying to outdo one another in supporting Bashar,” Hof said. “It's not clear to me that Washington brings anything to the party beyond a sincere desire that Tehran and Moscow escort their boy to the exit. That's not likely to happen.”

The Russians “are looking for a solution that would be different from 100% fulfillment of the Western (and Turkish and Saudi) demand that Assad must go now,” a former Russian diplomat, speaking not for attribution, told Al-Monitor. “Plus, they want a role in the formation of the new [Syrian] government … so that the new government is neither radically Islamic, nor 100% Western-oriented, nor is ready to help radically deprive Iran of its strategic options.

“I think Moscow can be open to a gradual and legitimate evolution of power structures in Syria, if the other sides (US, Saudi Arabia, etc.) start showing their readiness to look for more elegant solutions, than just making Assad flee once Washington decides so,” the former Russian diplomat said.

With the Saudis preoccupied with their role leading a coalition conducting a military intervention in Yemen, Turkey and Iran are currently the two key regional players most actively engaged on Syria, former Syrian diplomat Bassam Barabandi told Al-Monitor on Sept. 7. In recent weeks, Iran has been directly negotiating with the Syrian opposition group Ahrar al-Sham over the fate of the Syrian town of Zabadani and two nearby Shiite towns, at negotiations hosted by Turkey, with no Syrian officials present, he notes. Iran’s new diplomatic push in Syria “shows that Iran is more directly controlling its Syrian interests,” bypassing the Syrian regime, Barabandi, co-founder of the nongovernmental organization People Demand Change, said in an Aug. 24 analysis co-written with the Atlantic Council’s Faysal Itani.

The Turkey-Iran axis may prove more useful for Syria conflict mediation than the Saudi-Iran one, with the Saudis distracted by Yemen and viewing Syria mostly as a zero-sum contest with Iran, an analyst involved in track-two discussions in the region, speaking not for attribution, said.

Even in the absence of new diplomatic initiatives to resolve the conflict, the White House said Sept. 7 it is ramping up consideration of options to respond to the staggering Syrian refugee crisis.

“The administration is actively considering a range of approaches to be more responsive to the global refugee crisis, including with regard to refugee resettlement,” said Peter Boogaard, National Security Council spokesman, in a Sept. 7 statement to Al-Monitor.

“We are also in regular contact with countries in the Middle East and Europe who have been greatly impacted by the increased refugee flows,” Boogaard said. “It is important to note that the United States has provided over $4 billion in humanitarian assistance since the Syrian crisis began, and over $1 billion in assistance this year. The US is the single largest donor to the Syrian crisis.”