Major international parties continue to fumble for a solution to the Syria crisis as the plot thickens, and Russian airstrikes join the fray. 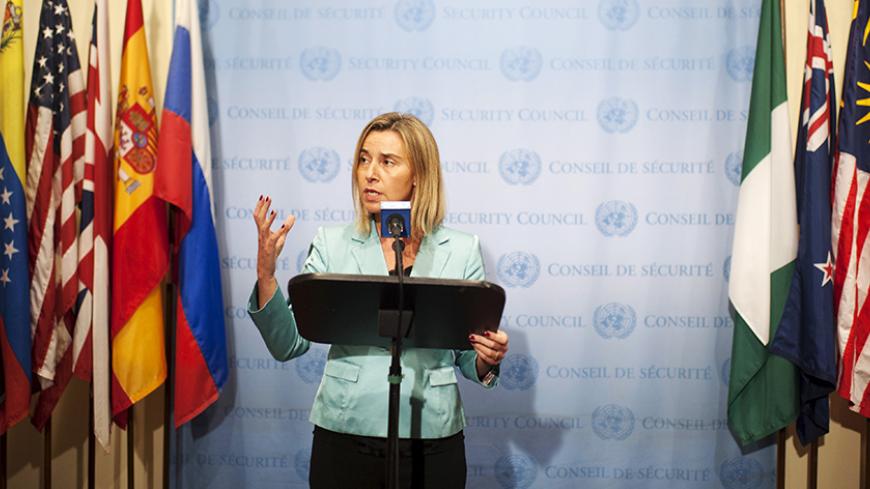 NEW YORK — Even as Russia’s entry this week into an air campaign in Syria cast a shadow over diplomatic proceedings at the 70th anniversary of the United Nations General Assembly, some global players — boosted by the rare diplomatic success of the Iran nuclear deal reached in July — are looking to the international group that negotiated it as a possible format to ramp up diplomacy to try to find a way out of the Syrian civil war.

The possibility of using the P5+1 format or a variation to tackle the Syrian crisis and other regional issues was discussed at a meeting of the P5+1 — the permanent five members of the UN Security Council plus Germany — and Iran foreign ministers in New York on Sept. 29, European Union foreign policy chief Federica Mogherini told journalists.

“We have had some discussion on Syria … especially on the fact that we managed to achieve something … so important for the world through dialogue and diplomacy in this format,” Mogherini told journalists at the UN in New York following the P5+1 Iran ministerial meeting.

“This could be also a useful format for other things,” Mogherini said. “And obviously we will explore [this more] in the next days.”

“The answer to the Syrian civil war cannot be found in a military alliance with [Syrian President Bashar al-] Assad,” Secretary of State John Kerry told a UN meeting on peace and security Sept. 30. “But I am convinced that it can be found. It can be found through a broadly supported diplomatic initiative aimed at a negotiated political transition — a transition that has been accepted by the Security Council.”

“I call on all concerned governments — including Russia, including Syria — to support a UN initiative to broker a political transition,” Kerry said. “Further delay is unconscionable. The opportunity is before us. “

US officials said they remain focused on working with a group of partner nations that have been supporting the Syrian opposition on finding a way forward, as well as on “de-conflicting” the actions of the US-led coalition fighting the Islamic State (IS) with the new Russian air campaign in Syria. Kerry held another Syria meeting with counterparts from the United Kingdom, France, Germany, Jordan, Qatar, Turkey and Saudi Arabia in New York on Oct. 1, as he did a few days over the preceding weekend.

“Right now, we are focused on working with key allies and partners on how we can de-conflict and find a way forward on a political transition,” a State Department official, speaking not for attribution, told Al-Monitor on Oct. 1.

“We are not pushing” for using the P5+1 to tackle the Syrian crisis, the US official added.

But former US Ambassador to Syria Robert Ford said an international Syria contact group could be valuable to advancing a political process on Syria and agreeing on humanitarian measures.

“I think some people at State think there might be a utility in some kind of [Syria] contact group that would … include Iran, Russia, Turkey, Saudi Arabia, and the United States,” Ford, now a senior fellow at the Middle East Institute, told Al-Monitor in an interview Oct. 1. “My guess is the Europeans would want to be included in such a contact group.”

“I don’t think it quickly solves the problems on Syria, [but there could be] utility in the countries that have interests [in Syria] laying [them] out in a frank way behind closed doors … and to identify some short-term steps that could be taken that everyone agrees upon, [such as] humanitarian access,” Ford said. “Or to lay out a framework for political progress, with the understanding that you can’t impose it, ultimately the Syrians have to implement it.”

“The trick of it might be less in getting American buy-in, but that of the Saudis and the Iranians,” Ford added. “I think you’d have a hard time getting anyone serious from the Syrian opposition to such a meeting. … Part of it depends on what countries like Turkey and Saudi Arabia do in the coming days to reassure the opposition that they are not being abandoned to the Russians and Iranians.”

Ford said he thought it could be potentially useful to have an international Syria contact group process, even before getting the buy-in of the Syrian parties. But he said, he would not be in a huge rush, with Russian confidence in its new air campaign in Syria likely to face the reality of limited results in a few weeks.

“I wouldn’t rush because [it is] not going to produce quick results, especially if the Russians feel like they are having a great victory by their bombing of lesser FSA [Free Syrian Army] units,” Ford said. “It could be they will not be in a mood to make compromises. And I don’t think they will get very far in the discussions, in a closed room with five countries, if countries are not prepared to make compromises.”

European officials say they are not hung up on whether it is the P5+1 (or “E3+3” as the Europeans call it), or some variation of UN-backed international body that works to advance a Syria diplomatic track.

“The important thing is to try to bring together all the international, regional actors that have an influence on the situation in Syria, to discuss,” Mogherini said Sept. 29.

“I guess we will have to do a little more shuttle diplomacy,” Mogherini added, to get consensus on a Syria diplomatic process that “should start on these two tracks: the fight against Daesh [IS], and [bringing] an end to the civil war and work on the transitional political process.”

“The EU is ready to put all its political weight to try and facilitate a solution to the [Syrian] conflict,” an EU official, speaking not for attribution, said Oct. 1.

Russian-US military-to-military conversations on de-conflicting their respective air campaigns in Syria got underway by videoconference on Oct. 1, the White House and Pentagon said.

Amid concerns over Russia’s intentions as it entered in its Syria air campaign this week, the United States, Russia, Europe and some Syrian neighbors may still recognize they have a mutual interest in not having the Syrian state collapse, even if they disagree on who could lead a future united Syria, said Paul Saunders.

“The Russians don’t want the Syrian government to collapse. But Russian officials over the years … have made clear at a lot of different points, that they are not wedded to Assad,” Saunders, a Russian expert at the Center for the National Interest, told Al-Monitor Oct. 1. “They want the Syrian state to survive. At the present moment, they think Assad is the only viable option in terms of holding it together, the threat is that dire, and that if you take Assad out of the equation, it could just collapse.”

US officials have likewise indicated they too do not want the Syrian state to collapse. Kerry has also recently reiterated that Assad’s departure does not have to come early on in any negotiated political transition, but that he could not stay as leader of a united Syria at the end.

“What [US officials] are saying, as I understand it, is, he doesn’t have to leave right away,” but “everybody should understand … from the beginning,” he will eventually have to go, Saunders said.

“What the Russians are saying is, he probably has to go, but that should really be up to the Syrians,” Saunders added. “And those two things are different. And the problem is, if you are Moscow and you are trying to bring the Syrians along … why is he going to agree to a process that guarantees that he is going to leave?”

Former State Department policy planning official Jeremy Shapiro said while the major international parties may like to get to the Syrian negotiating table, they may still be convinced that their negotiating positions are strengthened by developments on the ground over time.

“Let’s at least say that the Russians and Americans both want negotiations: Can they get the rest of the people to sit in the room?” Shapiro, now a fellow at the Brookings Institution, told Al-Monitor Oct. 1. “I wouldn’t be that optimistic about it.”

“I think both the Russians and the Americans have a strategy … to negotiate from a position of strength, by changing the facts on the ground and [trying to force] the other side to negotiate from a position of weakness,” Shapiro said. “That is both the American and Russian strategies. They can’t both work. Together they stalemate each other. We see that this time, … every time, instead of responding to the demonstration of strength by one side, the other side counter-escalates.”