Turkey has tremendous financial and security influence over the Kurdistan Region of Iraq, exposing Erbil to economic and political vulnerabilities. 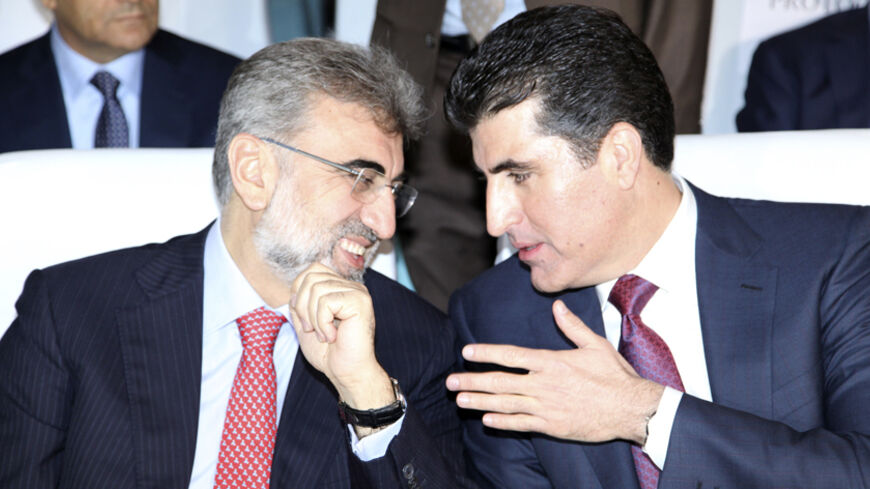 Several months ago, the international media and political pundits were predicting imminent Kurdish statehood. Many in the Kurdistan Regional Government (KRG) believed, and perhaps still do, that the KRG could independently export crude oil to Turkey and create a viable, autonomous revenue source. These expectations were fueled by "energy agreements" between Erbil and Ankara, a cold war between former Turkish Prime Minister Recep Tayyip Erdogan and former Iraqi Prime Minister Nouri al-Maliki and international oil company interests in the Kurdistan region.

Instead of statehood or enhanced autonomy, however, the KRG has become more dependent on Turkey while remaining tied to Iraq. This dependency has deepened with the Islamic State (IS) threatening the region, territorial and resource disputes in Iraq remaining unresolved and Ankara and Baghdad pursuing a rapprochement. It leaves the KRG more deeply lodged between regional powers and enhances Turkey’s control over Erbil’s energy and political agendas.

The Ankara-Erbil alliance initially presupposed "mutual interdependence." Turkey could access KRG hydrocarbons, reduce its dependency on Russian and Iranian gas imports and become a regional energy hub. The KRG also represented a security partner against the Kurdistan Workers Party (PKK) and a Sunni Muslim ally where Turkish "soft power" could be extended. For the KRG, Turkey was a direct energy export route, commercial partner and alternative to Baghdad. To enhance this partnership and leverage Kurdish nationalist interests, KRG officials strategically permitted Turkish companies into the Kurdistan region’s commercial, banking and energy sectors.

Ankara-Erbil commercial ties may have helped develop the Kurdistan region and benefited certain elites, but they have not enhanced the KRG’s economic autonomy. Although Turkey remains the KRG’s largest external trading partner, about 85% of the "trade" between Ankara and Erbil, estimated at $7 billion in 2013, comprises KRG imports of food and luxury items, paid for with revenues from Baghdad. Most imported goods from Turkey are consumed in the Kurdistan region and are not re-exported as value-added products. In addition, exports from Iraqi Kurdistan represent only about 5% of the KRG’s trade activities, most of which involve the re-export of alcohol and tobacco from Turkey to other countries, including Iran.

Indeed, the KRG-Ankara oil export gamble was supposed to change this scenario by giving the Kurdistan region a self-sustaining revenue base. Yet, after six months of "independent" oil exports through the Iraqi-Turkish pipeline, the KRG has further exposed its economic vulnerability and deepened its financial crisis. Despite the 30 million barrels of oil the KRG has reportedly sold through Turkey, the opaque nature of the sales — cargoes roaming the high seas with radars off, boat-to-boat transfers, undisclosed pricing mechanisms and legal disputes — has done little to de-risk large-scale oil exports. The KRG has thus far only received about $2 billion from oil sales, a small fraction of its annual budgetary needs and nowhere near the revenues required to pay civil servant salaries or international oil company costs. Plummeting world oil prices have further disadvantaged contentious and highly discounted Kurdish crude while benefiting energy importers, like Ankara.

In circumventing Baghdad, Ankara and not Erbil has assumed greater control over the KRG energy sector and related revenues. In fact, Turkey has become the KRG’s new financial patron. With unpaid monthly salaries of about $720 million, investment at a standstill, tourism undermined and financial and oil disputes with Baghdad unresolved, the KRG has borrowed billions from Ankara (and private investors) over the past six months. According to local sources, Turkey also recently paid two months of KRG civil servant salaries, manages KRG oil revenues in an account at the Turkish Halkbank and holds Kurdish crude in storage tanks in Ceyhan. Although Baghdad and the KRG have attempted to negotiate another oil export and payment deal, part of the KRG's oil revenues remain with Ankara.

Turkey’s financial influence also strengthens its leverage over Kurdish nationalist politics, at least the part involving President Massoud Barzani. Although Iraqi Kurds have expressed their "disappointment" with Ankara’s lack of military support against the IS onslaught, they are unable to effectively challenge Erdogan without undermining their own financial interests and energy prospects, particularly with the ongoing budget cut-off by Baghdad. In fact, as Erdogan addresses Turkey’s IS and PKK threat and the Kurdish peace process falters, he will likely expect Barzani to help rectify the mistakes he made on Kobani. This effort would also help Barzani counter the PKK’s surge in popularity, especially after the Kurdistan Democratic Party (KDP) peshmerga's withdrawal from Ninevah and the PKK’s rescue of Yazidi groups.

Even then, the extent to which Barzani or the KRG can influence transborder Kurdish nationalist politics will be on Erdogan’s terms. The Iraqi Kurdistan parliament may have voted to support Syrian Kurds with military and humanitarian aid to Kobani (airdropped by the United States), but it needed Ankara’s approval to send peshmerga into Kobani. The limited number of peshmerga that Erdogan eventually permitted to cross Turkish territory consisted of KDP-affiliated troops, but not Democratic Union Party or Patriotic Union of Kurdistan forces.

These trends not only refute the imminent Kurdish statehood discourse, but reveal the changing nature of the Kurdistan region’s autonomy. Any further effort to exchange Baghdad for Ankara not only risks undermining the KRG’s economic viability, but its political maneuverability as well. These vulnerabilities are reinforced as Baghdad and Ankara attempt to reach an entente, IS and militant Sunni Arab nationalists threaten the KRG internal border, Iran remains influential in the Kurdistan region and Turkey seeks to safeguard its territorial integrity. They place Ankara at the center of the Kurdistan hydrocarbons sector, alongside Baghdad, and further challenge the KRG's ability to autonomously shape its energy future.