An Egyptian NGO has launched a campaign that helps children recognize abuse and feel comfortable reporting sexual assaults against them. 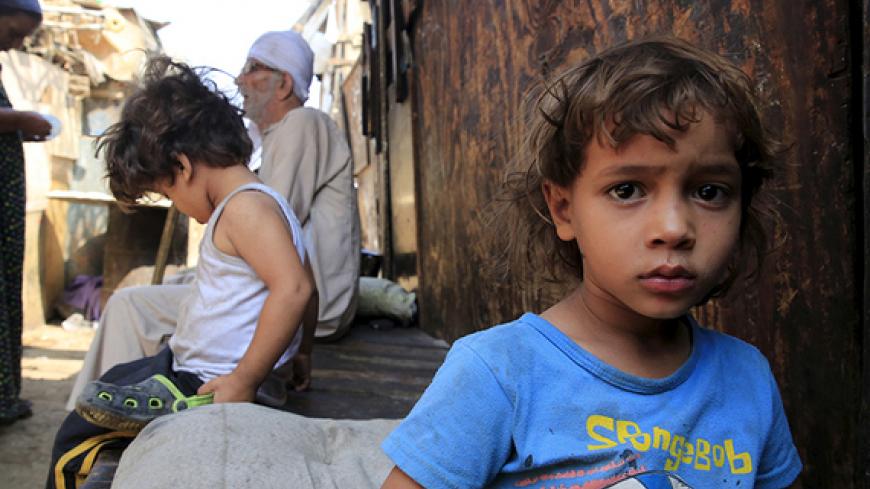 A boy stands in the Eshash El-Sudan slum in the Dokki neighborhood, in Cairo, Sept. 2, 2015. - REUTERS/Amr Abdallah

At a public primary school in the Cairo district of Dokki, a group of kids and adults are learning a new song. Pointing to their bodies, they sing, “Do not let anybody touch here or hold you this way / Because it is your own body and no one has the right to touch it.”

The song is part of a campaign launched by the nongovernmental organization Hemayya (Protection) to raise awareness among children about sexual abuse and to encourage them to report it when it happens to them. The campaign, named after the organization, engages kids through games, songs, and drawing and other illustrative techniques.

“The 75-minute entertainment program that we offer to children seeks to teach them about the boundaries of their bodies, where no one should touch them, and also about how they should react if they are subjected to any form of assault,” Eman Ezzat, Hemayya's founder, told Al-Monitor.

Ezzat said that her campaign, aimed at boys and girls ages 4 to 13, addresses sexual abuse in a language that children can understand. “We want to explain to children in simple terms how to protect their bodies and how to differentiate between benign and malign touching,” she explained.

Also a professor at the Faculty of Specific Education at Cairo University, Ezzat said that edutainment, especially music and drawing, can help children better process and understand what they are being taught. A 2014 study she conducted involving 40,000 boys and girls and their families in 17 of Egypt’s 27 governorates found that children listening to music and engaging with art do better than others in terms of reacting to abuse against them. They rarely respond violently and appear not to suffer as much psychologically.

In Hemayya's program, the children first clean a set of teeth to introduce them to the concept of having to clean and therefore touch their bodies. Then, the instructor tells the children which parts of their bodies should not be touched. The children then listen to music that contains messages about child abuse, sing songs and finally express through drawings what they have learned.

Ezzat and her team of 25 people have visited dozens of places around Egypt to raise awareness about child sexual abuse. “We go to every place children can be found, including sports clubs, schools, kindergartens, community centers, religious institutions and orphanages,” she said.

Ezzat added that approximately 250,000 children in 12 governorates have taken part in the foundation's edutainment activities. Awareness sessions have been offered to the physically challenged and refugees in Egypt. In the coming months, Ezzat hopes to be able to have programs for the visually and hearing impaired.

In addition to group programs for kids, the campaign also offers sessions for parents to teach them how to provide protection and safety for their children. “We tell parents not to be afraid to report a sexual assault against their children due to their fear of social disgrace. We tell them that they have to guard their children’s rights and also encourage their children to tell them about any abuse they faced,” Ezzat said.

She remarked that some parents have already begun to file legal complaints for alleged sexual assault against their children. “The attitude is changing because of awareness campaigns, and because the practice is rife,” Ezzat said.

According to data from the state-run National Council for Childhood and Motherhood (NCCM), a total of 2,284 cases of violence against children were reported during the first half of 2016. That figure includes 120 sexual assaults on the street, in schools or within the victim’s family.

The NCCM numbers revealed a noticeable spike in cases of reported violence against children, leading the NCCM to set up a hotline to take calls from families wishing to report cases of corporeal violence and sexual assault against their children. The hotline also takes calls involving underage marriage.

Randa Fakhr El Deen, the executive director of the NGO's Union Against Harmful Practices on Women and Children, said that many sexual offenses against children go unreported in Egypt. “That is because the victims do not understand what has happened to them and are too little to speak out, or because their families fear scandal,” she told Al-Monitor.

Fakhr El Deen suggested that sex education be added to school curricula to help children understand sexual abuse and to protect them against it. “As they are still young, children do not understand what sexual abuse is and how they should react when they confront it. Therefore, if they have sex education at school, they will be able to protect themselves and inform their parents when they are sexually attacked,” Fakhr El Deen said.

The Egyptian parliament is expected in the next few months to discuss violence against children and increase penalties for it. In 2014, Egypt toughened sentences for sex offenders in general to a maximum of five years in prison.

Fakhr El Deen said that the current punishment is not a deterrent in cases involving minor victims. She remarked, “Penalties against child abuse in particular should be toughened, because children are the future of this nation and they have to be well protected.”