A number of high-profile cases of sexual and physical abuse by school authorities points to the failure of the school system and government in Iran to properly address and educate on the issue. 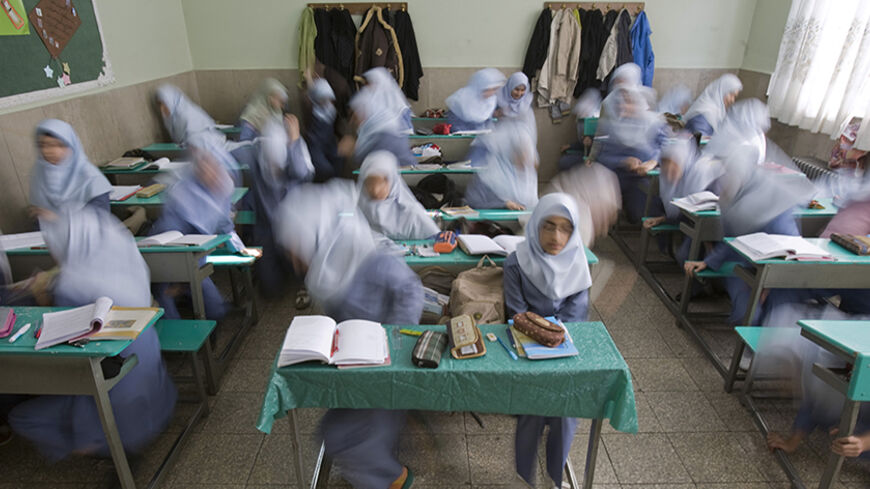 The emergence of a series of horrifying stories about minors being sexually and physically abused by their teachers or headmasters in schools and kindergartens has once again raised public concerns about students’ security in Iranian schools, where the education system has Islamic underpinnings.

“Our son is an elementary school student. A few days ago, we realized that his behavior had changed, and we became suspicious,” read an official complaint filed by the parents of a young student against the headmaster of an elementary school in west Tehran. “After speaking with our son, we realized that he has been harassed by the headmaster at school.” Following these events, a warrant was issued, and the 33-year-old headmaster was arrested on May 9. The Mehr News Agency reported on his trial.

Monika Naadi, a member of the legal committee of the Society for Protecting Children’s Rights told the newspaper Shahrvand: “We have spoken to some of these kids. They say that they have seen some of their classmates being sexually assaulted by the headmaster. However, since they did not know what he was doing, they assumed that he was disciplining their classmate.”

Only a few weeks after the story appeared about the headmaster, whose name was not been released, Iranian publications ran a story about a gym teacher who had assaulted at least 14 of his students, who were 13 to 17 years old. According to a report published by Shargh, “The investigator in charge of this case found that the young students were not only beaten, but also sexually assaulted by their gym teacher. He had forced some of the students to stand naked in front of him so he could take pictures of them.”

It's unknown how many cases similar to these are taking place in Iran. Many children are unaware of what sexual abuse is.

Abollahi said that in many cases, parents do not file a complaint because the children are too scared to say anything to them. Even if the parents do learn of an incident involving their child, they may feel compelled to “sweep it under the rug to save face,” due to societal concerns and taboos associated with victims of sexual abuse. Abollahi also said that given the difficulty of proving such cases in court, because of the bureaucratic culture of “school staff usually supporting each other,” many parents are deterred from taking the risk.

There is also the culture of media censorship of the issue. The website Tabnak reported that security officials in the Ministry of Education had promised to help the parents of abused students in exchange for their not notifying the press about the incidents.

Deputy Minister of Education Hamidreza Kaffash is also supportive of media staying out of this issue. During an interview with Shahrvand, he harshly criticized the media for covering the issue, stating: “In the West, there are five cases of sexual harassment every day, but no one hears about them. Our country is, after all, an Islamic country.” He then asked, “Where is our national sensibility?”

Abdollahi said that part of the problem with addressing these issues is that the views of the Ministry of Education toward sexual abuse are regressive and “behind the rest of the society.” She said that a quick survey of the ministry's websites and publications clearly shows that they are only interested in news stories portraying the ministry in a positive light.

The third case of abuse that made headlines involved the physical assault of a small child. A video posted on YouTube shows a kindergarten teacher pinning a young boy on the floor under her legs. She is seen force feeding him while holding his nose and periodically jamming the spoon into his mouth. In the secretly recorded video, other children can be seen running around and playing. The teacher then strikes the child several times on his head and torso before pulling him up by his hair and throwing him outside the camera’s range. After the child's family lodged a complaint against the teacher, she was arrested and the kindergarten closed.

Of course, this wasn’t the first time a video of physical abuse has been posted online. The age of the child and the violence touched a nerve among many Iranians. Benyamin, a 28-year-old philosophy graduate, has seen the video. He told Al-Monitor that he had suffered from physical and psychological abuse.

“Myself and another student were taken to a room to be punished for something we had done earlier. The room was full of kids, and our teacher told the other kids to undress us,” Benyamin said. “I was so frightened by the idea of other kids undressing me that I started undressing myself. After that, our teacher scolded us for taking off our clothes. It was only then that I realized she was not really going to let the other kids undress us. She was planning to stop them if they approached us and tell them that it is wrong to undress other people.”

He said the entire ordeal and the lesson the teacher was trying to teach caused him terrible anxiety, which he carries to this day, although he said he was never sexually assaulted by a teacher or headmaster. Nonetheless, Benyamin and other students who spoke to Al-Monitor said that many of them have heard of rapes and sexual assaults in boys’ schools. They all said that the issue of the sexual abuse of minors was never been properly discussed in Iran.

Unfortunately, the emergence of sexual abuse cases involving school officials has not prompted a discussion of the issue on social media or the press. Kaffash said that the Ministry of Education plans to implement sexual education courses for teachers, but only for those who are married. Some believe that sex education for unmarried individuals would be controversial in that it could lead to sexual corruption. Critics such as Abdollahi contend that even this measure will not be addressed by the school system.