A prominent children's rights activist told Al-Monitor that complaints of child abuse incidents have doubled since the closure of the schools amid the coronavirus pandemic. 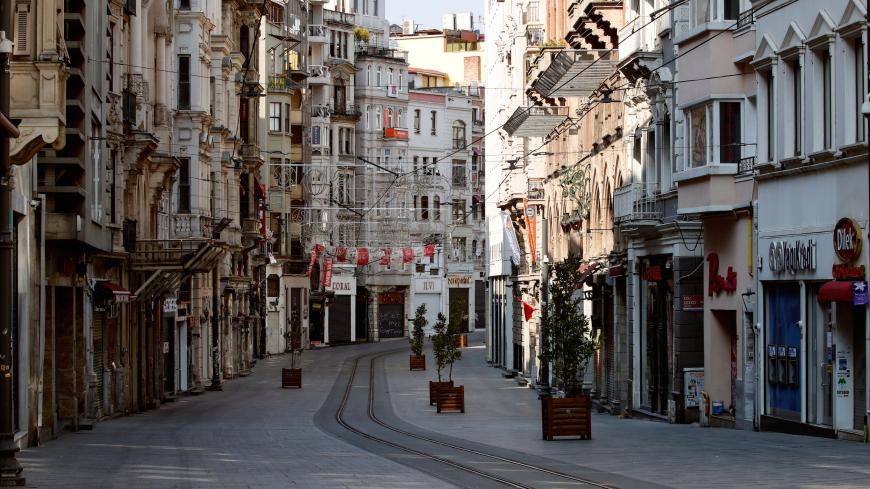 A general view shows the deserted Istiklal Street during a two-day curfew which was imposed to prevent the spread of the coronavirus disease (COVID-19), in Istanbul, Turkey, April 11, 2020. - REUTERS//Umit Bektas

Some 20 million children across Turkey are currently at home after schools were shut down nationwide March 16 to contain the novel coronavirus. The shutdown inadvertently set off an unprecedented rise in reports of child abuse and maltreatment. With more children at home, parents have more opportunities to observe them and notice warning signs of non-domestic child abuse and maltreatment. Yet, activists also warn of a spike in reports of domestic violence and abuse.

“Mothers are taking notice of their children at home. We are receiving too many child abuse complaints. My heart is broken, I feel sad, we will do everything we can to help them,” Efe wrote on Twitter.

Efe, a teacher and a laureate of the State Department’s International Women of Courage Award, rose to prominence in Turkey after she came forward to protect six students who were being abused by the principal of her school. Efe then founded a civic group supporting young victims of abuse.

The International Association for Combating Child Abuse (UCIM), based in Turkey’s Mediterranean province of Mersin, operates in 52 cities across the country, with a large network of volunteer lawyers and psychologists. The group also runs a hotline to support children and their families.

Efe said the complaints to the group have doubled since the schools closed and that the number of reports they receive daily has jumped to 9-10 from four.

“Children, feeling safe at home, tell their parents about the abuse," she told Al-Monitor. "Sometimes the abuser is an uncle or a neighbor. In very few cases it is fathers. Generally mothers take action when they find out. Some 99% of reporters are mothers.” Efe added that many other countries are facing the same problem amid coronavirus restrictions.

Private space and privacy are two important notions that children must learn about to encourage awareness of abuse, according to Filiz Budak, a counselor at UCIM.

Each child should have a separate bedroom or at least a private place to sleep in. However, maintaining personal boundaries among members of low-income families is challenging, as family members usually live and sleep in small spaces, Budak said.

Kissing children on the lips can disrupt their perceptions of private space, she added, noting that supporting children with unconditional love and trust is essential.

“You have to show kids you will love them even if they make a mistake or something bad happens,” Budak told Al-Monitor. “Children should be taught that strangers can’t touch them and who to ask for help if someone tries that. They should be told they shouldn't keep bad things secret.”

Social withdrawal, failure at school and eating disorders are among the warning signs of abuse, Budak added.

Adem Yaprak, a lawyer with UCIM, emphasized the importance of taking action. Calling on parents not to shy away from reporting abuse cases, Yaprak said complaints can be submitted through the UCIM website.

​“We have an online reporting tool on our website," Yaprak said. "Once the forms are filled online, we immediately take action. We closely follow the whole process, from the preparation of the legal petitions to trials. We show the families they are not alone.”

However, no official statistics on child abuse and maltreatment have been available in Turkey since 2017, when the Turkish Statistical Institute (TUIK) suddenly stopped releasing data on the issue.

Turkey’s state-run Anadolu News Agency reported in 2019 that 40 million children suffer from abuse globally, but there was no mention of Turkey in the report.

Gamze Akkus Ilgezdi, a lawmaker with the opposition Republican People's Party, filed a criminal complaint against the head of TUIK for withholding the information. Ilgezdi told Al-Monitor that more than 56,000 children were sexually abused in Turkey between 2014 and 2017.

Efe thinks today’s children are more confident in reporting their abusers and have digital media as a resource to educate themselves.

“We can’t sleep because of a spike in the reports," Efe said. "For peaceful kids it is great luck to spend time with their families. However, we need to run social awareness ads on TV and digital media to educate disadvantaged kids and their families."