A group of young Egyptians launched a graduation project that turned into a public campaign on sexual abuse of children in Egypt. 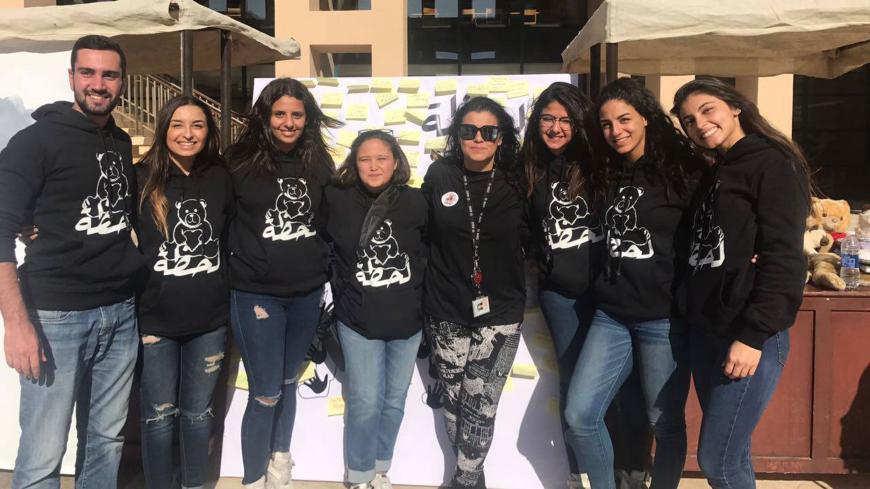 American University in Cairo students who started the Lahza campaign to raise awareness of child sexual abuse are seen in an image uploaded Dec. 2, 2017. - Facebook/lahza.official

Egyptian students at the American University in Cairo have turned their graduation project into a campaign to fight against the sexual abuse of children, which is an underreported but widely spread social problem in Egypt.

The students, who are studying at the Integrated Marketing Communications department, were asked last November to work on a social project for their graduation thesis. After many discussions, the group of seven decided to select child sexual abuse as the theme of their project. Believing that such abuse can occur within just a moment, they named their project "Lahza,” Arabic for “moment.”

"Other colleagues decided to work on various topics such as animal abuse and the rights of the disabled. But we decided to make our mission harder by tackling a topic that is considered taboo," Alia El Goan, the co-founder of Lahza, told Al-Monitor.

Lahza has several targets. It aims to raise children's awareness on what constitutes abuse and to offer support for the children who have been abused. The project also trains parents and teachers on how to detect this abuse early and how to deal with abused children.

After organizing some events inside and outside the university campus and analyzing the public response, the founders realized that the project filled a need and attracted public interest. Therefore, they decided to turn their project into something that would continue after they submitted it in December.

Goan said early in the project, they searched official statistics about the prevalence of child sexual abuse not only nationwide but worldwide. “Frankly speaking, we failed to come up with accurate figures in Egypt since the victims and their families do not report such sexual abuse," she added.

Therefore, the campaign founders resorted to international statistics. According to the US Department of Justice's National Sex Offender Public Website, as many as one out of four girls and one out of six boys have experienced some form of sexual abuse before the age of 18. "After conducting our local surveys, we found out that these figures are close to [the situation on the ground in Egypt]," Goan said.

Lahza surveyed 300 people, all of whom replied on condition of anonymity. "We found most of the victims were exposed to sexual abuse between the ages of 7 and 13. They were sexually assaulted during their childhood by family members, close friends, personal drivers and others," she said.

The campaign’s official Facebook page posted the story of one of the female victims, now in her 20s. She wrote, "I can't remember how old I was at the time. But I remember coming back from school. I went into the bedroom where my grandfather was sleeping. But I never would have expected what came next. I was scared, I kept quiet because I couldn't denounce my grandfather. I feared no one would believe me."

Besides the survey, the campaign founders interviewed four victims whom they know personally. "After such research, we found out that child sexual abuse has nothing to do with social class. It took place at both public and international schools and all social brackets," Goan said.

After finishing the required research, the campaign team launched their first event on Nov. 27, called "Education Makes a Difference," at their university to highlight education's essential role in combating sexual abuse.

"The aim of this event was to know our colleagues' reactions toward talking in public about this issue. After getting a huge response, we decided to take to the streets and shopping malls to approach the public," Goan noted. “We targeted both parents and children for multiple reasons: to defy social norms that always blame the victims and to teach parents how to protect their children and how to deal with their children if they are exposed to such horrible experiences."

On Dec. 13, they went to one of Egypt's major shopping malls. Under the theme “Narrate Your Story,” the founders gave passersby copies of the stories of child sexual abuse narrated by those who had responded to the survey. Their aim was to see whether the public would ignore or deny the existence of sexual abuse.

“To our surprise, people reacted positively to the event and admitted the existence of this phenomenon with some of them saying, 'Yes, I experienced that,'" Goan said.

After this successful event, the founders focused on raising children's awareness on abuse by working with Safe, an Egyptian nongovernmental organization (NGO) that provides the required support for victims of child sexual abuse. “We visited private schools with Safe to raise kids' awareness of this issue through interesting activities," she said. At the schools, Goan tells parents and teachers, "You can either choose to let sexual abuse leave its mark on your children or educate them. The choice is yours.”

The founders of Lahza also published tips for parents to enhance their awareness. "There are certain signs that parents should take into consideration to recognize their child has been sexually assaulted. Depression, increased nightmares and children's refusal to stay alone with certain individuals are the key signs," Goan said.

Randa Fakhr el-Din, the head of the Union Against Harmful Practices on Women and Children, said there is no accurate number of victims of child sexual abuse in Egypt since many families do not report the abuse.

"We received many miserable stories about this issue at the union. Most of the cases we have dealt with took place within families. The youngest victim was only 2 years old. This is very alarming," Fakhr el-Din told Al-Monitor.

Regarding the steps taken by the NGOs to combat this problem, Fakhr el-Din said that the penalties for child abuse were increased. Last January, the Egyptian parliament approved new amendments to the Egyptian Penal Code on child abuse, imposing heavier penalties for sexual abuse of children and the death penalty or life imprisonment for child abduction if the kidnapped child was also sexually abused.

"Deterrent penalties, of course, are very important. But what is more important is to combat ignorance and raise public awareness of this issue. In my opinion negligence is the key reason for exposing children to sexual abuse. Therefore, teaching parents how to take care of their children is a top priority. I hope more initiatives and campaigns would be launched to combat this phenomenon," she added.

After launching many events at private schools and shopping malls, Goan said they hope to address lower income classes in the upcoming period. "Surely, these brackets must be targeted since cultural stereotypes are deeply rooted there. This requires more efforts and funds," Goan added.

Presently, the campaign is funded by the seven founders. "We have prepared TV and radio ads. But as we have no financial means, the broadcast of these ads was delayed. But soon, we will broadcast them. We will complete our mission and never lose hope."