Are Egypt's students no longer safe in their own schools?

News that children have been victims of sexual assault at their own schools in Egypt has prompted civil society groups, activists and parents to look for effective ways to protect children from harassment. 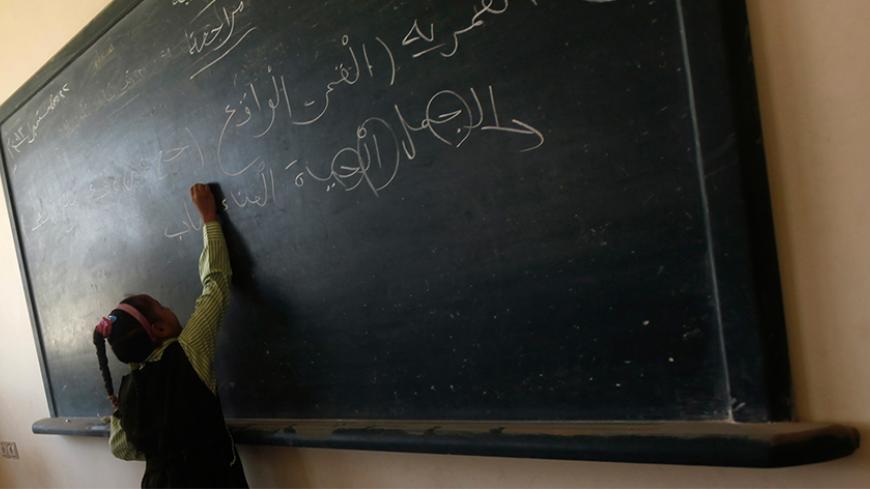 A girl writes on the blackboard on the first day of the new school year at a government school in Giza, south of Cairo, Egypt, Sept. 22, 2013. - REUTERS/Mohamed Abd El Ghany

"My three-year-old son was sexually assaulted by the security guard at his school," a mother posted on Facebook April 12 as a cry for help, only to discover that the same security guard had molested five children inside the school. After the Ministry of Education conducted an investigation, the security guard was fired and school officials were referred to the Legal Affairs Department.

Meanwhile, the case as a whole was referred to the General Prosecution of Nasr City, a district of Cairo, which ordered the imprisonment of the security guard, summoned school officials for questioning and requested a forensic examination for the child to confirm he was subjected to sexual assault.

The child's mother told Al-Monitor on condition of anonymity that school officials tried to cover up the incident at first, but as a result of the escalating media coverage, they took the initiative to question the truth behind it after the school was called upon to undergo strict security procedures to prevent security guards from entering the school buildings.

The school in question issued a statement on its Facebook page April 14 noting that the claims had yet to be proven and were still under investigation.

The child's mother added that she and a number of parents were planning to organize a protest in front of the school to demand the prosecution of school officials, but they failed to obtain permission for the sit-in.

According to Article 80 of the Egyptian Constitution, "The state shall care for children and protect them from all forms of violence, abuse, mistreatment, and commercial and sexual exploitation."

Meanwhile, the so-called Child Law stipulates that the state shall protect children from all sorts of violence, physical, moral or sexual abuse, neglect and all other sorts of mistreatment or exploitation.

Kamal Mghaith, a researcher at the National Center for Educational Research, believes that the state of chaos plaguing society makes many feel that the law is worthless and that there is an absence of ethical standards that governed people’s actions in decades past. Speaking to Al-Monitor, he stressed that it is not possible to separate between the cases of rape taking place in schools from all crises that Egyptian society as a whole suffers.

"Chaos has made its way into schools and the educational process started to go downhill," Mghaith noted, adding that the negative impact of this chaos has spread into public, private and international schools, after the latter started to only care about financial profit without paying attention to the security of students. Meanwhile, those in charge of these schools failed to recruit employees who are qualified at the educational, psychological and scientific level, and who can be trusted with children.

Mghaith stressed the need for specialized research centers to examine and determine the rates of child safety in public, private and al-Azhar-affiliated schools, due to increased incidents in which children are exposed to physical and psychological abuse inside their schools.

He warned that such incidents could force parents to resort to private lessons instead of sending their children to school, which threatens the educational process as a whole.

Mghaith believes that the laws that punish the perpetrators of these crimes do not present an effective deterrent, saying that the Ministry of Education has only administrative penalties that take a lot of time to apply. He also stressed the need to amend the child law, speed up the justice procedures and not limit the penalties to administrative ones, but rather treat the matter as a criminal case from the beginning.

He called on making all educational institutions in Egypt follow policies to open clear channels of communication with children through psychologists and social workers whose role would be to talk to the children about their problems without fear. "There should be a background check for the staff who deal with children and they should only be hired following psychological and behavioral tests."

The head of the Children's Defense Network in the Egyptian Bar Association, Ahmad Mosilhi, told Al-Monitor that between January and April 2016, his network received information on about 20 cases of rape and harassment of children in schools.

"The slow pace of court proceedings is resulting in the loss of the concept of justice as a whole," said Mosilhi, who believes that some parents of victims of such crimes resort to individual revenge because court sentences take a long time to issue. At the same time, he criticized the work of forensics who sometimes cannot find proof of assault on the victim because they use old devices that can only prove if a complete rape was committed and not an assault.

The Egyptian penal code imposes heavy punishments on those convicted of raping and assaulting a boy or girl. Article 267 stipulates the death penalty for anyone who rapes a girl, whether they are the victim’s relatives or are in charge of rearing or observing the victim, while anyone who assaults a boy or girl without force or threat shall be imprisoned for no less than seven years.

Despite the harsh penalties, Mosilhi said that the law differentiates between male and female in this regard; when a girl falls victim to assault, it is considered rape. But when the victim of the same assault is a boy, it is considered sexual abuse. He also demanded to amend the penalty, so those who assault a boy or girl would receive the same penalty, which could be the death sentence in certain cases.

"There is no clear list for the protection of children in schools," noted Mosilhi, who added that despite the repeated decisions taken by the Ministry of Education to protect children at all schools in Egypt, there is no clear list of sanctions for those who commit psychological or physical assault against children. In addition, he said, parents do not have clear means to complain should their children fall victim of assault.

"Himaya" (Protection) is a campaign launched by Iman Ezzat, professor of philosophy at the Faculty of Specific Education in Cairo University, to educate children and their parents about sexual harassment. The campaign was first launched in 2011; it employs approximately 50 volunteers and has organized several training sessions in all Egyptian governorates.

Ezzat told Al-Monitor that she uses songs and games to teach children how to protect themselves if someone tries to approach them or touch their body; she also seeks to train parents on how to use educational and scientific ways to protect their children from harassment.

The campaign organizes training sessions in schools during which professors meet with children and their parents, but Ezzat stressed the difficulty of organizing these sessions in public schools, which need a permission from the departments of education and security at the Ministry of Education, noting that about 80% of the schools that hosted the campaign activities were private schools.

"Dozens of children are subjected to sexual harassment by their peers, teachers or workers in both public and private schools,” noted Ezzat, adding that they receive dozens of complaints on their Facebook page from mothers asking for advice after their children fall victim to sexual harassment.