Has the victory of US President-elect Donald Trump reignited Israeli Prime Minister Benjamin Netanyahu’s dream of becoming an all-powerful president of Israel? 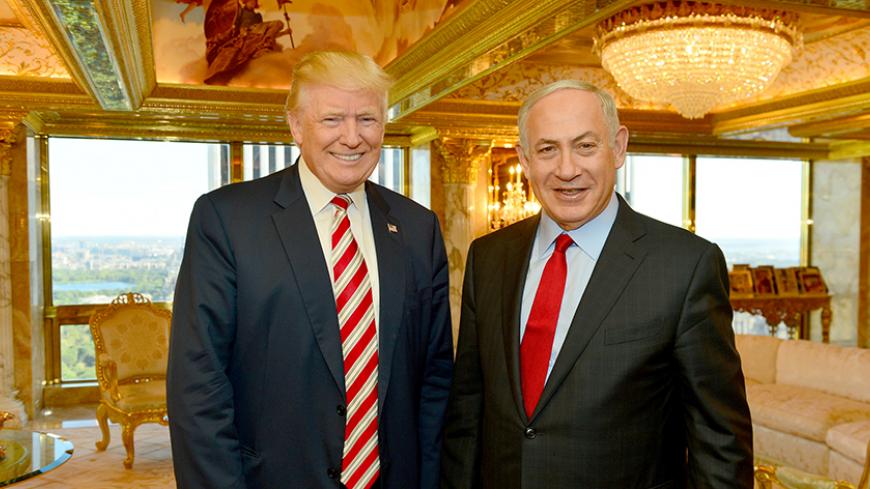 When he first assumed the prime minister’s office in 1996, Netanyahu had a dream: to establish a White House in Jerusalem. In his worldview and essence, Netanyahu is more an American politician than an Israeli one. He despises the Israeli governmental system, which he feels ties the hands of the elected leader and leaves him at the mercy of nonelected functionaries and the entire governmental apparatus. Netanyahu’s ideal model is that of the American presidential system, in which the president enjoys a guaranteed four-year term of office and sweeping powers to boot.

In his first term of office, Netanyahu tried to call the director of his office his “chief of staff” and aspired to change the system of government. His efforts crashed when the inexperienced Netanyahu succeeded in antagonizing the entire political system and lost an early election to Ehud Barak with a wide margin.

But his dream endured. In recent weeks, Netanyahu has again expressed his hopes for change, this time out loud. At first, as Donald Trump’s against-all-odds victory in the US elections stirred Netanyahu’s imagination, he confided to others in private conversations. “We need to be like Trump,” he repeated to ministers and close associates, a political source told Al-Monitor on condition of anonymity. On Dec. 11, Netanyahu spoke openly at a Cabinet meeting. "Trump can make 4,000 appointments. We should be able to make a few hundred appointments that don’t need a tender,” Netanyahu told the ministers. “We also need to be able to govern.”

Israel’s system of government puts tight limits on the number of political appointees and personal appointments that government ministers can make. A large percentage of government positions require a formal tender, while other senior posts require that appointment committees be set up to submit their recommendations to the appropriate ministers. Ministers are able to make a very limited number of political appointments. At that last government meeting, numerous ministers complained that they find it difficult to appoint and fire senior officials in their ministries due to the complex procedures guiding the appointment committees. Netanyahu agreed. It was exactly the sort of complaint he was waiting for, the perfect opportunity. The civil service apparatus should focus on appointing mid- and low-level officials, while allowing the ministers to make high-ranking appointments without tenders, he said, complaining that the regulations “won’t let us run the country" and arguing, "It is a fact that the IDF [Israel Defense Forces] chief of staff is not appointed by an appointment committee and neither is the police inspector general, yet it works well.”

But what Netanyahu forgot is that Israel does not have the system of checks and balances that exists in the American presidential model. Israel has no constitution, no bicameral legislature, and its prime ministers are not limited to two terms of office like in the United States. Netanyahu is trying to appropriate the advantages of the American presidential model without the corresponding limitations.

The truth is that Netanyahu has already completed most of his takeovers of the governmental apparatus: Netanyahu wangled his choice of legal adviser to the government and attorney general for two consecutive appointments (Avichai Mandelblit and Yehuda Weinstein), and he crowned the current police inspector general (Roni Alsheikh) as well as the state comptroller (Joseph Shapira) and other regulators and legal gatekeepers. But the prime minister is not satisfied. He wants absolute rule free of external surveillance, regulation or intervention of any kind.

Netanyahu is looking around with jealousy: To the north he sees Turkish President Recep Tayyip Erdogan, who progressively strengthens and widens his power and authority. He is jealous of Trump in the United States, who appoints whomever he wants and in many cases doesn’t answer to anyone but himself. Netanyahu’s last election in Israel served to greatly intensify his self-confidence and washed away the last remnants of the inhibitions and fears that plagued him in earlier terms of office. Netanyahu of 2016 seems to have come to the conclusion that he simply hasn't been allowed to rule Israel properly, and now the time has come.

Netanyahu and his associates have closer, more extensive ties to Trump than have been reported by the media. Netanyahu has held open channels to Trump for a long time. Ambassador Ron Dermer has close ties with the president-elect and his people. Mossad head Yossi Cohen has held a number of meetings on sensitive issues in the United States with high-ranking officials of the next administration.

In an interview with CBS on the TV show "60 Minutes," Netanyahu surprised everyone by saying that Trump would help him promote the “vision of the two-state solution.” In this statement, Netanyahu expressed support for declarations uttered by Trump himself, who spoke of hopes of bringing an end to the Israeli-Palestinian conflict. Netanyahu hopes to establish a close, unprecedented alliance with the American president as soon as possible. Netanyahu feels that Trump’s policy and general direction will be determined in the early stages of his presidency, in his very first steps. And he wants to be as close as possible when it happens.

On his way, though, Netanyahu has burned a lot of bridges to large swathes of American Judaism. The enthusiastic seal of approval he gave Trump in the CBS interview together with other declarations aroused great anger among much of American Jewry, which is strongly liberal and Democratic. Trump’s rise to power provoked anti-Semitism. Many American Jews feel that the earth is starting to burn under their feet. While they worriedly follow developments, along comes the prime minister of the Jewish state giving his seal of approval to the new administration while ignoring the emotional turmoil and distress of the American Jewish community.

Netanyahu hears the criticism but elegantly ignores it. As far as he is concerned, the yellow brick road to the White House, off limits to him in recent years, is now open, and taking it is in Israel’s supreme interest. Netanyahu said in the CBS interview that he will encourage Trump to revoke the nuclear agreement between Iran and six world powers. According to the Israeli prime minister, there are several ways that this goal could be accomplished.

As of today, Netanyahu still believes that Trump meant what he said when he talked about revoking the nuclear agreement and moving the US Embassy to Jerusalem. Netanyahu has opened an offensive on two fronts. On the domestic side, he intends to try to rule “like Trump.” On the foreign affairs side, Netanyahu hopes that Trump will follow the lead of the Israeli prime minister.