Can the Chinese save Israel's tourism industry? 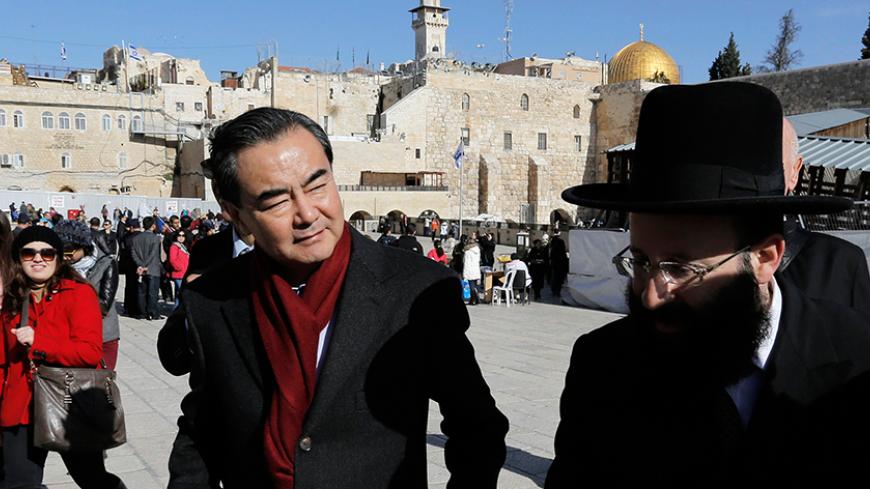 From his office in Jerusalem, Uri Taub is "dealing with half of humanity," as he describes it in a conversation with Al-Monitor. As director of the Asia and Pacific Marketing Desk at the Tourism Office Marketing Administration, he is in charge of Asia and countries where there is no Israeli diplomatic representation. He's responsible for marketing Israel to countries such as India (1.25 billion potential clients) or China (1.36 billion potential clients).

China is considered the holy grail of international tourism. The middle class there is flourishing, and as it gets financially stronger, it adopts Western tourism habits. “The number of Chinese tourists worldwide has grown from just a few million individuals to about 120 million in 2015,” said Taub. Obviously, Israel wants a slice of that pie. It has been trying for years to increase the number of Chinese tourists visiting the country. Current Tourism Minister Yariv Levin said back in 2015 that “almost nothing was done” about the issue in the years before he took office.

Taub is no longer alone. After considerable efforts, Israel sent its first tourism attache to China this year. Taub said, “What is needed there is the presence of a professional, a person with status who gives off an air of dignity. It is not yet at the same level that it is in North America, but it is a beginning.” He claimed that the appointment of the attache was just part of the many efforts that Israel is investing in the Chinese market, in addition to encouraging tour guides to learn Chinese, encouraging hotels to offer Chinese breakfasts and posting Chinese signage in central locations. Israel is also busy removing obstacles to Chinese tourism by granting visas for 10 years instead of just a few months. There are now direct flights from Beijing to Tel Aviv by China's Hainan Airlines. Taub believes that granting an automatic visa would also help.

Taub says that as part of the efforts to recoup the damages from 2014’s Operation Protective Edge, the Ministry of Tourism's general marketing budget increased by more than 100 million shekels ($25.9 million), and now stands at 300 million shekels ($77.7 million). Of that sum, 15 million shekels ($3.8 million) are devoted to the Chinese market, a leap up from years at 1-2 million shekels ($259,000-518,000). Taub does the calculations. “Chinese tourism accounts for 1.5% percent of all tourism to Israel, but it [now] gets 5% of the budget.”

The Tourism Ministry hopes to bring 100,000 Chinese tourists to Israel in 2018 to help pull the industry out of its slump. This target represents a relatively slow rate of growth, as in 2015 alone, the number of Chinese tourists visiting Israel increased by 45%. Taub estimates that if Chinese tourism continues to grow over the next three years at the same rate, almost 150,000 Chinese tourists will visit in 2018, including business tourists, Chinese Christian pilgrims and regular recreational tourists.

Taub says that the 2015 growth was considered sensational. It almost made up for an otherwise awful year for tourism resulting from Operation Protective Edge and the eruption of a new wave of terrorism toward the end of the year. It appears that the Chinese are less concerned than other groups about security issues. In contrast, their Japanese neighbors are “super-sensitive to the security situation here,” according to Taub.

Despite the impressive increase in Chinese tourism, the 47,000 visitors represent a tiny drop at about 0.04% of all of China's overseas tourism.

The first few months of 2016 have seen a moderate rise in the number of Chinese visitors to Israel. There were some 13,600 Chinese tourists from January to March, an increase of just 21% compared to last year, "which was the record for Chinese tourism, and which included the Chinese New Year," Udi Gimmon, the owner of the tourist site Yama va-Kedma (East and West), told Al-Monitor. His site specializes in tours for Chinese visitors.

Taub said, "You have to think about … the number of tourists who come but also about the growth potential and amount of money that they spend here. Chinese tourists are among the most profitable tourists in the world. They are known for spending lots of money.”

But not everyone is optimistic. Noaz Bar-Nir, president of the Association of Israeli Hotels, reportedly believes that the industry will not recover from Chinese patronage alone. Instead, he recommends focusing on the bread and butter of Israeli tourism: Jews and Christians. Gimmon agrees with him. “We shouldn’t rely on them to be our saviors,” he said. “It is a nice slice of the market, but it won’t replace North American or European tourism. … What is needed is a real long-term plan.”

What Gimmon means is that Chinese tourism requires an enormous investment "because of the demands of the Chinese tourist." He said that workers in the Israeli tourism industry are already familiar with these demands. The Chinese tourist wants a local guide who speaks Chinese, signage in Chinese and Chinese food. As local hoteliers have discovered, they even expect to find a comb in their hotel rooms so that they don’t have to bring one from home.

"Most Chinese tourists visit nearby countries," said Gimmon. “Chinese recreational tourism to the United States, South America and Europe does not add up to 120 million people. Besides, Israel is expensive, and that deters people from coming. Then, even if 200,000 Chinese visit Israel tomorrow, where exactly will they sleep? There aren’t enough hotel rooms in Israel.”

Gimmon suggested focusing on two things. The first is encouraging students of Asian studies to join the tourism industry, “not just as tour guides in Chinese, though they are certainly in short supply. But they are also needed as agents, clerks and concierges.” Even more important than that, he continued, is planning for their visits. “Chinese recreational tourists get more or less the same tour that Chinese Christians get: Nazareth, around the Sea of Galilee and countless churches in Jerusalem. The Chinese see it as a waste of Israel’s potential.”

So what do the Chinese really want to see? "Kibbutzim," said Gimmon. "The Chinese come from a communist country, and they are delighted to see the cooperative model work, at least on paper. They want to see historical geography such as Mount Bental. They can experience the stories there with Syria right in front of them. Also, a lot more nature: Hula Lake with its cranes, Ein Gedi, the Banias. We don’t bring them to these kinds of places enough.”