Egypt's tourism sector is working to attract the largest possible number of tourists to offset its recent heavy losses, especially in light of the sharp decline in Russian tourism. 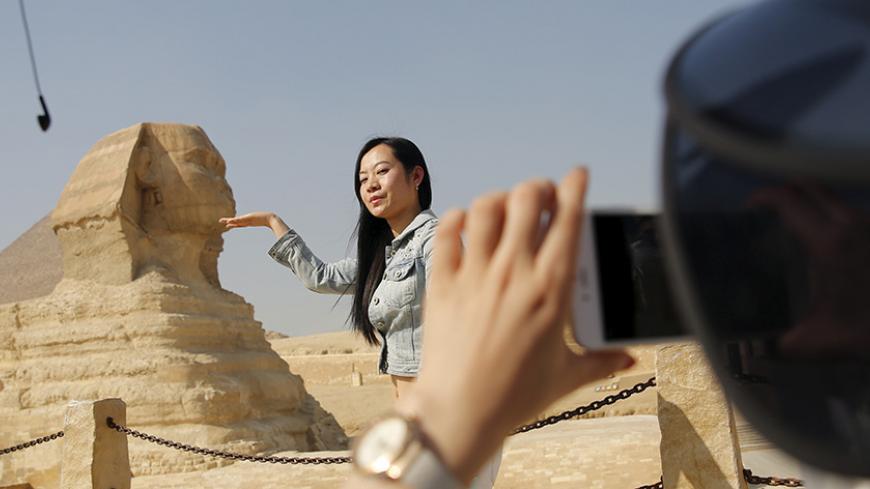 A Chinese tourist poses for a photo in front of the Sphinx at the Giza Pyramids on the outskirts of Cairo, Egypt, March 2, 2016. - REUTERS/Amr Abdallah Dalsh

Following the Russian plane crash in Sinai on Oct. 31, 2015, Russian President Vladimir Putin approved a proposal by the Russian Federation's Federal Security Service to suspend flights to and from Egypt.

In mid-July 2016, sources in the Egyptian Ministry of Civil Aviation said that Russian flights to Egypt would resume shortly, after the Russian side verified Egypt's improvements in airport security, especially that Egypt abide by the necessary international security requirements in airports.

However, Egyptian Tourism Minister Yehia Rashed said during a phone call with TV show "Innfrad" on Al-Aseema TV Feb. 27 that there is no definitive information available about the resumption of Russian flights to Egypt.

Tourism revenue in Egypt plummeted in 2016, reaching $3.4 billion compared to $6.1 billion in 2015 — a decline of 55.7%. This decline was due to the sharp fall in Russian tourism in Egypt by 97.7%, according to the Central Agency for Public Mobilization and Statistics.

Magid al-Banoudi, an expert in European tourism affairs, in a Sept. 22 interview with El-Badil, also cited the decline in Russian tourism to Egypt, which represented more than 40% in 2015. The number of Russian visitors to Egypt was between 100,000 and 250,000 people a month before the Russian plane crash at the end of 2015. In 2014, the number of Russian tourists in Egypt reached 3.1 million out of a total of 9.9 million foreign tourists in Egypt.

At that time, Egypt's Tourism Ministry began to focus more on the Chinese market, as China was ranked among the top 10 countries with the largest number of tourists visiting Egypt, according to the ministry’s records for 2016. Egypt seeks to facilitate the granting of entry visas for Chinese visitors, and is even considering exempting Chinese tourists from obtaining visas.

Ahmed Shukir, the head of the Foreign Tourism Department at the Egyptian Tourism Promotion Authority, said in a Feb. 12 press statement that China has become a significant market for Egypt, with about 180,000 Chinese tourists visiting Egypt in 2016, a 55.8% increase from 2015.

On May 31, 2016, Egypt and China signed a tourist exchange agreement to bring the number of Chinese tourists visiting Egypt to 1 million by 2020. That same month, Egypt won a most famous tourist destination award in the annual Shanghai World Travel Fair.

Rashed stressed that the Chinese tourism market is one of the largest in the world, with about 120 million tourists a year. However, he emphasized the need to study the Chinese market's requirements and factors that will help Egypt attract Chinese tourists, such as shopping and recreational activities. He said that the ministry is ready to carry out a promotional campaign in China for Sharm el-Sheikh, one of the most important tourism areas of southern Sinai.

Hala al-Khatib, the director-general of the Egyptian Tourism Federation, told Al-Monitor, “The recent period witnessed a sharp decline in tourism in Egypt, not only because of a halt in Russian and British tourism, but also due to tourism policies in Egypt that need to be reviewed.”

She added, “Chinese tourism is important for Egypt, as there are 120 million Chinese tourists in the world. Therefore, Egypt must make a greater effort to further attract Chinese visitors. Even amid the current increase in the Chinese tourist traffic to Egypt, the number of Chinese tourists remains low, and Egypt still needs a larger number to offset the losses incurred by the tourism sector in 2016.”

Nabil continued, “We hope that the number of Chinese tourists to Egypt will exceed 300,000 this year and that Egypt will attract 1 million Chinese tourists by 2020 — a relatively easy task that can be achieved through greater partnership contracts between Egypt and China and an expansion in the air traffic between the two countries.”

On Nov. 28, 2016, the Association of Travel and Tourism Agencies, which is affiliated with the Chinese Ministry of Tourism, noted that Egypt is a top destination for Chinese tourists who are lured by the beauty of Cairo, Luxor and Aswan. The association also confirmed that the number of Chinese tourists in Egypt is on the rise.

A Chinese governmental report issued in early February revealed that Egypt is one of the most prominent tourist destinations for the Chinese during the Chinese New Year in January. The report credited Egypt's popularity to the Chinese being easily granted entry visas to Egypt.