The Russian invasion of Ukraine, as well as China maintaining strict COVID-related travel regulations, could present obstacles to a tourism recovery in Israel. 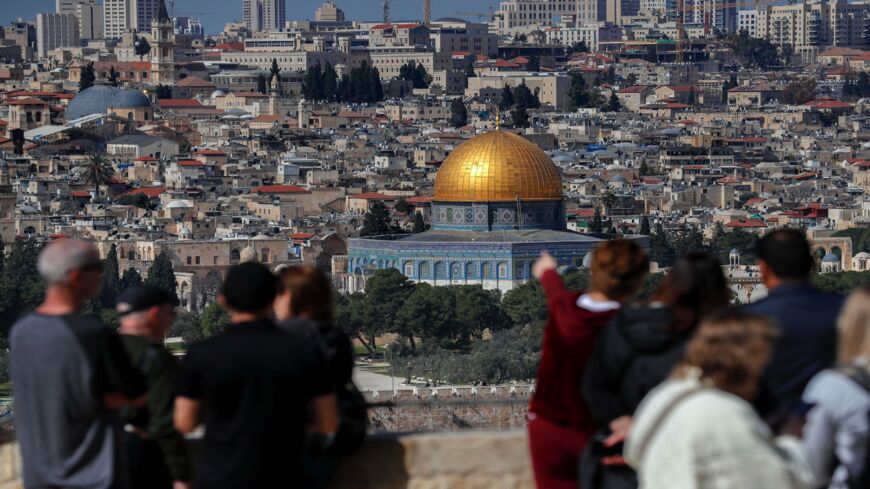 Tourists stand at the Mount of Olives overlooking Jerusalem's Old City and the Dome of the Rock in Al-Aqsa Mosque compound on Feb. 18, 2022. - AHMAD GHARABLI/AFP via Getty Images

After being closed for two years due to the COVID-19 pandemic, the Israeli inbound tourism sector has reopened. In early March, the government approved the entry of tourists, including the entry of unvaccinated visitors subject to testing upon arrival.

Local tour operators are expressing cautious optimism. The number of coronavirus cases have recently risen again, and senior Health Ministry officials have already hinted that in the event of a significant rise, some restrictions, including closing the airport to incoming tourists, could be reinstated.

The forced shutdown of the Israeli tourism sector followed a record year. In 2019, Israel hosted 4.6 million tourists, a 10.5% jump compared to 2018 and an all-time high. Revenue from inbound tourism that year reached 23 billion shekels ($6.5 billion).

According to tour operators, the characteristics of Israeli tourism will help the sector recover relatively quickly. Danny Amir, chairman of the Israel Incoming Tour Operators Association, explained to Al-Monitor that Israel is not only considered a safe destination but also enjoys "committed tourism." Amir said, "We returned to operations a few weeks ago and are seeing huge demand. Pilgrims want to come to Israel, and the advantage of these types of tourists is that they do not cancel their travel plans but only postpone them."

The companies operating in the sector, as well as the Ministry of Tourism, have no illusions that recovering 2019 figures is impossible this year. There is consensus that if no new restrictions are imposed on activity, 2022 could end in the best-case scenario of recovering 40% to 45% of activity, or around 2 million tourists.

In 2019, the highest number of visitors was from the United States at more than 1 million. After the United States, the countries from which most visitors came to Israel include Russia, France, Germany, Britain, Italy and Ukraine. At the moment, it seems that Russia and Ukraine will not be sending a significant number of tourists this year. However, Deputy General Director of the Ministry of Tourism Kobby Barda believes it is too early to assess what will happen. "Tourism from Russia to Israel is significant. It includes tourists who like 'sun vacations' mainly in Eilat, but also pilgrims. At the moment, it seems that there will be a problem with the traffic from there, but we have yet to reach the summer and we are optimistic."

The war in Ukraine does not deter tour operators either. War images never help tourism, said Amir, but he asserted that the Israeli tourism sector currently faces bigger challenges. For example, the fact that the Asian market, especially China, is not expected to reopen to tourism until the end of the current year is a source of concern. This prompts the need for the Israeli market to penetrate other destinations such as Africa and South America. Barda said that the Tourism Ministry is directing most of its marketing efforts through a massive campaign to the UAE market. In addition, there is an initiative to launch direct flights to the Philippines to encourage tourism from this key market.

But alongside the optimism, there is also concern about the chances of recovery. One of these factors is the increase in the price of tour packages to Israel compared to 2019, which according to market sources is estimated at 30% to 35%. Rashid Abu Hanna, who for the past 34 years has been running a Nazareth-based travel agency specializing in inbound tourism, claimed that the reason for the price hike is related to the economy, but not only that. "The package we are offering today for American tourists is at least 30% more expensive compared to 2019, and this is due first and foremost to the strength of the shekel against the dollar. In addition, the global price increase is raising the prices of meals, transportation, etc." But according to Abu Hanna, Israeli tourism service providers have also raised prices. "Unfortunately, hotels have not learned a lesson (from the last two years) and raised prices. Today it is an almost impossible task to book hotel rooms [in the future] like May 2023."

The renewal of tourism traffic to Israel, important as it may be, will not succeed in hiding the challenges it is faced with in this post-coronavirus era. One of the main challenges according to Barda is the severe shortage of manpower. The Israeli Ministry of Tourism estimates that the sector is short of at least 5,000 tourism workers, and efforts to recruit them are ongoing.

Joseph Fischer, a prominent tourism and aviation expert, defined the shortage of workers as the "bottleneck" of the Israeli tourism industry. He estimates that the shortage reaches 20,000 workers. "This is a critical shortage throughout the industry, from cleaning workers to drivers and tour guides," he explained to Al-Monitor.

Amir claimed that the shortage of manpower has been accelerated by the pandemic but that this is a consequence of a wrong policy taken over the years. According to Amir, the state does not treat the tourism sector as a "national resource" in terms of revenues and employment, and therefore there are no programs, for example, in vocational training. Even the treatment of tourists entering these days, according to Amir, is not welcoming enough when a tourist is sometimes led to spend hours going through airport security before they can enter. Barda agrees that not everything is perfect but emphasizes that the attention received by the tourism industry during the crisis has surpassed that of other industries in the economy through budgets, organizing conferences and exhibitions, and connecting with relevant entities abroad.