Israeli experts do not expect tourism to reach this summer the record level of 2019, but they certainly notice a trend of increase on both outbound and incoming tourism. 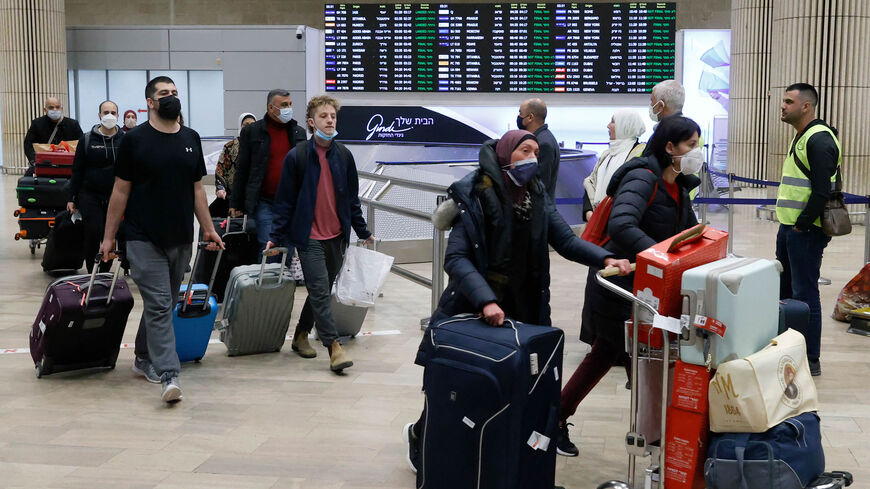 Israeli passengers arrive from Ukraine via the border with Romania on an Israeli Israir flight at Ben Gurion Airport in Lod, near Tel Aviv, Israel, March 1, 2022. - Jack Guez/AFP via Getty Images

Israeli tourism this summer is expected to register its best performance since 2019. The removal of coronavirus restrictions is set to boost outbound and incoming tourist numbers, although the record posted in the year preceding the pandemic at Ben Gurion Airport — about 24 million international passengers — is not expected to be surpassed in 2022. In terms of incoming tourists, Israel is still far from the peak of 2019 — about 4.5 million tourists — and according to estimates for the current year, the figure will come to roughly 2 million.

Despite the lower numbers, it is hard to escape from images published in the media in recent weeks regarding congestion at the airport, which has raised questions about the ability of Israel's aviation and tourism infrastructure to cope with the rapid increase in activity.

Currently, the most serious challenge that the Israeli tourism industry is facing is the shortage of manpower that exists at the major entrance gate of the country, but also in other professions within the tourism industry.

Ofer Lefler, spokesperson for the Israel Airports Authority, told Al-Monitor that the global aviation industry is in a deep crisis, and Israel is no different. Therefore, there are delays and congestion mainly for departing passengers.

According to Lefler, the problem in Israel is greater due to the shortage of security personnel, which is relatively high in Israel compared with other countries. Before the coronavirus pandemic, the Israel Airports Authority employed 1,800 security personnel. Today, the number is less than 600. The number of flights should return close to what it used to be in the coming months, but increasing the number of security personnel remains a challenge. Still, the authority decided to make every possible effort not to cancel flights, which explains the congestion experienced in recent days. To the lack of manpower, Lefler noted, one should add the habit of Israeli passengers to bring with them quite a lot of luggage when traveling abroad.

Lefler added, "In 2019 it took an average of 54 minutes for a passenger from the moment of arrival at the terminal until passing all the inspection stages and reaching the duty-free area. Today, it takes 70 minutes. My task is to reduce this time frame to less than an hour."

Joseph Fischer, a prominent tourism and aviation expert, agrees that the main problem at the airport is a shortage of manpower. He predicts that it will take at least 12 months to catch up, mainly because of the average profile of Israel’s airport security personnel. Unlike other countries, these are mostly young people after their army service who take up these jobs for a limited period of time, without long-term career aspiration.

"The problem is that the young people who worked at the airport before the coronavirus pandemic [and were laid off] have since found new jobs. They won’t return because these jobs at the airport are considered precarious, and without any long-term career prospect," Fischer told Al-Monitor.

He anticipates even greater congestion problems at the airport in July and August, when more than 100,000 passengers will pass through the airport every day. Both him and Lefler emphasized that Israeli tourists should get used to traveling without luggage or with little luggage, if they hope to shorten the waiting lines.

Like outgoing tourists, the number of incoming tourists is also expected to be lower compared with 2019. Nevertheless, the hotel sector faces significant challenges. Prices have gone up significantly, and like at the airport, the sector is confronted with a manpower issue.

Yael Danieli, CEO of the Israel Hotel Association, told Al-Monitor that for the moment the tourism infrastructure in Israel is in excess supply and far from realizing its potential. The number of incoming tourists is still rather low, so there are certainly hotel rooms remaining empty. Still, Danieli and other officials in the tourism industry hope that the increase trend will continue at full speed. According to Danieli, there are 57,000 hotel rooms in Israel, but in the coming years this number is predicted to increase significantly.

Anticipating the increase in incoming tourists, Israeli authorities are preparing on different levels. At the end of May, the Tourism Ministry announced it had received 107 applications for grants to build new hotels or expand existing ones. Reports from June 7 said that the Tourism Ministry has earmarked 165 million Israel shekels ($48 million) in grants to support plans for the construction of new hotels and new hotel rooms across Israel.

According to Danieli, most of the new hotel rooms will be built in Tel Aviv, Jerusalem and Eilat. She also explained that increasing the number of rooms is the most efficient way of lowering the relatively high prices of hotels in Israel. She noted that the government should simplify and shorten the construction processes of hotels, which on average takes eight years. In other Organization for Economic Cooperation and Development countries, the average time for the construction of a hotel is three years only.

Concerning the manpower, Danieli explained that during the peak year of Israel's tourism, some 42,000 workers were employed in the hotel industry. Today, 34,000 have returned to work. Efforts are made to fill the gap by bringing in workers from the Philippines, Jordan as well as Palestinians.

Danieli stressed that in order to promote the future increase in the flow of tourism, authorities must formulate a long-term plan, which must be considered as a national project.

Fischer agrees and concluded, "Tourism is a strategic business and should be planned a decade ahead. The problem in Israel is that we are talking about a new plan every few months, and plans go as far as the next election only, without any longer horizon. For Israeli tourism to prepare for the future, it must be separated from the political game."