Russia officially resumed flights to Egyptian resorts after a six-year hiatus, sparking controversy amid accusations that the government ceded too much authority to Moscow. 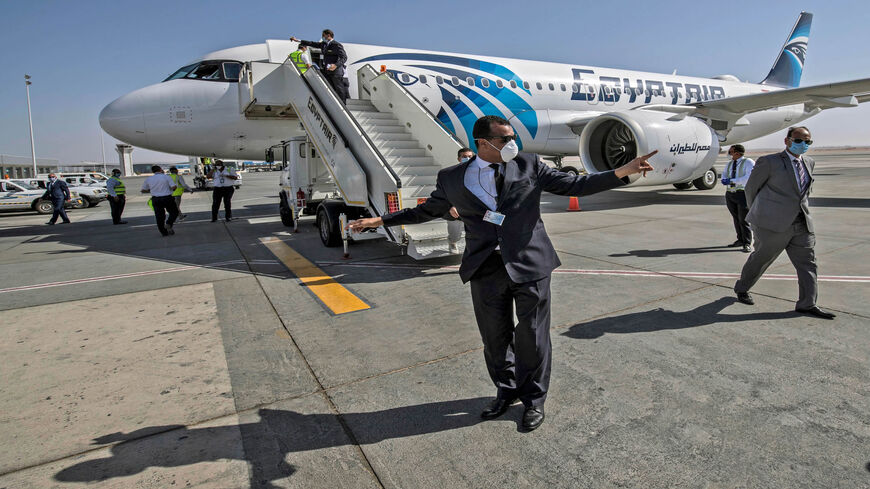 CAIRO — A flight that took off from Russia, carrying on board 300 Russian tourists, landed at Egypt’s Hurghada Airport on Aug. 9, for the first time in nearly six years.

The next day, the airport in Sharm el-Sheikh received the first EgyptAir flight from Moscow, also after a six-year hiatus.

On Nov. 6, 2015, Russian President Vladimir Putin ordered the suspension of all flights to Egypt after a Russian charter flight ferrying more than 200 passengers crashed in the Sinai Peninsula on Oct. 31, 2015. In April of this year, Moscow agreed to resume flights to Egyptian resorts.

The decision to resume flights between Moscow and Cairo sparked controversy in Egypt, amid accusations that the government placed the Egyptian airports under Russian control and allowed Russian experts to be present there, in exchange for flights to resume between the two countries.

The accusations came following a visit by a 15-member Russian security delegation to the airports of Sharm el-Sheikh and Hurghada on Aug. 8, to inspect travel procedures. The airport authorities assigned one service counter and two halls for Russian tourists arriving and departing from Egypt, according to airport sources quoted by Egypt Independent.

On July 26, Egypt’s Minister of Civil Aviation Mohammad Manar Enabah told Egyptian TV host Ahmed Moussa by phone during his show “Ala Mas’uliyati” ("My Responsibility") on Sada El-Balad TV channel that Russian observers will be permanently stationed at Hurghada Airport to ensure that the Russian travel procedures continue to be enforced.

Enabah said that the observers’ role involves following up on airport and passenger security procedures, such as metal detectors, a safe route from the airport to resorts, random screening of passengers, security rooms, surveillance cameras for passengers and luggage storage facilities, as well as assigning a boarding gate for Russian flights.

On June 2, a Russian security delegation inspected the Egyptian airports. In a meeting with Egypt’s deputy minister of civil aviation, the delegation discussed all security measures applied at arrival and departure, as well as passengers and luggage screening procedures. They also discussed the measures adopted by the ministry to prevent the risk of exposure to the coronavirus.

Russian Transportation Minister Maksim Sokolov had said on March 25, 2016, that his ministry intends to inspect safety measures at all Egyptian airports.

Soha Bahgat Mohamed Farag, adviser to the Egyptian minister of tourism and antiquities and official spokeswoman for the Ministry of Tourism, told Al-Monitor that Egypt has opened its doors to Russian experts to inspect the measures that Egypt has taken to ensure the protection and safety of Russian tourists, especially in light of the coronavirus pandemic.

She said that it is normal for Russian experts to be present at the airports to check on the procedures Egypt has taken for the safety of Russian passengers.

On May 14, an Egyptian political source told Al-Araby Al-Jadeed that Egypt agreed to the appointment of Russian security officers at Sharm el-Sheikh and Hurghada airports to speed up the resumption of flights to these cities, as the Russian tourists consist of an important source of income for Egypt.

The source said that during talks with Moscow, Egyptian officials expressed reservations about the latter’s request to appoint Russian officers at Egyptian airports, considering them a breach of sovereignty that could pose a threat to national security. According to the source, Egypt eventually agreed to the Russian request after the Russian team inspecting the Egyptian airports identified a mistake made by the police at Sharm el-Sheikh airport following the 2015 Russian carrier’s incident, which the Russian observers communicated with Putin.

The source pointed out that the authorities at the Hurghada and Sharm el-Sheikh airports assigned special stations inside these airports for the Russian observers who are overseeing security of the Russian flights to the two cities.

Farag said that the Ministry of Tourism lifted all obstacles to the arrival of Russian tourists to Egypt, and the Egyptian teams rehabilitated airports and hotel facilities, especially in the cities of Sharm el-Sheikh and Hurghada, in cooperation with the Russian teams.

On May 7, Hisham al-Damiri, former head of the Tourism Promotion Authority affiliated with the Ministry of Tourism, said that Russian tourism is a main artery of the Egyptian tourism sector, as Russians consist of nearly 30% of the total number of tourists in Egypt.

On Aug. 9, Ahmed Khaled Mamdouh, deputy head of the Conference Party for the Central Administration and Follow-up, said that Russian tourists represented more than 60% of the total number of tourists in the Red Sea before 2015.

In an Aug. 12 interview with Russia Today, Minister of Tourism and Antiquities Khaled al-Anani said that Russia has been the top source of tourists arriving in Egypt for years. In 2015-16, the number of Russian tourists exceeded 3 million, he noted.

Anani continued that the Russian tourists represented more than 50% of the total number of tourists in Egypt, which shows how important the Russians are to the Egyptian tourism sector.

Farag noted that Russian tourists to Egypt largely contribute to the country’s gross domestic product, pointing at the major impact the suspension of Russian flights had on the Egyptian economy.

In an attempt to calm public opinion over the presence of Russian teams at the airports, Red Sea Gov. Maj. Gen. Amr Hanafi said in a phone interview on Sada al-Balad TV channel on Aug. 9 that Egypt has full sovereignty over its airports, and there is no interference from the Russian side in the management of airports. Their role is limited to providing remarks, he noted.

Hanafi concluded that the Russian side has the full right to examine the procedures at the Egyptian airports and to monitor security measures, and that their presence is normal and it happens in all countries.