The Egyptian tourism sector is looking to Russia to boost the industry after a major decline following a Russian plane crash in 2015. 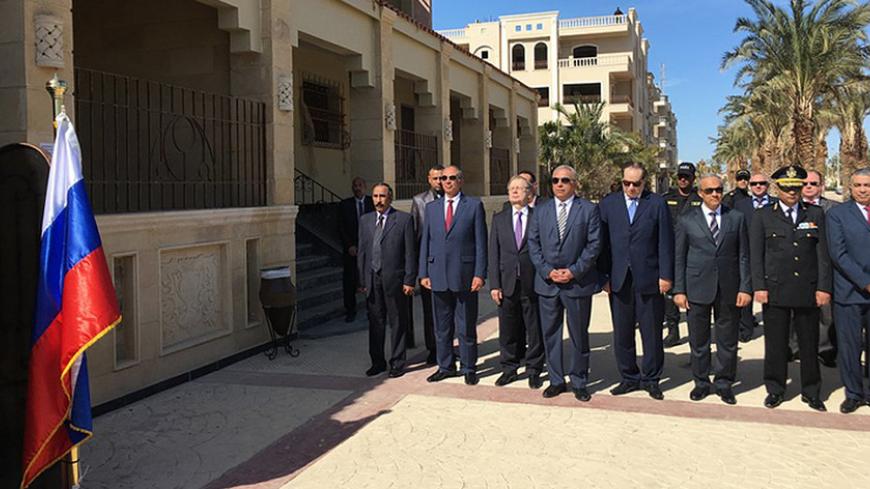 A new Russian Consulate opened in the Red Sea resort town of Hurghada with the aim of reinvigorating Egyptian tourism. Tourism declined when Russian flights were suspended after a Russian plane crashed over the Sinai Peninsula in October 2015.

Experts say that the opening of the new consulate may facilitate the return of Russian tourism to Egypt after more than a year hiatus, which has put much pressure on the country’s tourism industry.

“The opening of the consulate is a positive step toward the recovery of a tourist industry that has been hit hard by the deadly crash of a Russian plane in Sinai in October 2015 and the suspension of all Russian flights to Egyptian airports,” Hossam Akawy, a tourism expert and a member of the Tourism Investors Association in the Red Sea, told Al-Monitor.

Akawy said that Hurghada has long been a popular tourist destination for Russians. Establishing a consulate there will help serve the large number of Russian civilians who reside in Hurghada, and it will also draw in many Russian tourists.

In November 2015, the Russian government announced its decision to open the new consulate, which is the third in Egypt, joining two others located in Cairo and Alexandria. The consulate was partially functional, but now it is fully operational.

The consulate will provide consular services for more than 20,000 Russian civilians who live permanently in Hurghada. A statement released by Russian Foreign Ministry spokeswoman Maria Zakharova on Jan. 19 said that the consulate has already been offering consultations to Russians on citizenship matters, notary certification, legislation and other issues.

“I am very optimistic about the return of Russian tourism within a month, as all tourist facilities are ready to serve our tourists,” Russian Ambassador in Cairo Sergey Kirpichenko said at the opening ceremony of the consulate.

The statement came after Russian security delegations carried out a five-day inspection tour at Hurghada airport.

“For us, this is a very important event, as about 20,000 Russian civilians live in Hurghada and we hope to offer to them consular, legal support and protection of their interests,” Russia’s Consul General Dzhamshed Boltayev said.

Tourism expert Adel Salah Nagi said that the Egyptian tourism industry will not get back on its feet with the opening of a new consulate. “It is not about the opening of any consulate. It is more about introducing reforms to the country’s tourism industry by offering incentive tourism programs, intensifying promotional campaigns of the country’s tourist attractions, upgrading tourist sites and beefing up security measures,” Nagi told Al-Monitor.

Nagi said that the Egyptian government should also take into more consideration other markets like the Far East, Africa and the Arab world. “The country should have more tourists from those areas. Egypt’s tourism sector should not be dominated by one market,” he added.

Egyptian officials have paid several visits to Russia in an attempt to highlight the safety of Egyptian airports and discuss the return of flights. The suspension has had a devastating effect on Egypt’s struggling tourism sector.

According to data released by the Ministry of Tourism, Egypt incurred monthly losses of 3.2 billion Egyptian pounds ($173 million) directly and indirectly after the downing of the Russian plane. Following the deadly incident, several foreign countries, including Russia, the United Kingdom and Germany, have imposed travel bans on flights to the Red Sea resort town of Sharm el-Sheikh.

Tourism has long been a main source of the national income. Before the January 25 Revolution in 2011, tourism employed more than one in 10 of the workforce and generated approximately $12.5 billion in revenue.

Before the revolution, the country received nearly 15 million tourists a year. By 2013, tourism numbers had fallen by one-third to under 10 million a year and has undoubtedly slumped further since then.

However, Minister of Tourism Yehiya Rashed said that the year 2017 will see a massive recovery in the Egyptian tourism sector as foreign airlines from the major markets, including Russia, the United Kingdom and Germany, are expected to resume flights to Egypt’s tourist attractions soon.

Tourism revenues from those three markets, the minister added, represent more than 40% of the total tourism flow to Egypt in the past seasons.

According to Tourism Ministry data, Egypt attracted about 5.3 million tourists by the end of 2016 despite ongoing challenges.