The Central Bank of Egypt has set up a new fund to revive its ailing tourism industry, and experts are upbeat about the outlook of tourism in 2017. 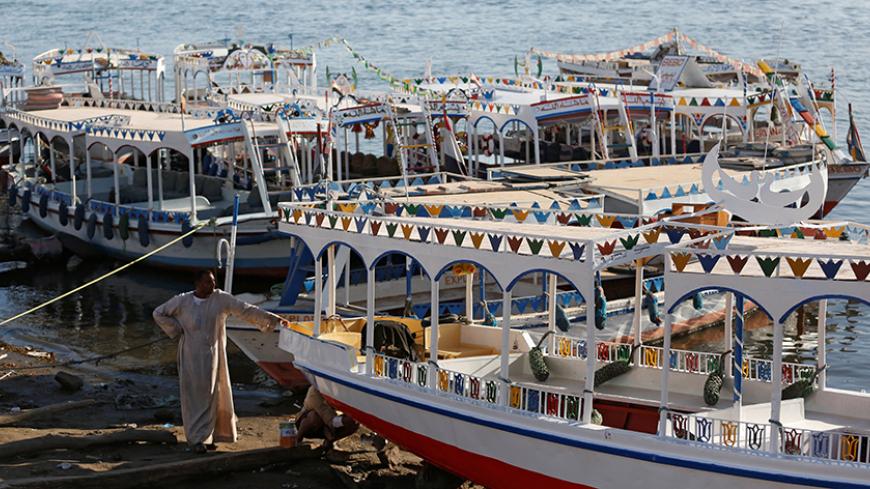 Amin Masoud looks on near his boat as he waits for tourists on the bank of the Nile, in the port city of Luxor, Egypt, Dec. 14, 2016. - REUTERS/Amr Abdallah Dalsh

Egypt has set up a new fund worth 5 billion Egyptian pounds ($267 million) to upgrade hotels, tourist resorts and Nile floating boats across the country as part of efforts to revive its ailing tourism industry.

The new fund, which was announced by the Central Bank of Egypt (CBE) on Dec. 26, would finance maintenance and upgrades at hotels, tourist resorts and other tourism facilities with an interest rate of 10%. The CBE also decided to extend the grace period for tourism investors to pay their debts until 2018.

Funds would also be offered to investors in accordance with a set of rules, including the investor’s level of seriousness and the benefits that will increase tourism flow to the country.

The new measures came after a meeting between Central Bank Governor Tarek Amer and tourism investors in South Sinai during which perils of investment in the tourism sector were discussed. During the meeting, Amer promised to solve the problems Egyptian investors face in the tourism industry in order to give a push to the staggering sector.

According to data released by the Ministry of Tourism, Egypt incurred monthly losses of 3.2 billion Egyptian pounds ($170 million) directly and indirectly after the downing of a Russian plane in the Sinai Peninsula in October 2015. Following the deadly incident, a number of foreign countries, including Russia, the UK and Germany, imposed travel bans on flights to the Red Sea resort town of Sharm el-Sheikh.

Tourism experts say the new fund is an ambitious step to reinvigorate hotels that have not undergone maintenance and upgrades for six years as well as help them serve the expected return of tourism and travel flow to Egypt.

“The new fund would enable hotels and tourist resorts to well receive tourist arrivals, which are forecast to increase in the coming period,” Hossam Akawy, a tourism expert and a member of the Tourism Investors’ Association in the Red Sea, told Al-Monitor.

Akawy said that there are widespread expectations that the tourism industry would be back on its feet this year. “That is why hotels and tourist facilities need to get a face-lift,” he added.

Russian Transport Minister Maxim Sokolov said last week that Russia would likely resume direct flights with Egypt in January, according to Russia’s TASS news agency. Sokolov added that the decision to resume flights will be made after Russian officials revise reports by Russian experts who have assessed Egyptian airport security. Since the Russian plane crash, Egypt has been putting in place tighter security measures at all its airports in order to draw tourists back to the North African country.

In a phone conversation with Egyptian President Abdel Fattah al-Sisi late last month, Russian President Vladimir Putin said that his country intends to resume flights with Cairo in the very near future.

Akawy said that the setting up of the fund came as a lifebuoy for owners of hotels and tourist resorts in the country, as banks had stopped funding the tourism sector due to instability and financing risks.

In March 2016, the Egyptian Ministry of Tourism announced it would not allow the establishment of more tourism companies for a year due to declining tourism flow.

Adel Salah Nagi, another tourism expert, said that the new fund is a positive move. However, he added that it should have included support to other aspects of the whole tourism system, including marketing and tour operators. “Tourism is not only about hotels. There are other areas that also need to be upgraded and developed, especially marketing and tour operators,” he told Al-Monitor.

Nagi said that the government also has to further facilitate travel measures for tourists and launch direct flights with countries that Egypt is not directly connected with. He called upon the authorities to cancel the entry visa fees. On-arrival visa fees are estimated at $25.

Tourism has long been a main contributor to the national income. Before the January 25 Revolution in 2011, one in 10 people in the workforce worked in the tourism sector and it generated approximately $12.5 billion in revenue.

At its peak, Egypt boasted nearly 15 million tourists a year. By 2013, tourism numbers had fallen by one-third to under 10 million a year and have undoubtedly slumped further since as the 2015 downing of the Russian jet that had taken off from Sharm el-Sheikh prompted foreign holidaymakers to book their vacations elsewhere.

However, experts are upbeat about the outlook of Egypt’s tourism industry in 2017. According to data released by the Central Agency for Public Mobilization and Statistics, tourist arrivals jumped by 7% in October 2016 compared with a month earlier.

Minister of Tourism Yehia Rashed said that 2017 would see a massive recovery in the Egyptian tourism sector as foreign airlines from the major markets, including Russia, the UK and Germany, are expected to resume flights to Egypt’s tourist attractions.

Tourism revenues from those three markets, the minister added, represented more than 40% of the total tourism flow to Egypt in recent seasons.

According to the Tourism Ministry data, Egypt attracted about 5.3 million tourists by the end of 2016 despite ongoing challenges.