Can 'uber for horses' stir up tourism in ancient Egyptian city?

In an attempt to revive the ailing tourism industry, Egypt's government is trying out-of-the-box ideas, such as a ride-hailing app for horse carriages. 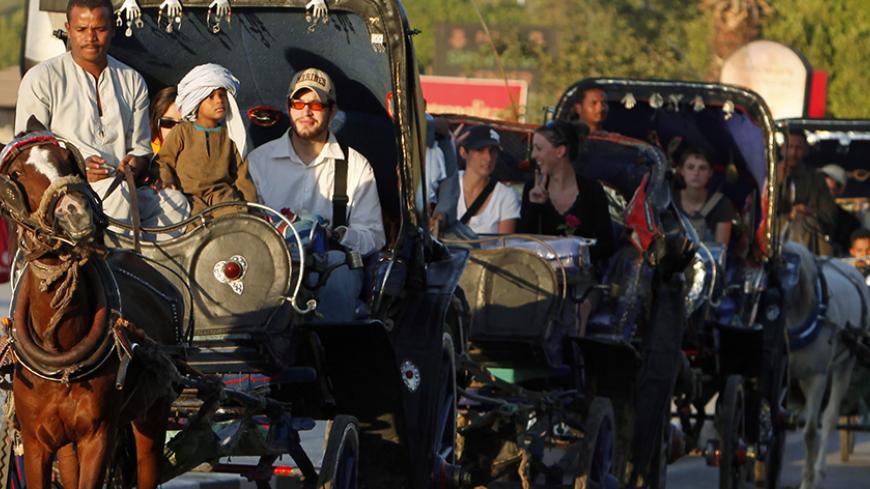 Tourists ride on horse carts in the southern city of Luxor, Egypt, Dec. 2, 2010.

Egypt will soon launch an Uber-like e-hailing mobile application for horse carriages (hantoor) in the country’s tourist city of Luxor and then extend it to other tourist areas as part of efforts to reinvigorate the country's ailing tourism industry.

Through the app, tourists and local customers will be able to order any horse carriage in the city, know the prices, see the portfolio of the carriage’s driver and even rate his performance and that of the whole trip.

Luxor Gov. Mohamed Badr announced the launching of the app last week during his meeting with the city’s horse carriage drivers.

During the meeting, Badr said that the hantoor drivers will also be given a unified uniform while receiving customers’ requests through the Uber-like mobile app. The governorate is also working on providing manure-catching bags for horses in order to keep the city’s streets clean, Badr added.

Used as transportation in the days of the Pharaohs, hantoors are still making their way down modern-day streets in Egypt despite rampant technology and hard tourism times. It is not just Egyptians who enjoy a carriage ride. For tourists, a hantoor ride is a fascinating way to see Egypt’s sights.

In the country’s tourist cities, hantoor drivers can be seen amid the heavy traffic as they transport commuters from one part of the city to another or take visitors on a tour of the capital’s famous landmarks. But with the political upheaval in the country and declining tourism, the trade of hantoor has been struggling. Many hantoor drivers have abandoned the profession.

Many believe that the new hantoor e-hailing application will be a good attraction for tourists and a boom for the hantoor business. They say that ordering hantoors using technology would be much easier and would give users more confidence in the service.

Eman Mohamed, a tour guide, said that the application is an out-of-the-box idea that goes in line with present technology. However, she added that before launching the new application, hantoor drivers should first be given training sessions on how to deal with the application as well as with tourists themselves.

The training sessions, Mohamed said, should also give tips on how to preserve the cleanness of the city’s streets and abide by the traffic rules. “The government should also issue certificates for the drivers after they successfully pass these courses. Then, the certificates can be a prerequisite for renewing the hantoor license,” Mohamed told Al-Monitor.

Badr said that a website dedicated to hantoor trips and drivers will also be launched in order to allow tourists and locals to give their insights into the offered hantoor trips. According to the governor, unlicensed horse carriages will be prevented from operating in tourist areas.

Am Ramadan, an owner of a horse carriage in Luxor, told Al-Monitor that unlicensed horse carriages represent a real disturbance for them and distorts the image of the tourist city.

“There are currently over 650 horse carriages roaming Luxor’s streets, out of which only 340 are licensed. They are negatively affecting the flow of traffic and overshadowing the beauty of the ancient city which has within its boundaries [many] of the world’s monuments,” Am Ramadan said.

Ramadan added that the government also has to offer assistance for the horses themselves and offer high-quality grains for them in order to ensure that they get proper nutrition. “The grains that are offered are of a very low quality and they cause the horses several diseases,” Ramadan said.

Tourism has long been a main source of the national income. Before the January 25 Revolution in 2011, tourism employed more than 10% of the workforce and generated approximately $12.5 billion in revenue.

Before the revolution, the country received nearly 15 million tourists a year. However, the downing of a Russian jet that took off from the Red Sea resort town of Sharm el-Sheikh in October 2015 has prompted foreign holidaymakers to book their vacation elsewhere.

According to data released by the Ministry of Tourism, Egypt incurred monthly losses of 3.2 billion Egyptian pounds ($198 million) directly and indirectly after the bombing of the Russian plane in the Sinai Peninsula. Following the deadly incident, several foreign countries, including Russia, the UK and Germany, imposed travel bans on flights to Sharm el-Sheikh.

However, experts are upbeat about the outlook of Egypt’s tourism industry in 2017. According to Tourism Ministry data, Egypt attracted about 5.3 million tourists by the end of 2016 despite ongoing challenges.