Why Netanyahu doesn't need the Zionist Camp yet

Israeli Prime Minister Benjamin Netanyahu would like to add the Zionist Camp to his coalition, but not at the price of freezing settlement construction or pushing the HaBayit HaYehudi Party out of the government. 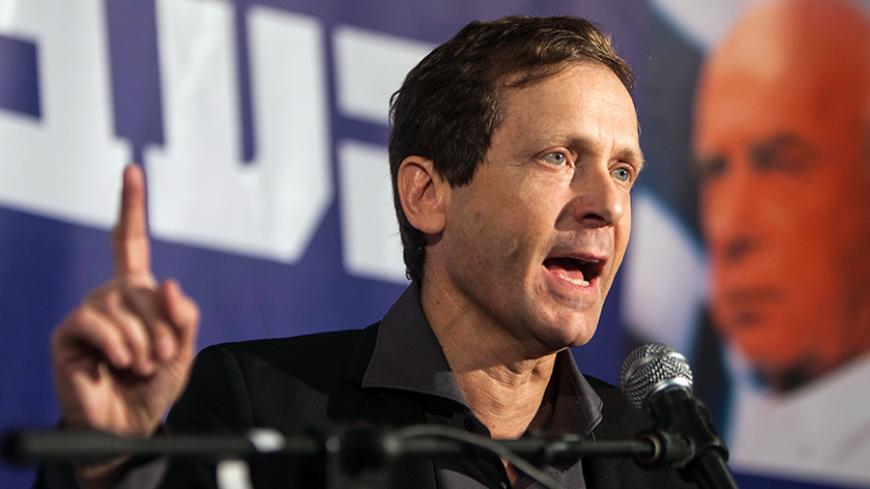 For over a year, Zionist Camp leader and Knesset member Isaac (Buji) Herzog has denied the existence of intensive negotiations he held with Prime Minister Benjamin Netanyahu regarding joining Netanyahu’s narrow right-wing government (61 coalition members out of 120 Knesset seats). While Al-Monitor reported on the existence of these contacts, Herzog continued to insist that nothing of the kind had taken place. Now it emerges that, indeed, negotiations had been held over a long period, involving various mediators, detailed proposals, joint memorandums of understanding and long-term plans.

One of the first facilitators of these negotiations was acclaimed American-Israeli Hollywood producer Arnon Milchan, who enjoys access to all the leaders of the Israeli political parties and often mediates between them. Subsequently, various political sources entered the picture, including Finance Minister Moshe Kahlon, who never hid his hopes for widening of the government from the day it was founded.

In recent weeks, these negotiations ratcheted up and came to fruition. Netanyahu offered Herzog the Foreign Ministry and another seven to eight portfolios to his party, including the Ministry of Economy and Industry. According to Netanyahu’s proposal, 16 of the 24 Zionist Camp members of the Knesset would receive some kind of position if the party agreed to join the coalition.

According to a senior political source who spoke on condition of anonymity, Herzog wants “something extra.” He desires some kind of diplomatic payoff — a diplomatic achievement that would allow him to say that he wields influence over governmental policy. In his own words, the source said, Herzog wanted "a hand on the steering wheel.” So far, however, Netanyahu has not agreed to allow Herzog any kind of access to the “steering wheel.” Netanyahu does not want a construction freeze in the West Bank, opposes the expulsion of HaBayit HaYehudi (eight seats) from the government and will not give Herzog veto power over legislative or settlement issues. At the last minute, Netanyahu attempted to sweeten the pot by whipping out the defense portfolio for Herzog (this, too, was publicized at the time). The prime minister’s Defense Ministry offer to Herzog would come into effect two years from the founding of the present government in May 2015 — in other words, less than a year from now. This would, perhaps, allow Herzog to succeed in rehabilitating his image and gain a security aura.

As of the writing of this article, Herzog’s chances of achieving a majority in his party — the Zionist Camp is composed of the Labor Party and Hatnua — for such a process are slim to zero. His Zionist Camp leadership partner Hatnua head Tzipi Livni, who has been at a loss since the March 2015 elections, vehemently opposes such a move. Most of the party's other Knesset members also oppose such a deal. Former Labor Party chair Shelly Yachimovich, the party’s key power broker, is hesitant. She, personally, would be happy to receive an operational position in the government to “mature” for another round of leadership. However, she is well aware of the public price to be paid for such a move.

In this state of affairs, Herzog is likely to find himself losing his political shirt in this escapade: The last vestige of his prestige may shatter in light of his attempts to crawl into Netanyahu’s government, efforts that ultimately will not come to fruition. In the end, he may be left hemorrhaging politically. Although it is expected that the police investigative file against Herzog will soon be closed, this is not expected to help him take off politically. Herzog is falling in the polls to the benefit of Yair Lapid's Yesh Atid Party; surveys say Yesh Atid would win more than 20 seats if an election were held today. By contrast, Herzog seems to be at the end of his political rope. The Labor Party offers no one a second chance, and it seems that Herzog’s first chance in March 2015 will be his last.

Why does Netanyahu need Herzog precisely at this point in time, when the finance minister has agreed to pass a biennial budget that will ensure the government’s survival over the next two years (2017-18)? Netanyahu, as reported by Al-Monitor on May 4, is concerned about what awaits him in the three months from November until January, the period between the new US president being elected and sworn in, when lame-duck President Barack Obama may act independently and adopt a diplomatic path that could inflict damage on Netanyahu. Additional issues that worry the prime minister include who will be the next US president, the tightening European besiegement on Israel and the continued rampage of the radical right in his government.

The inclusion of Herzog now would constitute the ultimate classic fig leaf for Netanyahu. It would give him wiggle room for the political maneuverability that he likes so much, for another year or two. But since this need is not an existential one yet, Netanyahu is not willing to get rid of HaBayit HaYehudi or pay Herzog in hard diplomatic currency. It is possible that Israel’s diplomatic and international position may continue to deteriorate in the coming months, to the extent of forcing Netanyahu to change his priorities. But at the moment he is not there yet, and therefore Herzog is not at that stage either.

Sources close to Netanyahu said this week that they would agree to accept or admit even part of the Zionist Camp to the government. This is an allusion to the option of dismantling the Zionist Camp platform into two rival parties: one that wants to join the government and one that opposes such a step. Netanyahu tried a similar scheme in his term of office that began in 2009, when he tried to dismantle Livni’s Kadima Party, but without success. This time, it also looks like a plot that is doomed to failure. The Zionist Camp is in dire straits and its position in the polls drops consistently. Thus, any attempts to dismantle the party to allow some of its leaders to enjoy the pleasures of governance may well be the last nail that seals the party’s political coffin.

Outside the Zionist Camp, Netanyahu’s opponents continue to organize and gear themselves toward the next elections, due to be held in a little over two years.

After Herzog missed his opportunity, the next turn will be given to Lapid who is, as aforesaid, gaining traction in the polls. Recently, Lapid has taken a turn to the right; he has succeeded in attracting those disappointed with Netanyahu, as well as those frustrated with the political center and left. Next to him, another group is forming with Kahlon, who is in close contact with former Education Minister Gideon Saar. The two are planning on running together as part of a new party and getting a general to fill the security slot. Such a party could, according to the polls, scrape off quite a few mandates from the Likud and bring an end to Netanyahu’s rule. This is a goal and a dream that is shared by almost all the senior members of Israel’s political system. Meanwhile, no end to the Netanyahu era is visible on the horizon; it remains only a hope and a prayer.