Zionist Camp leader Isaac Herzog keeps denying reports by which he is negotiating with Prime Minister Benjamin Netanyahu the possibility of joining the government. 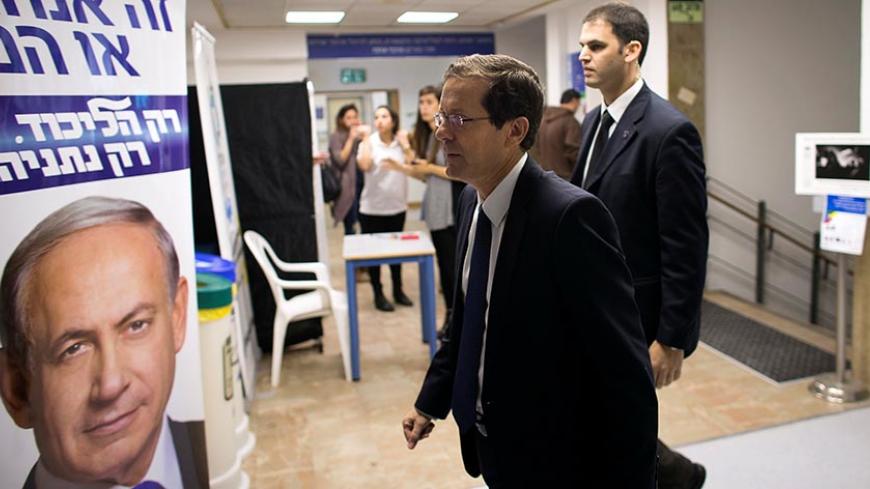 A fresh wave of news reports on a “warming up” of negotiations between Prime Minister Benjamin Netanyahu and Zionist Camp leader Isaac Herzog on forming a broad government greeted Israelis Oct. 4, after the end of the Jewish New Year holiday. It is the umpteenth round of talk on the subject — including in Al-Monitor — but the lead actors show no sign of tiring. Netanyahu and Herzog deny the new reports, but no one in the Israeli political and media establishments takes them too seriously.

The current leaks on contacts — which were upgraded last week during the course of the funeral for Shimon Peres, the ninth president of Israel — were initiated by Likud ministers opposed to the move, which would entail political steps in its wake. Their goal: to thwart the move and embarrass the two partners, who would be forced to deny the leaks and would also face intense public and media criticism as a result.

On the day of Peres' funeral, Herzog met numerous diplomats and leaders who urged him to take action and join Netanyahu’s government in order to push Netanyahu into breaking the impasse in the peace process. Herzog, who during the last two years has been disappointed and forced to eat crow too many times because of Netanyahu’s broken promises, kept things purposely vague.

Herzog knows that only a truly sincere diplomatic process — anchored in writing and in public statements by Netanyahu — would allow him to bring the Zionist Camp into the government. The problem is that Netanyahu is too afraid of such a process to allow it to happen. Netanyahu is game for clandestine agreements, secret appendices and all the other tactical tools that he has adopted to exhaust and evade all those with whom he comes into contact — the Palestinians, the Americans, the Europeans and his coalition partners.

Netanyahu, who went the distance in negotiations with US Secretary of State John Kerry in 2014, never leaves behind footprints, signed documents or explicit understandings. Instead, he builds separation walls and buffer zones between himself and whatever he himself has agreed to. It is always an “American document” or a “theoretical brainstorm” or an “academic encounter,” according to diplomatic sources who spoke on condition of anonymity. It is never Netanyahu. Thus he maintains plausible denial and manages to survive with a right-wing coalition and religious Zionist voters. Herzog has sworn to himself that he won’t make the same mistake again. If Netanyahu wants him, he will have to pay in a hard political currency.

Knesset member (MK) Erel Margalit, one of Herzog’s harsh opponents in the Labor Party, the main faction in the Zionist Camp, tweeted Oct. 4, “The prime minister’s attempt to dismantle the Labor Party will not succeed. I will concentrate all the forces that have not given up, in order to bring about Netanyahu’s replacement, not God forbid to join him.” Voices in the Zionist Camp are talking increasingly about a possible splitting of the party should Herzog decide to join Netanyahu’s coalition at the end of the day.

Margalit is part of a Labor bloc that includes former party chairs Shelly Yachimovich and Amir Peretz and many younger MKs who will try to torpedo Herzog’s efforts to join the coalition. These efforts are perceived as pathetic, even ludicrous. The open question is which side will succeed in retaining the majority of the party’s MKs and thus retain the Labor Party label? This moniker is still viewed as a platform for eight to 10 sure-fire mandates.

Herzog is convinced that the party will not split. He will only join Netanyahu’s government if it adopts a significant political process. He will not settle for a declaration by Netanyahu about a commitment to the two-state solution. Herzog wants a document signed by the prime minister involving a construction freeze in the territories, outside the settlement blocs; confidence-building measures toward the Palestinians; and an international convention for peace and negotiations with the Palestinians according to agreed-upon parameters. Netanyahu is not yet in a position to fulfill these demands.

The ideal scenario from Netanyahu’s point of view would be a Labor split into two parts and the subsequent entree of eight to 10 Labor MKs, headed by Herzog, into the government. On the one hand, a group this size would not be strong enough to force Netanyahu into real diplomatic concessions, but on the other hand, it would be strong enough to defuse any designs by Education Minister Naftali Bennett and Finance Minister Moshe Kahlon (together or separately) to threaten him.

A coalition of 75 or 76 MKs would make Netanyahu more immune and less prone to political blackmail by any one component of the government. In addition, Netanyahu would benefit from the bulletproof, diplomatic shield provided by having Herzog in the Foreign Ministry. This would allow the prime minister to moderate any vengeful diplomatic schemes concocted by President Barack Obama during his lame-duck period, after the US elections and prior to his departure from the White House.

One way or the other, leaks continue regarding the interminable negotiations being held between the Zionist Camp and Netanyahu. These serve to harm the public image of the opposition’s largest party, with 24 MKs, and cause the Zionist Camp to deteriorate in the polls. For example, a Ma’ariv survey taken Oct. 2, the eve of the Jewish New Year, gave the party only 10 mandates. Thus, talk of a possible historic split in the Labor Party no longer sounds so far-fetched.

There is a dominant group of Labor MKs who think the party has to move to the political center and return to a more “securitist” policy, with a slight Rabin-like, right-wing adjustment. They feel that the party has annexed too many elements identified with the left-wing Meretz, thus causing it electoral bankruptcy.

Personalities such as Tel Aviv Mayor Ron Huldai, who is considering running for Labor head, is starting to muse about the not-so-impossible scenario of Labor’s disappearance in the coming elections. It could be, some say, that Labor has completed its historical mission. While Herzog agonizes over whether to join Netanyahu’s government or remain in the opposition, the Labor Party — the party that founded the State of Israel in 1948 and ruled it incontestably for the next 29 years — is evaporating into thin air.

Labor desperately needs new leadership, young blood and an invigorated agenda to differentiate itself from Yair Lapid’s Yesh Atid, which is leading in the polls. As things now stand, the chances of this happening are not good at all.