With the numerous challenges facing the new Netanyahu government, and with a slender majority, many are predicting his coalition won't last long. 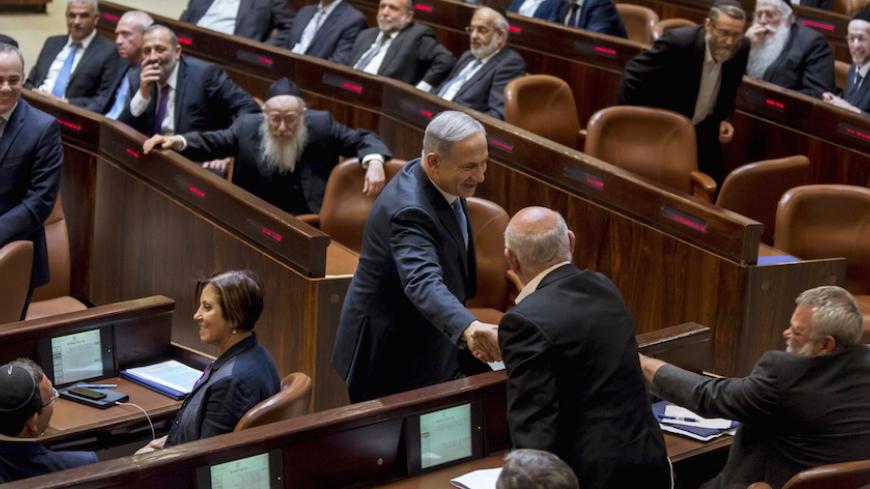 Israeli Prime Minister Benjamin Netanyahu shakes hands with members of the opposition after his swearing-in as prime minister for the fourth time, to lead the 34th Israeli government, at the Knesset, Jerusalem, May 14, 2015. - REUTERS/Jim Hollander

Israel’s Knesset convened May 18 for its first official meeting since the presentation and swearing-in of Prime Minister Benjamin Netanyahu’s new government. The new ministers have begun getting accustomed to the new, difficult political reality forced on them. Since Netanyahu’s fourth government is based on a very slim majority — 61 supporters in the coalition versus 59 in the opposition — ministers and Knesset members (MKs) in the coalition will have to remain firmly grounded, ready to vote at any given moment in the Knesset plenum.

Until today, an “offset,” or quid pro quo, system had been customary in the Israeli parliament. This meant that coalition MKs could go on trips abroad and otherwise be absent from the plenum as much as they wanted as long as they could produce the name of a corresponding MK in the opposition who agreed to “offset” him or her — in other words, be absent from the same meetings and votes. As of now, the offset method has been revoked, and all leaves have been canceled. Everyone, and that means everyone, is confined to the plenum in a brittle, rare and terrifying balancing act.

MK Eitan Cabel, chairman of the Zionist Camp faction, which has 24 MKs, said on opening day that he has no intention of founding a “humanitarian exceptions committee” to give passes to unfortunate MKs who need to travel abroad.

“They are in the coalition,” said Cabel, “and they need to win every vote. We in the opposition only need one vote to topple the government, and we’ll do it.”

Is it really so simple?

The burning question of the day is what is the anticipated life span of Netanyahu’s government, balanced on a hair's breadth? Indeed, the government is already threatened by former popular minister and senior Likud Party member Gilad Erdan choosing to remain outside the festivities and the government, practically a one-man opposition against the prime minister.

Well, different people have different answers to the life-span question.

Newbie opposition member and former Foreign Minister Avigdor Liberman was quoted by associates as saying in closed talks May 18 that the government will fall faster than we think, “within months, maximum a year.” An additional, fascinating question is: How long will it take for Liberman to get tired of the frustrating life in the opposition after being accustomed to a cushy, extended tenure in the Foreign Ministry? Meantime, Liberman swears he's enjoying every minute of it, but the strong impulses that led him to take revenge on Netanyahu and topple him still exist and in full force. Liberman has no intention of giving up. He represents an alternative to Netanyahu on the right and is waiting in a dark corner for the right moment. The only problem is that the corner is shadowy, shabby and boring.

Netanyahu will try his utmost to enlarge the government. The problem is that at this point, he has no options. Zionist Camp leader Isaac Herzog, with whom he had been in indirect contact in recent weeks, slammed the door in his face with a belligerent opposition speech during the swearing-in ceremony of the new government. Yesh Atid leader Yair Lapid is not interested because it would be political suicide for him to join Netanyahu’s government. In any case, the ultra-Orthodox parties would veto Lapid. Liberman? The hatred between the two men broke new records.

Given this state of affairs, Netanyahu will try to “fish” for isolated Knesset members in various parties to raise the quota of coalition MKs even by another two or three members. Here, too, however, there is no good news. Only one MK, former journalist Sharon Gal, who joined Liberman and serves in the Knesset under him, is viewed as a “possible target” for courting by Netanyahu. It's doubtful that Gal will make the move, and even if he does, it's doubtful that it will be sufficient.

Still, under the current system it's hard to bring down a government. The main obstacle faced by Netanyahu is the budget, which must pass before the end of the year. If he fails to pass a budget, with his razor-thin majority his government will fall. Another possibility is a no-confidence vote, but now, in contrast to the past, the opposition needs 61 hands to topple the government, plus it has to present an alternative government as well. This is no easy task. Thus, Netanyahu’s real existential threat is his finance minister, Moshe Kahlon.

In the course of the coalition negotiations, Kahlon made it clear that he would not join a 61-member coalition, because it will be difficult for him to pass the reforms he plans. Reality slapped Netanyahu in the face, however, and the only coalition he was able to assemble was the narrow coalition that Kahlon feared. Thus, the way for the opposition to undermine Netanyahu’s government is to try and make Kahlon’s life miserable, torpedoing his reforms in the hope that he’ll get sick and tired of it and dissolve the government on his own. This is the scenario that worries Netanyahu as well.

Meanwhile, the new government is breaking all previous records in contradictions and fallacies suffered by its predecessors. The best example is Silvan Shalom, who also almost remained outside the government, joining at the last minute. Shalom received the Interior Ministry portfolio — minus the planning and construction jurisdictions, which were given to the finance minister — and the empty title of “vice prime minister.”

Recently, it was publicized that Netanyahu had appointed Shalom to be “responsible for conducting negotiations with the Palestinians” and for “dialogue and strategic relations with the United States.” We must remember that the current government has no active foreign minister, because that portfolio remains in Netanyahu’s hands. Shalom, like many other Likud higher-ups, has expressed many times over the course of the past year that he is against a Palestinian state and the two-state solution. So, what kind of negotiations can he hold with the Palestinians? What exactly will he negotiate?

Netanyahu announced on Jerusalem Day, May 17, that Israel’s capital will never be the capital of any other nation or state, slamming the door on all attempts to renew negotiations. After only 24 hours, the Jerusalem Post quoted Netanyahu’s associates as saying that he aims to “renew the talks with the Palestinians.” This leak was meant to serve as a welcoming greeting for Federica Mogherini, EU high representative for foreign affairs and security policy, who is due to arrive in Israel May 19 for meetings with Netanyahu and other high-level officials. It is clear to everyone involved that Netanyahu and Israel cannot continue to juggle so many balls in the air for much longer.

During his ultra-right-wing election campaign, the prime minister announced that a Palestinian state would not happen. Afterward he moderated his tone and began to talk again about negotiations, although his coalition makeup does not lend itself to any kind of flexibility and negates the basic assumption of any future peace agreement. How does one untangle this mess? Netanyahu hopes to go with the flow of events, to buy time and survive until the expiration of the serving American president's term.

And speaking of Barack Obama, let us also mention that he is responsible for Netanyahu’s most important moment this week. Contrary to previous assessments, the president said that the chances for achieving peace between Israel and the Palestinians are very slim at the moment, mainly because of the composition of Israel’s coalition. In Jerusalem, they breathed a sigh of relief, but also raised a worried eyebrow. What was behind Obama's announcement?

At the beginning of his second term, Obama had staked his political capital on the goal of achieving peace between Israel and the Palestinians. Will Obama now give the European Union the green light to start a campaign of boycotts and ostracism of Israel, including passing a resolution in the UN Security Council on outlines for an agreement with the Palestinians, thus gradually transforming Israel into a pariah state? Jerusalem has been receiving scraps of information indicating that this is, indeed, the direction in which things are headed.

“We’ll cross that bridge when we come to it,” Netanyahu’s people say.

At the moment, they are battling enough fires on the domestic front. They’ll deal with the global front later.