In an interview with Al-Monitor, Knesset speaker Yuli (Yoel) Edelstein argues that the new coalition is too fragile to survive, and calls on Prime Minister Benjamin Netanyahu to form a unity government with the Zionist Camp. 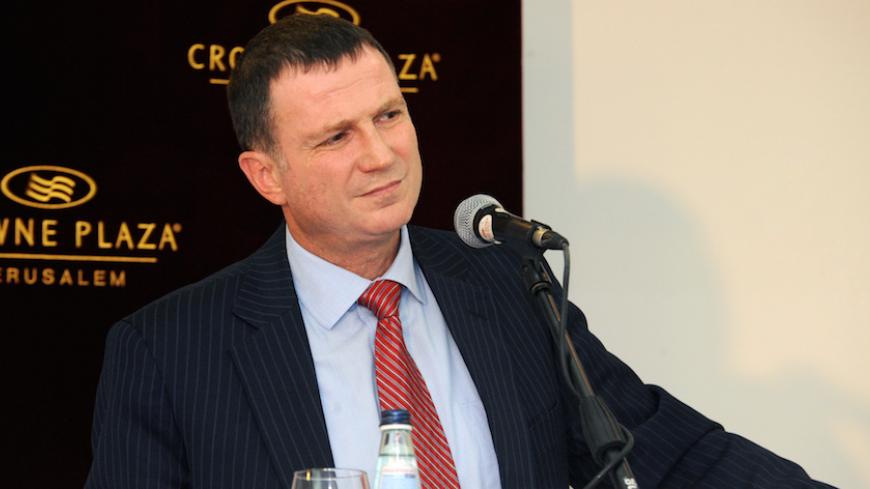 Knesset Speaker Yuli (Yoel) Edelstein has a hard time seeing how Prime Minister Benjamin Netanyahu’s narrow, fourth government will manage to survive for more than a year unless it is expanded. On May 18, less than a week after the farce that was the swearing-in of Israel’s new, 34th government, after 9 p.m. in a tense and decidedly unfestive event, Edelstein told Al-Monitor that the 61-member coalition was unhealthy and that it could not last long. He believes that a unity government would be good for both the coalition and the opposition. In contrast, a new round of elections so close to the last one, on March 17, would be terrible for both sides and could result in a severe crisis of trust between the Knesset and the public.

Edelstein is one of the most senior members of the Likud Party. He came in second after Knesset member and former Minister Gilad Erdan in the primaries to determine the makeup of the Likud Knesset list, and asked the prime minister that he be allowed to continue in his position as speaker of the Knesset after the elections. In retrospect, this spared him the anguish, tension and disappointment faced by other top party members who expected to receive positions in the new government.

Al-Monitor:  On the night that the ministers were sworn in [May 14], you said from the Knesset podium that the predominant feeling of the average citizen is that something isn’t working quite right here, that the efficiency of the current system of government is inadequate and that it is not worthy. What does that say about what lies ahead for this government?

Edelstein:  There is an obvious paradox when it comes to this coalition. During its initial stage, and I don’t know how to define that period exactly — one month, two months, until the end of the summer session — it will be a very strong coalition, because no one has the privilege to say, “I’m against something, and it’s a matter of principle. You’ll have to make do without me” [thus perhaps toppling the government]. During this stage, every Knesset member, including every backbencher, knows that he has the exact same responsibility as the prime minister. This means that the coalition will be strong at first and not lose any votes on the Knesset floor. Everything will be fine and dandy.

Over time, however, it becomes more problematic. Problems will begin once [Knesset members] start gaining confidence, while at the same time become disappointed about something or other. We are already seeing how the opposition has started to home in on certain Knesset members from the coalition. Even at this early stage, they have started to apply pressure on them. While the Ethiopian community was demonstrating, some members of the opposition were approaching Knesset member Avraham Negusie of the Likud, saying, “Avraham Negusie, you know that you now have a chance to save your community. Say that you will not support the government unless 2 billion shekels are allocated immediately to meet your community’s needs.” This time it will be Negusie. Next time it will be someone from the camp of Kahlon, and then after that it will be the ultra-Orthodox. They will always home in on someone or something.

Al-Monitor:  In other words, things can’t last the way they are for very long.

Edelstein:  I think it would be impossible. Netanyahu will have to decide what to do, and that leaves him with two options. The first option is the Zionist Camp [joining the coalition], but they have distanced themselves from the government over the past few days and will likely distance themselves even further. They have climbed up the ladder and started to develop their own language as the opposition. We saw that with [Zionist Camp leader] Isaac Herzog. The Zionist Camp may even start to see cracks in the coalition, and then say, “What are we? A lifesaver to keep them afloat?”

The second option is that [former Foreign Minister Avigdor] Liberman returns and joins the coalition at some point, for instance, once a budget is passed. On the other hand, without the Zionist Camp or Liberman, I have a hard time imagining this government lasting for very long.

Al-Monitor:  From your position as speaker of the Knesset, everything seems relatively calm, compared with how volatile the situation really is.

Edelstein:  That’s true, but not for the right reasons. I had plans to advance parliamentary reforms that would have improved the way the Knesset works with the government, while at the same time increasing supervision. This would have included changes to the Knesset plenum in an attempt to ensure that more Knesset members actually attend sessions. All of that has been put on hold. After all, who will even talk to me about any of that now? It’s all a matter of survival, survival, survival. I wanted to invest in developing the Knesset’s foreign relations and information services, but there is no possibility of that happening under these circumstances. Knesset delegations overseas have already been canceled, because there is a lockdown when it comes to trips abroad. No one is receiving permission to travel overseas with the coalition having just a 61-seat majority. I say that Monday, Tuesday and Wednesday are now like major Jewish holidays for me [when in the old days, Jews were traveling to the temple in Jerusalem]. It is impossible to travel abroad. It is an unhealthy situation that cannot last long. That is why I contend that change is so necessary.

Al-Monitor:  Could it be by having new elections?

Edelstein:  It’s hard for me to imagine having new elections four or five months from now, especially after the trauma of the last elections. It’s not worth it for either side. The people always punish the party that forced the country into elections. There were elections, the government fell apart after less than two years, so we had another round of elections and didn’t manage to do anything then either.

I also don’t believe that the opposition wants elections. The public will object if the elections take place early. People won’t show up to vote. No one will understand why we are even having elections. The electorate will simply say, “We did everything you asked us to do. There are now two major parties, so go run the country.”

The results of these elections were decisive. One bloc won. The ruling party received 30 seats, which is one-quarter of the entire Knesset. When placed in the context of other elections over the past few years, that is a very decisive victory. There has been nothing like that ever since [Prime Minister] Ariel Sharon won 38 seats. So what are people saying? “Fine. It’s Netanyahu. He always gets himself into trouble.'' But this is the fourth time he is forming a government. In retrospect I also say that maybe we should have thought about a unity government with the Zionist Camp first, and only then brought other partners into the coalition. But that is all in hindsight. The fact is that it did not happen. Apparently, Netanyahu also made the calculation that he has 30 seats and a natural coalition of 67 seats. Then suddenly it turned out [when Liberman quit the government] that this coalition wasn’t quite so natural after all.

Al-Monitor:  Do you think that Liberman played Netanyahu?

Edelstein:  I don’t know. The fact is that a party with six seats turned everything upside down. We went from a situation in which there was a stable Knesset, a stable government and activity that should have lasted over time, into one that is on shaky ground.

Al-Monitor:  Do you foresee a possibility of changing the system? After all, this time the various acts of political extortion exceeded all reasonable limits, and that includes extortion by the various coalition partners, but also from within the Likud itself. Netanyahu was extorted everywhere he turned.

Edelstein:  We have to work toward that — to change the system. It will only be possible if it is decided to do that together with the Zionist Camp. In general, it is possible to reach a decision together with the Zionist Camp to form a unity government for the purpose of advancing a few reforms. I would consider taking three or four major issues. I say that for now, it doesn’t really matter who the prime minister is. A genuine, long-term peace agreement with the Palestinians won’t happen here and now. So real [coalition] negotiations could succeed if they do not focus on where the border will run in Jerusalem but rather on local opportunities for collaboration, while at the same time advancing reforms.

If I was forming a unity government, I would think about focusing on those directions over which there are no disputes: changing the electoral system, handling the housing crisis and the cost of living, or even creating an emergency plan to deal with the crisis faced by Israeli-Ethiopians. It would focus on a few reforms and last for a limited time, with an established point of exit.

Al-Monitor:  It looks like the prime minister missed the boat when it comes to the Zionist Camp.

Edelstein:  He was also convinced that he had a natural coalition, but it turned out that he didn’t, and we were left with 61 seats. I don’t really think that there are many other options. Otherwise, we’ll just end up having another round of elections. Isaac Herzog can’t form a government either, which means that there really will be chaos here. We must expand the coalition. It’s not that I’m thrilled about the idea, or that I don’t know how to control the Knesset. It’s just the way things are now.