With a narrow coalition of only 61 members, Israeli Prime Minister Benjamin Netanyahu is working to expand it — either with Yisrael Beitenu head Avigdor Liberman or with Zionist Camp leader Isaac Herzog. 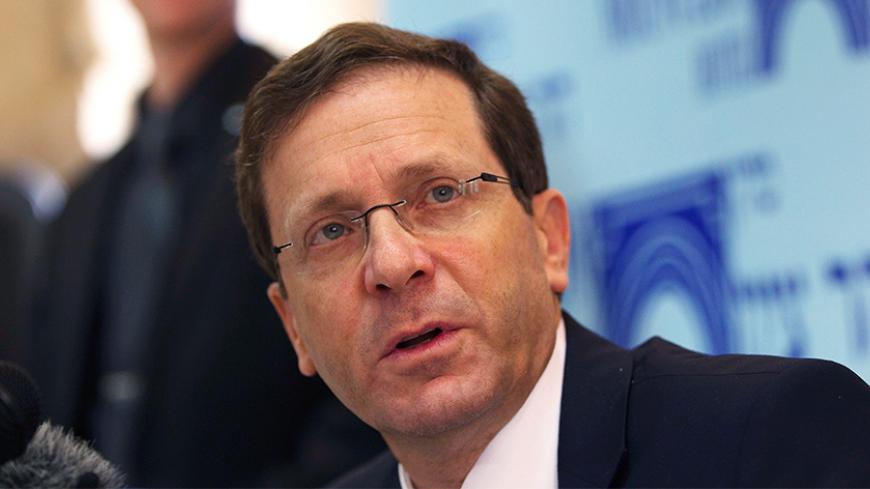 Isaac Herzog, who heads the center-left Zionist Camp, pauses during a briefing with foreign reporters in Jerusalem, Feb. 24, 2015. - REUTERS/Ronen Zvulun

A senior Likud minister provided this explanation to Al-Monitor in answer to the question whether Prime Minister Benjamin Netanyahu was serious, and is still serious, about his plans to bring the Zionist Camp into his coalition. On more than one occasion, that same minister saw how effective coalition negotiations are usually handled when both sides are interested. This time around, he believes the only reason Netanyahu even held discussions with opposition leader Isaac Herzog was for the sake of having those discussions.

At a meeting of Likud ministers May 4, the prime minister confirmed that he had been in discussions about expanding his government with both Yisrael Beitenu Chairman Avigdor Liberman and Zionist Camp Chairman Isaac Herzog. As Netanyahu explained, one wouldn’t (Liberman), and one couldn’t (Herzog). The question remains: What did Netanyahu really want to achieve?

Similarly, one can only wonder whether — given increased reports of feelers being sent out to Herzog (contacts that stopped when he came under criminal investigation) — it is really possible to form a unity government now. The question becomes all the more relevant as it becomes increasingly apparent that the investigation is not gathering enough momentum to include actual criminal charges.

One thing, however, is clear. Ever since Netanyahu established his fourth government in March 2015 with a slim majority of just 61 Knesset members (out of 120 Knesset seats), there have been constant contacts and feelers on various levels, including direct contacts between Netanyahu and Herzog, about bringing the Zionist Camp into the government.

It has not been forgotten that Netanyahu was pushed into a corner and forced to form a narrow government after Liberman surprised everyone by staying out of the coalition. Back then, the assumption among many within the political establishment was that the coalition would eventually be expanded; it was only a matter of time. Everyone was convinced that Herzog was a sure thing, or as senior Labor Party (main partner of Zionist Camp formation) members put it, he would be joining right away. But as time dragged on, it became clear that Netanyahu was not making any serious offers. Herzog remained in the opposition, receiving a steady stream of low-level feelers, which never amounted to any substantial negotiation.

In April, political commentator for Haaretz newspaper Yossi Verter revealed that contacts between Netanyahu and Herzog had already reached an advanced stage, including the exchange of draft agreements via Yossi Kuchik, the former director general of the prime minister’s office. The revelation, which sent shockwaves through the political sphere, also contends that these contacts ceased following reports that Herzog was under criminal investigation. Soon after Verter reported on this, his reports received the backing of Finance Minister Moshe Kahlon. He confirmed that advanced discussions between Netanyahu and Herzog over expanding the government had been underway, but that they were put on hold as soon as the chairman of the opposition came under investigation.

It is also worth noting that Kahlon has been speaking about the urgent need to expand the coalition ever since he first joined it. He even promised to do everything he can to ensure that the coalition is expanded. As everybody knows, there has been no progress since then. On the other hand, Kahlon did reach his own agreement with Netanyahu to support a two-year budget, which would provide greater stability to the government.

The conclusion from all this is that in a situation in which the Herzog investigation fails to take off while Kahlon extends a long-term safety line to the government, talk about a unity government with the Zionist Camp will apparently stay with us for the long term.

What are the chances that anything will come of this? They are in fact very low. It is for the most part a question of what Netanyahu actually needs to survive politically. He would prefer to have Liberman in his coalition, since this would neutralize an effective opposition leader from the right, who has been attacking him so viciously. The problem is that Liberman is out of reach, despite the many efforts that Netanyahu has invested and continues to invest into bringing him into the coalition. As for Herzog, Knesset member Eitan Cabel was right when he told Army Radio on the evening of May 4, “A concrete proposal has never been put on the table for the Zionist Camp to consider. … There is a big difference between negotiations and random chats in the Knesset’s corridors.” Cabel then added, “There have been a number of proposals, which are open for discussion. We spoke about them and consulted among ourselves. We will explain everything in an orderly manner, instead of keeping it hidden beneath the carpet.”

As far as Netanyahu is concerned, leaving the Zionist Camp as an option is a weapon that he can use against HaBayit HaYehudi Chair Naftali Bennett, whom he has already threatened to fire. At the same time, it can also be used against insubordinate Knesset members from the Likud such as Avraham Neguise and Oren Hazan, who are considered unpredictable and are capable of voting against the government.

Given the constraints of his tight coalition, Netanyahu obsesses about how to get a coalition majority on a daily basis. What this means operationally is that he needs breathing room in order for his coalition to function.

So what’s stopping him? If a serious offer was placed on the table, Herzog would know what he had to do in order to bring the Labor Party into the coalition — though the situation with his Zionist Camp partners is not quite as clear. But Herzog does not have a serious offer, nor did he ever have one. As time passes, it becomes quite clear that Netanyahu was simply using his negotiations with Herzog in order to maintain his current coalition. Netanyahu is torn between strengthening his coalition in the short term by adding Herzog, and in the longer term he is at risk of damaging his support among the right-wing electorate, which will think that he joined forces with “the left.” As far as Netanyahu is concerned, such a move could be lethal to him in the next elections; it would inevitably be used by his two rival claimants to the leadership of the right — Bennett and Liberman — in their future campaign.

Herzog is fully aware of this. One of his confidants told Al-Monitor on condition of anonymity, “Feelers were sent out toward the end of the last Knesset session about the possibility of joining the government, just as there had been in the past. The reality is, however, that there is also a lot of spin, a lot of disinformation. It looks like Netanyahu is using the unity government option to manipulate his current coalition partners and intimidate Naftali Bennett.”

Nevertheless, it turns out that Herzog is not rejecting the possibility of joining the coalition out of hand.

According to another associate who spoke to Al-Monitor on condition of anonymity, “Herzog will consider every serious proposal, which would allow for movement on the diplomatic front.” Translated into political language, Herzog is indeed interested. He isn’t happy being in the opposition, and his standing in his own party is floating on choppy waters, forcing him to defend his position from everyone who wants to replace him. What this effectively means is that the option of joining the government is very appealing to Herzog. All it would take is for Netanyahu to make a serious offer. Herzog believes that once that happens, he will be able to bring his party into the government, despite very vocal opposition to the move.