Why opposition leader is pushing coalition negotiations with Netanyahu

Israeli Prime Minister Benjamin Netanyahu hasn’t yet made a concrete proposal for Labor to join his coalition, but controversy over the possibility is already shaking up the party. 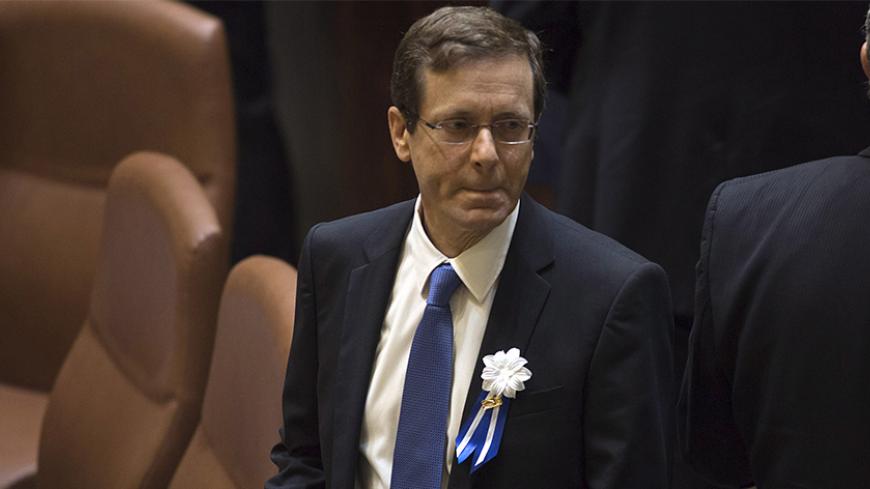 Isaac Herzog, leader of the Zionist Camp, attends the swearing-in ceremony of the 20th Knesset in Jerusalem, March 31, 2015. - REUTERS/Heidi Levine

“If I’m in the Cabinet, I can work together with [Defense Minister] Moshe Ya’alon to strengthen the moderate voices contending with [Education Minister] Naftali Bennett.” According to senior political sources speaking on condition of anonymity, Labor head Isaac Herzog made that statement mid-May in talks he had with party insiders, including Knesset members. He is working to convince them to join the Netanyahu government. Herzog tried to explain that now more than ever, the Labor Party is crucial to the government as only it can stop the far right and potentially change the harsh international attitude toward Israel.

On May 15, Channel 10 News broadcast a recording of a parlor meeting in which Herzog was heard explaining why it's so essential for his party to join the government. Among other things, Herzog said, “I have identified a rare regional diplomatic opportunity that may vanish and not return. I don’t say this based on nothing, but based on knowledge. I don’t know if it will happen. But it could be that it will happen only due to a change in the government’s composition. If it's allowed to talk to [Palestinian President] Mahmoud Abbas, it's allowed to talk to [Prime Minister Benjamin] Netanyahu.”

These comments come in the context of a major uproar in the Labor Party over the past few days over whether the party should join the Netanyahu government. Netanyahu actually called on Yisrael Beitenu Chair Avigdor Liberman to “disengage” from opposition Knesset member Haneen Zoabi and join the government, but Liberman rejected the offer with utter contempt.

Strangely, Netanyahu has yet to make any concrete and viable proposals for bringing Labor into his government. He has sent out feelers over the past few months and put a general proposal dealing mainly with the division of Cabinet posts on the table. On the other hand, Netanyahu has made it clear that he has no plans to change the composition of the government or to get rid of HaBayit HaYehudi just so that the Labor Party can join his coalition. Nor does he plan to leave the diplomatic negotiations to Herzog.

These feelers have grown bolder over the last few weeks, as the Knesset prepares to return from its spring break May 22. Netanyahu wants to expand his problematic narrow coalition and maybe even soften attitudes toward Israel in the diplomatic arena, at least in the United States and Europe.

What makes the story even stranger is that the squabbles within the party and internal attacks against Herzog have not dampened these talks’ progress. Herzog tried at first to explain that there was no cause for concern. Then he realized that his potential rivals for the Labor leadership, Knesset members Erel Margalit and Shelly Yachimovich, are conducting an aggressive campaign against him. They argue that Herzog is leading Labor into an extreme right-wing government at great risk to the party.

On Independence Day, May 12, Herzog finally concluded that he must change tactics. He turned to Facebook and posted his conditions for joining the government. As expected, the post made waves in the party, but there has been no progress in his contacts with Netanyahu to show for it. In fact, the opposite is true.

So what is all the commotion about? It has to do with infighting within the Labor Party and attempts to replace Herzog as its leader. The party chairman is clinging to his position with every bit of strength that he can muster, and has adopted the option of joining the government as a strategic tactic against his rivals. It's worth noting that right after the March 2015 elections, Margalit actually called on Herzog to join the government. At the time, even Yachimovich let it be understood in internal conversations that she did not reject the possibility of joining the government out of hand. Nevertheless, quite a lot has happened since then. With Labor about to hold its primaries, everything is being assessed through that prism. As for Herzog, his greatest ally in this whole move is the chairman of the Histadrut Labor Union, Avi Nissenkorn, who spoke with various Knesset members to convince them of the benefits of joining the government.

Nissenkorn wants to ensure his re-election as Histadrut head in May 2017. He wants to prevent Labor from holding its primaries before then, so the losers won't be tempted to compete against him. Also siding with Herzog is Knesset member Eitan Cabel, who has told associates he believes that if there is an appropriate proposal, Herzog could approve a plan to join the government at the Labor Party conference.

Interestingly, Herzog is now coming out of the political closet by reversing his consistent denials of talks to bring the party into the government. He’s now explaining that it is the right thing to do. On the other hand, when faced with the harsh personal attacks against him and the ridicule and derision he endures, being portrayed as begging to join a right-wing government, everyone seems to be ignoring the logic of such a move. After all, it could give Labor a chance to stop the coalition’s descent into extremism at a time when the party is failing to make its voice heard from the opposition benches. The one person flourishing in the opposition is Yesh Atid head Yair Lapid.

After every election, Labor returns to the same frustrating point. It has never succeeded in emerging as a viable alternative to the government. It failed to do so under Ehud Barak in 2009, and again under Shelly Yachimovich in 2013, just as it failed with the Zionist Camp’s 24 seats in the most recent elections. Herzog is well aware of this, and is now fighting for his political life. He seems to have concluded that the opposition will continue to bury him, while he could become foreign minister in an instant. He would not only be a member of the Cabinet, but also be in a position to grant Cabinet positions to six other members of his party, and maybe even change the balance of power in the government.

As a seasoned politician, Herzog knows how to build a platform that will make it possible to join the government. It involves all sorts of general commitments to the diplomatic process and the supremacy of the law, ideas iterated by Barak and Zionist Camp co-leader Tzipi Livni before him. That’s the easy part. His problem is that he has no one to discreetly piece together such a complex political move like Binyamin Ben Eliezer, Shalom Simhon and Ofer Eini did for Barak in 2009, ultimately bringing him into a unity government despite fierce opposition within Labor.

Herzog is finding himself pushed into an increasingly complicated corner. While his party is galloping toward the primaries, he is doing everything he can to stop the elections for the Labor leadership by bringing the party into the government. The way things look now, this option is slipping away from him, even though it may in fact be the best option Labor has at this point.