Labor Party head and opposition chair Isaac Herzog is finding himself on shaky ground, coping with a corruption investigation that rivals believe is damaging to the party. 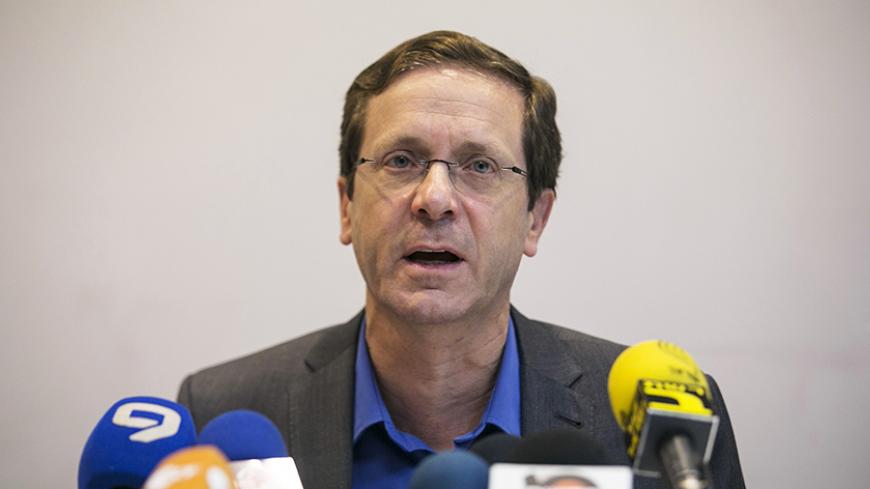 The latest edition of The Economist dedicated an article to the chairman of the Israeli opposition, Knesset member Isaac Herzog. The headline was phrased as an almost rhetorical question: "Curtains for Herzog?" The article itself described him as a politician whose fate has been sealed, an opposition leader who has failed to provide an alternative to Prime Minister Benjamin Netanyahu and whose party, Labor, is unable to present a coherent and effective alternative to Netanyahu’s Likud. In short, an ideal opposition chairman for Netanyahu.

For Herzog, an avid reader of opinion pieces in the world’s major newspapers, this one was particularly stinging. It presented a miserable image of Herzog as seen by foreigners who have no axe to grind and who just a year ago considered him a possible candidate to bring down Netanyahu’s regime.

A day before the article came out, Herzog was confronted with a hard-hitting April 21 Haaretz editorial that simply called for him to be replaced. The reason: his troubling and apologetic remark at a political rally in the town of Ashkelon. He said that the public perceives Labor as a party that "always loves Arabs." This unfortunate comment, which seems to have been designed to enhance Herzog’s efforts to pull the Labor party to the right and plug the drain of its supporters to the centrist Yesh Atid party of Yair Lapid, was damaging. It exposed a loss of direction and confusion within the main Israeli center-left party and presented Herzog as a desparate man, days after he was questioned by police on suspicion of campaign funding fraud. The storm generated by his remark, which also drew fire from within his own party, only intensified calls for him to quit or to suspend himself as long as he is under investigation.

Nonetheless, at the beginning of the week, fate seemed to be smiling faintly in Herzog’s direction. It seemed the chairman of the Zionist Camp could breathe easy as far as a criminal indictment goes. Based on police leaks on April 24, there may be insufficient evidence for an indictment and the police intends to recommend that the case against Herzog be dropped.

Prior to that, it appeared that the Labor Party's preference was still to eulogize its leaders before their time, if not act to unseat them outright.

For example, Knesset member Shelly Yachimovich, who is once again considering a run for the party leadership, explained that the suspicions against Herzog are damaging to the party. She hinted that Herzog might have to suspend himself, saying, "If there are developments, we will make decisions accordingly and I have complete faith in Herzog that he, too, will make the right decisions if the need arises. … I will work closely with him and with my party colleagues in deciding what steps to take. There’s no doubt that a party chairman being questioned under caution worsens the situation."

The criminal investigation appeared to be the final stage of Herzog’s political collapse. But while the knives were going in, the sudden police leaks stopped the witch hunt. For now, at least, Herzog has been saved from criminal entanglement.

This is obviously good news for him, but not good enough to stop his political decline, which began before his questioning and appears set to continue.

The attacks against him and the commotion within his party over the police probe only served to expose in one fell swoop the depth of the crisis Herzog and Labor are facing. They revealed heated internal battles and outed those seeking to replace Herzog, including Yachimovich, Knesset member Erel Margalit and Knesset member Amir Peretz, who preceded Yachimovich as party chairman. In recent weeks Labor has been portrayed as an opposition party unable to mount a challenge to the regime with a chairman who cannot rise above Netanyahu and the Likud.

In fact, Herzog peaked in the March 2015 elections. The 24 Knesset seats won by his Zionist Camp with Tzipi Livni were a kind of miracle for Labor. But there has been no forward momentum since.

Herzog had sent out feelers about joining Netanyahu’s government almost from the start. Within the opposition bloc he faced an ambitious player in Lapid, who managed through hard and focused work to steal support from the Labor party in the polls by mounting a quasi-right-wing campaign.

Herzog is left with an election failure, a lax opposition, low poll results and a party in crisis. He can only console himself with the fact that despite his great weakness and the calls for him to step down, there is currently no candidate sufficiently attractive to replace him. Had there been such an alternative, Herzog would have been replaced long ago.

None of those who view themselves as running for the party leadership are harbingers of good news and electoral support. Yachimovich and Peretz had the job and failed at it; they are perceived as worn-out political figures and they suffer from the same flaws that prevented them from taking power in the past. They failed in their attempts to turn Labor into a large center-left party.

The new candidate, Margalit, is for now no more than a social media sensation. The video clip he released, in which he is shown buddying up with party colleagues and lashing out at others, went viral and exposed him to the public at large as an Israeli-style Donald Trump. But he will have to prove that there’s more to him than gimmicks.

And once again, there does not seem to be a leader in sight who can redeem the party from the ignominy of the opposition. Thus, despite his fragile political standing, Herzog’s chances of holding on to the chairmanship aren’t bad. In his favor it should be noted that he displays impressive resolve in the face of his troubles. He has no intention of giving up and his prospects of winning re-election are not insignificant.

In fact, it is not inconceivable that Herzog has the most to gain now from moving up the leadership primaries and ending this twilight period. Re-election will enable him to conduct himself with more assurance and to lead the move (in which he believes) into the Netanyahu government. This is especially true given that there isn’t a single likely scenario right now predicting Labor’s return to power.