In Israel’s Labor Party, everybody fights everybody 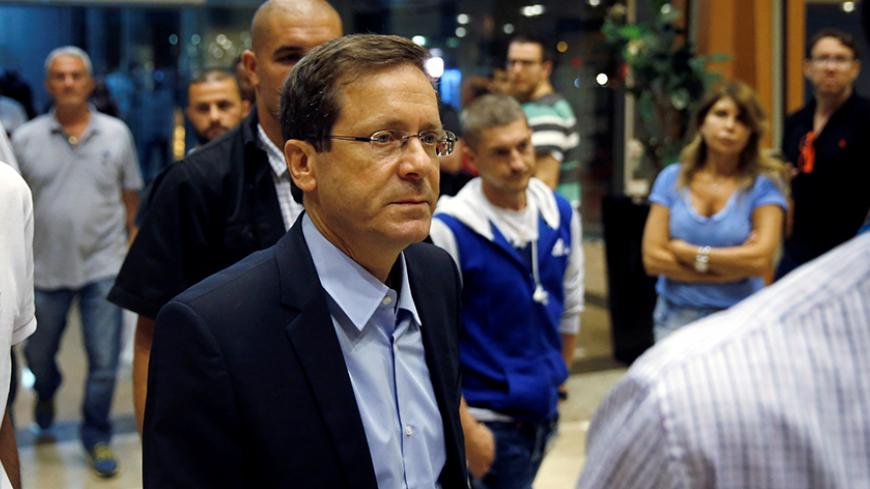 On the night of March 5, Chairman of the Labor Party and Knesset member Isaac Herzog flew to Moscow for a diplomatic visit, leaving behind him a party in chaos — in the throes of an all-out war.

Herzog’s leadership rivals — Knesset members Shelly Yachimovich and Eitan Cabel — are currently struggling to handle the media exposure of their own lies about the existence of a political deal between them in which Cabel would help Yachimovich run to head the Histadrut (the general labor union) and Yachimovich would help Cabel run to head Labor. And so, Herzog could enjoy a little political quiet after long months of humiliation and attacks from within his own party.

The deal between Cabel and Yachimovich — indicated in a recorded conversation between them — exposes Herzog’s two rivals as small-time, shady politicians. But this isn’t the only thing encouraging Herzog these days. He is also enjoying the disclosure of a regional peace initiative, which was the basis of his coalition negotiations with the Likud six months ago. These coalition talks and the secret initiative itself were both thwarted by Netanyahu. At the time, with the initiative kept secret, Herzog was strongly criticized by his peers for negotiating with Netanyahu. Now, suddenly, Herzog got an ideological alibi for what then seemed like his crawling into Netanyahu’s government. Back then the talks actually damaged the party fatally, ruining its image as the main alternative to the right’s rule.

Yair Lapid, the chairman of Yesh Atid, reaped the benefits of this political damage, as he collected more and more disappointed Labor voters for his party. We can assume that the latest mud wrestling in the party will only sharpen the disappointment of former Labor supporters and increase the pace of the defection to Lapid.

In the recording publicized in the media, Cabel called Herzog a “cheater, a manipulator of small-time thieves,” and added that “he doesn’t count in the party; he has no power in the party.” Thus, Herzog’s small consolations don’t change the miserable picture: The Labor Party not only lost the last 2015 election to Benjamin Netanyahu, but even after the election, it didn’t really put up a fight. With 13 Knesset seats less than the Labor Party, the Yesh Atid Party managed to win over the image of leader of the opposition and the image of the party that offers an alternative to the government. This is a new low for the Labor Party.

Before Herzog flew to Moscow on Sunday, a date was finally set for internal elections for chairman of the Labor Party: July 3, 2017. Theoretically, this event should help the Labor Party restart itself and prepare for the next general election. Primaries with the participation of tens of thousands of party members are always a show of force and an expression of the democratic might of the party. But in actuality, even before they happen, these primaries are damaging the Labor Party. Since there are too many candidates — some of whom aren’t even familiar to the public — it’s no longer even clear who’s against whom. As of this week, there were at least seven candidates: party Chairman Isaac Herzog; former party Chairman Amir Peretz; Knesset member Amar Bar Lev; Knesset member Erel Margalit; former Minister Avi Gabbay, who joined the party recently; social activist Eldad Yaniv; and professor Avner Ben-Zaken. Former Gen. Yom-Tov Samia is considering running, as is Cabel — though in current circumstances he’d be better off putting those plans away and waiting for the next opportunity.

The chances that the election of a new Labor chairperson would lead to a significant rise in the polls seem minimal. Whoever is chosen would have difficulty rehabilitating the party after 2½ lost years in the opposition, which built up Lapid as the main alternative to Netanyahu.

While Labor supplies more and more embarrassing moments and stumbles, Lapid is at the height of an organized and disciplined campaign for prime minister that is yielding fruit. He convened a press conference in Tel Aviv on March 7 in which he presented seven respected heads of regional authorities who left Labor and Likud for Yesh Atid. Beyond the significance for the party’s morale, this political move has greater consequences. Heads of regional authorities are usually the seismograph that predicts a party’s political takeoff or collapse, since they traditionally seek to connect to the ruling party and its budgets. When the Kadima Party was founded in 2005, heads of regional authorities left Likud and Labor en masse to jump on the winning cart.

It is too soon to know who would run against Lapid for prime minister and whether Prime Minister Benjamin Netanyahu will survive the police investigations against him and run again in the next election, but it seems the chairman of Yesh Atid is ready for battle.

Compared with Lapid, the situation of the Labor Party seems grim. The question of why the Labor Party chops off its own head and shoots itself in the foot over and over is usually answered with an explanation about its DNA. Time after time, chairpersons who failed to win the general election were sacked: late President Shimon Peres, former Prime Minister Ehud Barak, Amram Mitzna, Amir Peretz, Shelly Yachimovich and now Isaac Herzog. The comparison to the Likud shows that the ruling party has a different DNA, one that leads it to unify around the chairperson and protect him under almost any circumstance, even when he is up to his neck in criminal investigation like Netanyahu is these days.

For comparison, the alleged suspicions against Herzog after the last election — that he violated the law on party funding during his campaign for Labor Party head — have turned into an inter-party civil war. Yachimovich attacked him on this head-on. A month ago, the case against Herzog closed for lack of evidence, but the damage to the party had been done.

Either way, this explanation of the party DNA misses the bigger picture. The Labor Party has been in a severe leadership crisis since Prime Minister Yitzhak Rabin’s assassination in 1995. Since then, for two decades, it has lost its way and lost its ability to offer a clear and reasoned alternative to the right’s path and its leadership.

The traumatic loss to the Likud in the 1996 election following the assassination led to a world war in the party and the rise of Ehud Barak. While Barak won the 1999 election, it was a brief and passing episode that lasted a year and a half. Since 2001, Labor has been in two states: a member of a right-wing government led by the Likud, or an opposition party that can’t manage to form an alternative.