Is Israeli Prime Minister Benjamin Netanyahu's sudden positive statements on the Arab Peace Initiative a reflection of his fears of a Palestinian statehood resolution at the United Nations? 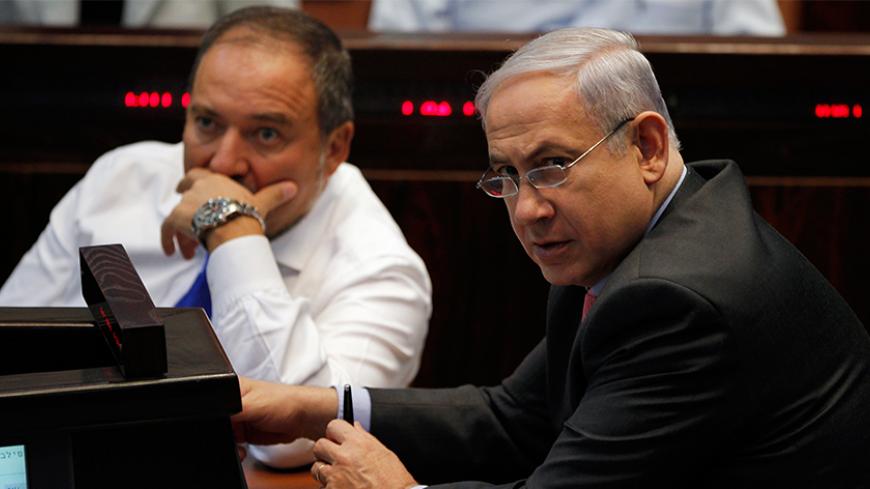 The sharp U-turns being carried out these days by Prime Minister Benjamin Netanyahu and his newbie Defense Minister Avigdor Liberman are overwrought, even for a cynical political system such as Israel's.

Until only a short time ago, Netanyahu continued to cater to his electoral right-wing “base”: He exhibited diplomatic recalcitrance, disqualified the two-state solution and acted more like an inflamed right-wing talk radio person than a prime minister. Liberman did all this too, only at a much higher volume. He even outflanked Netanyahu, announcing that the Gaza Strip needs to be conquered and that senior Hamas official Ismail Haniyeh should be killed (if Hamas won’t return the bodies of missing Israeli fighters) in addition to making a series of other "recommendations" of this type.

Suddenly, almost overnight, the two of them are singing an entirely different tune. They recognize the Arab Peace Initiative as a basis for negotiations (albeit with reservations), and practice saying the word “peace” again in every possible inflection. Netanyahu broke his own record last week when he begged Tzipi Livni, the head of the Hatnua party and partner of Labor in the Zionist Camp, to quit the Zionist Camp with her four Knesset members and join his government as justice minister. Until a few weeks ago, Netanyahu had tried to convince Zionist Camp leader Isaac Herzog to enter his government without his archenemy Livni. Suddenly, Netanyahu rediscovered her.

The educated guess is that Netanyahu has two cumulative reasons that pushed him into this change of strategy. The first is the series of investigations that began in May with a recommendation to submit an indictment against his wife, and now continue with investigations against Netanyahu himself. This issue will intensify greatly in the coming weeks and we will expand on this in future articles. The second reason is the diplomatic scare that has gripped Netanyahu, which he has passed on to Liberman.

According to a senior political source who spoke to Al-Monitor on condition of anonymity, the new defense minister, in closed conversations, has been describing the hell awaiting Israel in the coming months as a “diplomatic hurricane.” This is a new variation of the “diplomatic tsunami” that Ehud Barak predicted in his term as Netanyahu’s defense minister in the early 2010s. Somehow Netanyahu and Barak managed to circumvent, neutralize and avert that tsunami. But the new hurricane is arriving quickly and gives us the impression that this round will be much harder than the last one.

The conspiracy theory developing in Jerusalem regarding what awaits Israel in the international arena in the coming weeks is as follows: Netanyahu presumes that the French initiative is a maneuver that is meant to fail so that the Americans and Europeans can tell themselves, the public and Israel “we tried everything.” Egyptian President Abdel Fattah al-Sisi's initiative looks like a potential lifeboat to Netanyahu, but the latter is well aware that its chances are not high.

Netanyahu’s strategy, which Liberman has also adopted, is to create a diplomatic ''preventive strike'' that will get US President Barack Obama and the Europeans off of Israel’s neck for the next critical five months before the US elections.

Netanyahu is the master of such special effects. For months, he planned to do the strictly necessary minimum that would enable him to calm down the international front and peacefully get through Obama’s lame-duck months, when the outgoing president will be free to do whatever he wants and get his revenge.

Netanyahu’s problem is that the critical element of his plan was to enlarge the government with the help of Isaac (Buji) Herzog. But this plan hasn’t worked so far; Herzog’s political weakness, together with Netanyahu’s shattered credibility, led to a big zero. And with right-wing HaBayit HaYehudi leader Naftali Bennett as a central element of his Cabinet, Netanyahu would have a very hard time creating the illusion of advancing on the diplomatic front. Last week, Bennett announced that HaBayit HaYehudi would resign from the government should there be any diplomatic progress. Herzog hesitates, Livni refuses and Yesh Atid Party leader Yair Lapid is "not a partner." Netanyahu is stuck in the right, trapped in a kind of lethal diplomatic corral.

The minimum demanded of Netanyahu to humor Sisi and embark on the famous regional initiative is some kind of freeze on West Bank settlement construction. This intent of embarking on the initiative was torpedoed by Likud’s right-wing sector, headed by Ministers Yariv Levin and Zeev Elkin, together with Herzog’s weakness.

So the Egyptian issue is stuck, the French initiative is lagging and Jerusalem is now waiting for the Quartet report (the European Union, the United States, the United Nations and Russia) on the situation in the Middle East that is supposed to be published at the end of this month. Under regular circumstances, the report would be received with a shrug and several warning lectures. But these days, its potential is much more deadly. Israel is investing tremendous efforts in emasculating the report and cutting out its harsh expressions and severe criticisms. Several versions and drafts of the report are circulating between the relevant capital cities (mainly Washington). One way or the other, the report will ultimately be published and will contain harsh criticism against both the Israeli and Palestinian sides, with an emphasis on the former.

But it’s not the Quartet report that worries Netanyahu and Liberman. Their eyes are on the UN Security Council. Their nightmare scenario is failure of the French initiative, stagnation of the Egyptian initiative, a harsh Quartet report and an American-European decision to launch a Security Council resolution that would not be torpedoed by an American veto. Netanyahu is well aware that such a resolution would constitute a dangerous precedent and could create a snowball effect. That, in turn, could transform Israel, within a relatively small amount of time, into a pariah state, hit by sanctions.

All this, before we’ve even talked about more worrisome American initiatives from Obama: a presidential speech with new parameters, or even bringing up these parameters for a vote in the Security Council, as a binding resolution.

In his darkest nightmares, Netanyahu goes through these scenarios and wakes up covered in cold sweat. He knows that everything he accomplished in the last eight years, in which he expertly put Obama through the wringer and made his life miserable, and with regard to the Middle East in particular — all this can go up in smoke in Obama’s last months of office. Netanyahu will do everything possible to avert this, so it is recommended that all the relevant observers and involved parties not take anything that Netanyahu says in the near future very seriously.