Can Obama wake Saudis from their dream of continued dominance?

US President Barack Obama is expected to attempt some delicate diplomacy when he visits Riyadh this month: mending fences with Arab allies while still urging them to pick up the pace in fighting terrorism. 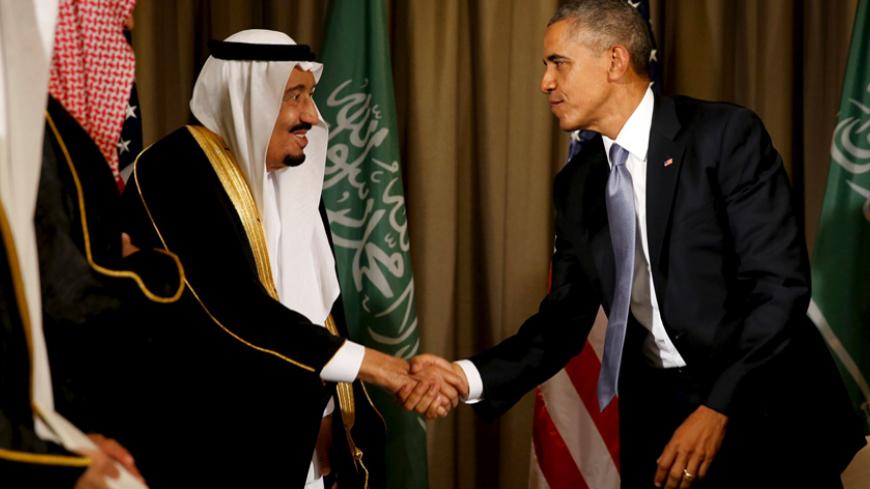 After a month of unpleasant exchanges between Washington and Riyadh, US President Barack Obama will visit Saudi Arabia on April 21 to attend a Gulf Cooperation Council (GCC) summit. In an interview in the April issue of The Atlantic, the president’s remark about US allies in the Gulf being “free riders” — for not contributing their share on the world stage — widened the rift in an already-strained relationship with Riyadh.

The remark prompted former Saudi Ambassador to Washington Prince Turki al-Faisal to write a detailed reply in which he reminded the president of a long list of Saudi contributions to regional peace. From humanitarian aid to Yemen and Syria, to fighting the Islamic State (IS) and sharing intelligence with the United States, the prince emphasized Saudi leadership contributions and credentials, debunking the president’s “free riders” comment.

Notwithstanding these unpleasant exchanges, on his visit to Riyadh, Obama will encounter a leadership totally immersed in the “audacity of hope,” determined not to share the Middle East — as Obama had hoped after the nuclear deal with Iran and had clearly expressed in his recent interview — but to emerge from the chaos that followed the Arab uprisings as the undisputed leader of the region. The American dream that has driven Obama and many others before him has met its counterpart in a Saudi dream that the leadership has been struggling to make come true.

The collision between the Saudi and American visions centers on one issue. Obama’s dream for the Middle East seems to envision the existence of multiple regional powers, all on friendly terms with the United States but without one of them dictating its will over the others. From Cairo to Tel Aviv, Ankara, Riyadh and Tehran, Obama saw a maze of competing claims and counterclaims about hegemony and control. He rightly distanced himself from all of them and pursued American national interest — which amid the chaos that engulfed the region meant that America became a distant but engaged source of support for those willing to abide by the rules of a new game.

However, while not trying to read too much into the president’s thoughts, it was so clear to many Arabs that Obama’s vision for the region was bound to collide with the Saudi dream of leading the Arab world into more-entrenched authoritarian rule. Several WikiLeaks documents demonstrated to many Arabs the contempt and disrespect that many American diplomats had for the region’s autocrats, with whom they had to fake friendship and respect. From Zine El Abidine Ben Ali of Tunisia to Hosni Mubarak of Egypt, the US administration was under no illusion that it was encountering the last days of a corrupt coterie waiting to be deposed. It may not, however, have anticipated the swift return of authoritarian rule, thanks to the systematic effort of America’s old allies such as Saudi Arabia and the heads of other GCC countries the president will meet in Riyadh.

Having enjoyed at least 40 years of being the endeared ally of America in the region, the Saudis did not agree with Obama’s vision of a multipolar region in which several states coexist, cooperate and perhaps compete in a civilized way.

From the moment Obama was elected in 2008, the Saudis struggled to assert their dream of emerging as the sole regional power without the American umbrella they had gotten used to since the 1980s. This rush to pursue the Saudi hegemonic dream was further accelerated as a result of the Arab uprisings that above all threatened the type of government the Saudis practice. Obama is perceived in Riyadh as the only US president who had shaken their dream and woke them up to an unpleasant reality as he pursued reconciliation with Iran.

"Many Saudis readily admit that they are now simply awaiting the end of President Obama's tenure, with some boldly proclaiming that anyone will be better than Obama,” Saudi analyst Fahad Nazer declared.

Such was the rift between the United States and Saudi Arabia that Obama has to fly to Riyadh, even at such a late point in his presidency, to convince the Saudis and other GCC countries that they remain key US allies, although they have to try harder when it comes to fighting the terrorism menace associated with IS and other groups.

The Saudis are exploiting the current rifts between the United States and its regional allies, from Cairo to Ankara. The Saudis even went further than that when they pursued more contacts with Israel, also an old and close US ally that Obama has collided with during his presidency. It is clear that the Saudis are seeking closer alliances with America’s disgruntled allies in the Middle East.

The departing president’s visit can only be seen as an attempt to inject a last-minute semblance of support to benefit the future US president. Neither Obama nor the Saudis are prepared to abandon their contradictory cherished dreams — Obama’s dream centers on regional multipolarity while the Saudis’ accepts nothing short of total hegemony.

If Obama’s visit is to make a lasting impact, he needs to try harder to convince the Saudis that the age of a single hegemon is perhaps gone, at least for the foreseeable future. The Saudis must recognize that deadly regional rivalries are better contained rather than exploited until they develop into full-fledged proxy wars.

Of course, Obama does not need to explain to the Saudis why their dream to lead the Arab world hasn’t come true. He does not need to remind them of why their model of Islamic governance has little appeal to the more than 300 million Arabs. He does not even need to ask why imprisoned jihadis are lodged in five-star rehabilitation centers while peaceful prisoners of conscience are dumped in the al-Hayer prison dungeons.

Such questions are difficult and will probably never be asked by future American presidents. These questions are better left to the active US nongovernmental organizations and media; both have done a great deal to alter perceptions of the so-called eternal and historical alliance between the United States and the Saudi kingdom.

The shift toward more critical assessment of the US-Saudi alliance, and the many doubts expressed in the United States about such an alliance, are doomed to continue in the foreseeable future. Many in the United States question grandiose Saudi claims that the kingdom can be the sole leader not only among Arabs, but Sunni Muslims worldwide. Such illusions are destined to develop into further conflicts in the Middle East — and beyond.