How Obama can push the Saudis to talk to Iran

As US President Barack Obama is due to visit Saudi Arabia, the UN Security Council should consider acting on its mandate to jump-start dialogue between regional actors on an inclusive security architecture. 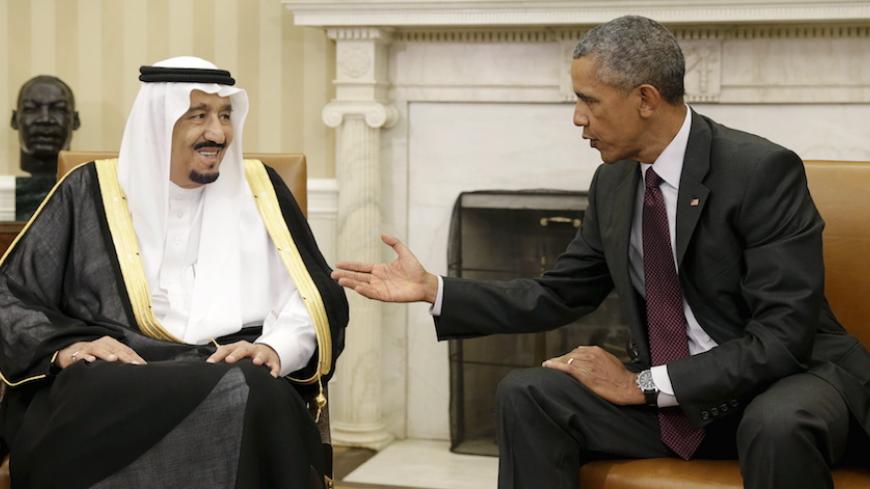 Following the signing of the Joint Comprehensive Plan of Action last year, the United States has been attempting to assure its Gulf Cooperation Council (GCC) allies that this will not open the way to Iranian-US rapprochement. "My view has never been that we should throw our traditional allies overboard in favor of Iran,” President Barack Obama has publicly declared. In this vein, Obama is scheduled to soon arrive in Saudi Arabia, which is set to host a GCC summit, gathering the organization’s other member states, namely Bahrain, Kuwait, Oman, Qatar and the United Arab Emirates.

As the fight against terror remains the highest priority for the world, the United States and the GCC continue to blame Iran for terrorism. However, the reality is that Iran is actively fighting the very terrorist groups that the UN Security Council has defined as constituting an “unprecedented” threat to international peace — namely the so-called Islamic State and al-Qaeda. The United States and NATO know very well the source of the ideology and funding of these groups. Obama himself recently told The Atlantic, “In the 1990s, the Saudis heavily funded Wahhabist madrassas, seminaries that teach the fundamentalist version of Islam favored by the Saudi ruling family.”

Democratic presidential front-runner Hillary Clinton also said at the Brookings Institution last September, “Much of the extremism in the world today is the direct result of policies and funding undertaken by the Saudi government and individuals. We would be foolish not to recognize that.”

Vice President Joe Biden, meanwhile, has accused US regional allies of supporting extremists in Syria in their eagerness to oust the regime of Syrian President Bashar al-Assad. In light of this, the sustained knee-jerk support of the United States for some of its regional allies is bewildering. As Iran’s Supreme Leader Ayatollah Ali Khamenei has stated, “Certain powers, the United States in particular, are neither sincere nor serious in the campaign against terrorism.”

Mistrust between Iran on the one hand and the US-GCC on the other has historically been deep — and mutual. Due to the multiple unprecedented crises raging in the region, it will be impossible to secure peace and stability without cooperation among all key regional players —particularly the GCC states and Iran.

One idea that has been floated by the GCC is a possible NATO-GCC partnership. This is an imprudent approach. In fact, to pursue such a coalition with the aim of isolating Iran has been proven as a failed strategy.

The GCC is an entity that was designed to counter Iranian influence. Meanwhile, the West has for decades also done all it could in terms of coercive policies to marginalize Iran. Indeed, the GCC and Western states supported Saddam Hussein’s invasion of Iran in 1980, and his use of chemical weapons against Iranian soldiers and civilians. Moreover, Western powers have engaged in covert war and imposed the most draconian sanctions regime against Iran. Yet the outcome of this has been that Iran has emerged as the most stable and powerful country in the region, while the GCC states are faltering in virtually every conceivable way.

Obama has contended that one option to solve regional discord is for Iran and Saudi Arabia to find a way to share the region. “The competition between the Saudis and the Iranians — which has helped to feed proxy wars and chaos in Syria, Iraq and Yemen — requires us to say to our friends as well as to the Iranians that they need to ﬁnd an eﬀective way to share the neighborhood and institute some sort of cold peace,” he recently told The Atlantic. Riyadh has up until now rejected coming to such a settlement with Iran, even as, an Iranian official recently told Al-Monitor, the United States has sought to bolster Saudi Arabia politically and militarily in order to encourage it to reconcile with Iran — an approach that the official framed as a major US concession. In a recent op-ed blasting Obama, Prince Turki al-Faisal, the former head of Saudi intelligence, revealed that Saudi Arabia’s goal is in fact to be in a “leadership role in the Arab and Islamic world,” an aggressive ambition Faisal wants the United States to continue underwriting. It is clear that Saudi Arabia is not seeking coexistence with Iran. Rather, even as it accuses Iran of pursuing a hegemonic regional strategy, it is itself openly seeking hegemony over the entire Islamic world — a dream that is dangerously destabilizing and impossible to attain or sustain.

A realistic scenario for Obama to discuss at the upcoming GCC summit is to forgo concepts of “hegemony” and “balance of power” and instead work toward establishing a sustainable regional cooperation system that includes Iran, the GCC states and Iraq. Such a system could be modeled after the Organization for Security and Cooperation in Europe, and the integration Europe has experienced since the end of World War II. The mechanism to initiate the process toward realizing this system already exists. UN Security Council Resolution 598, which was adopted on July 20, 1987, and laid the basis for the end of the 1980-88 Iran-Iraq War, requests of the UN secretary-general “to examine, in consultation with Iran and Iraq and with other states of the region, measures to enhance the security and stability of the region.” By adopting a new resolution, the UN Security Council can revive this mandate.

Moreover, the model that resolved the Iranian nuclear dispute can be used: negotiations mediated by the five permanent members of the Security Council plus Germany (P5+1). The foreign ministers of the P5+1 could negotiate with the foreign ministers of Iran, the six GCC states and Iraq on a new security structure for the Persian Gulf. They would work toward a scenario in which the two regional powerhouses — Iran and Saudi Arabia — would engage in cooperation rather than confrontation, to overcome the challenges of the post-Sykes-Picot and Cold War eras. To achieve this objective, greater flexibility in the United States’ relationship with the GCC as well as Iran is essential, and it would not only help end the Saudi-Iran cold war, but also the hot wars elsewhere in the region. A regional cooperation system in the Persian Gulf that regionalizes the burden of ensuring security, access to energy supplies and freedom of navigation is absolutely vital and would greatly benefit the cause of global peace and security. Now, more than ever, is the time for cooperation rather than confrontation.