The signing of the nuclear deal between Iran and the P5+1 can open the door to cooperation between Middle East countries. 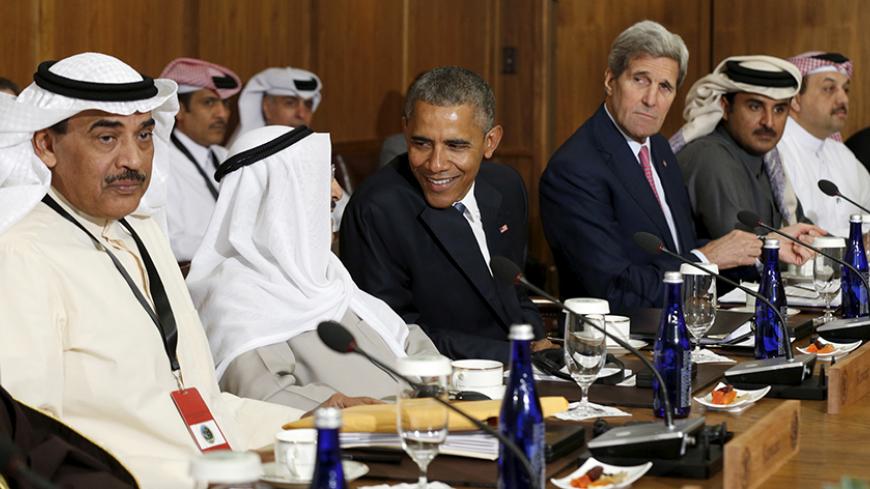 US President Barack Obama hosts a working session of the six-nation Gulf Cooperation Council at Camp David in Maryland, May 14, 2015. - REUTERS/Kevin Lamarque

President Barack Obama’s meeting with the Gulf Cooperation Council leaders at Camp David on May 14 looks by all accounts like a face-saving attempt by Washington. A well-publicized, high-wire meeting, verbal reassurances, perhaps promises of more political support and some advanced military hardware, that’s all. Nothing more can and should be expected; they simply cannot prevent the nuclear deal between Iran and the five permanent members of the UN Security Council plus Germany (P5+1) from going through.

The invitation to Washington, in the statement right before the nuclear framework agreement with Iran was announced in Lausanne April 2, was apparently meant to reassure the Arab states in the Persian Gulf that the deal with Tehran did not mean their abandonment. The psychological-emotional aspect of the suggestion was more than obvious. Initial expressions of Arab dissatisfaction with the expected deal — and more importantly, its longer term implications of a possible Iran-US rapprochement — signaled knee-jerk reactions to the development, bound to have quite serious repercussions for everybody: the United States, Iran and its Arab neighbors on the southern shore of the strategic Persian Gulf and on a larger scale, the greater Middle East. That much is certain, even if the exact nature of future developments have yet to unfold and the emerging regional power calculus is inevitably different from what it has been since the 1979 Iranian Revolution and the onset of tension and animosity between Tehran and Washington.

It is not difficult at all to fathom the reasons and rationale for the obvious sense of unease in the region as the prospects for a final nuclear deal become all the more real, despite all the naysaying in Tel Aviv, Congress and minority voices in Tehran. As widely discussed by analysts in the region and in the US press, the GCC countries appear to fear that the deal and the consequent lifting of sanctions with inevitable significant economic benefits would help Iran further pursue its so-called “regional ambitions” with more vigor — to their detriment. It is true that beyond the specific elements and technical parameters of the nuclear deal, once finalized and sealed, it would by itself usher in a new era in the region. In a somewhat changed atmosphere between Iran and the United States and their perceptions and expectations of each other, addressing and focusing on the imperatives of the post-nuclear deal should help diffuse a substantial part of the tension and its long shadows all through the region. The United States and its traditional regional partners hardly need to be advised on the centrality of Iran to the peace and stability of the Persian Gulf and the greater Middle East.

While it is true that the Iranian economy would be in a stronger position in the post-sanctions period, the GCC perception of threats — political and security — is not justified. Any keen observer of the Iranian scene knows that Tehran has a full plate domestically, and much of the freed oil revenues will be needed for improving its badly damaged national economy and the host of collateral social damages. Over and above the economic woes, Tehran will also have to focus on efforts to stabilize its surrounding environment, requiring, among other things, mending fences with its neighbors to prevent such potential security threats as the still rampaging Islamic State in Syria and Iraq from menacing Iran as well in the coming years. This, as already manifested in the Iranian assistance in the anti-IS military campaign, should serve as a base for better regional interaction between Iran and its neighbors in the Persian Gulf as well as with Turkey and Pakistan.

A closer look at the situation also reveals that the success of the anti-IS campaign — thus far constrained to some degree by the ongoing tension between Tehran and Riyadh, including on the sad Yemeni conflict — calls for an expeditious fence-mending between the two regional potentates. Foreign Minister Mohammad Javad Zarif’s recent emphasis at New York University that “Iran and Saudi Arabia and other countries in the region have a common interest in fighting this" betrays a perceptible indication of emerging political will in Tehran in the right direction.

The temporary cease-fire in Yemen, if supervised by the United Nations and extended as necessary, could pave the way for actual direct talks between Iran and Saudi Arabia, as an initial step toward diffusing the current tumult. Learning from the past and the unhappy state of affairs in the Persian Gulf, it is reasonable to argue that active and effective participation by Iran and Iraq in a region-wide understanding on a collective security arrangement, as envisaged in Paragraph 8 of UN Security Council Resolution 598, is imperative for the development of such an arrangement or mechanism. Considering the long term benefits of such a framework for regional security and cooperation, can we expect that the Camp David summit would address the actual needs of the Persian Gulf region and take some initial steps in this direction? Let’s wait and see.