A senior Arab official says the Gulf Cooperation Council is pleased at US assurances of a “strategic partnership” and calls on Iran to “modify its behavior” toward the region in the wake of a likely nuclear deal. 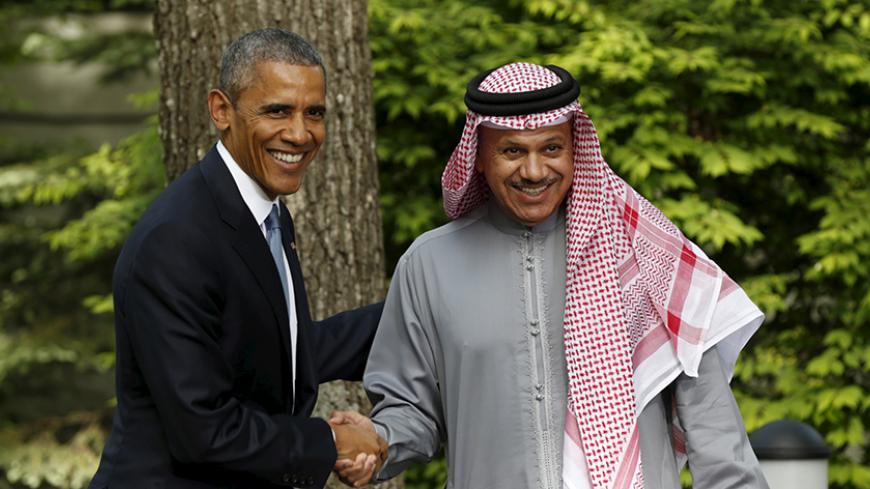 WASHINGTON — The countries of the Gulf Cooperation Council (GCC) may not have gotten what they wanted from the Obama administration this week, but they appear to have gotten some of what they need.

GCC Assistant Secretary-General Abdel Aziz Abu Hamad Aluwaisheg said at a news conference May 15 that the Camp David summit “exceeded the expectations of most of us” by reassuring GCC states of an “unequivocal” commitment to their security. President Barack Obama also stressed, Aluwaisheg said, that an impending nuclear deal with Iran does not represent a “pivot” toward Tehran.

“The US side made it very clear that they were aware of the issues that troubled us,” the GCC official said, speaking at the Arab Gulf States Institute in Washington. Obama “succeeded very well in putting those questions to rest.”

Marcelle Wahba, a former US ambassador to the United Arab Emirates and president of the Arab Gulf States Institute, told Al-Monitor that GCC members attending the May 13-14 summit welcomed a promised US package of increased support including more maritime security, special operations training and intelligence sharing.

According to a White House fact sheet, the United States and the GCC agreed to develop “a regionwide ballistic missile defense” including an early warning system, hold exercises “emphasizing interoperability against asymmetric threats, such as terrorist or cyber-attacks” and increase training in special operations and maritime security.

The United States also promised to expedite arms transfers, improve intelligence on the movement of suspected foreign fighters, set up a working group to develop an Arab rapid response force to deal with regional emergencies and hold another summit to review progress next year.

Aluwaisheg noted that the two sides agreed to describe their relationship as a “strategic partnership” and to follow up on all the pledges made this week.

But if the Arabs were looking for reassurance that the United States would not simultaneously continue efforts to improve relations with Iran, they did not get it. Instead, at a press conference at Camp David, Obama stressed that the “purpose of security cooperation is not to perpetuate any long-term confrontation with Iran or even to marginalize Iran. None of our nations have an interest in an open-ended conflict with Iran.”

“The comment that the purpose of all security arrangements is not to perpetuate conflict with Iran was clearly a signal to Iran not to see this as a collective effort to gang up” on the Islamic Republic, Wahba said.

“However, Obama [also] made the point that Iran needs to play a responsible role in the region and not a destabilizing one,” she said. “I thought the president's comment that the increased security arrangements and capacity enhancements are meant to give GCC countries the increased confidence so that they can engage Iran in a political dialogue was also important.”

Asked by Al-Monitor if the GCC states would now reach out to Iran or expected the United States to act as a mediator as it has to some extent in trying to achieve a cease-fire in Yemen, Aluwaisheg said Iran would first have to stop denying its support for groups that are involved in proxy wars in the region.

“If Iran says, ‘we’re not doing anything,’ it’s not happening,” Aluwaisheg said. “The meeting would be adjourned in one minute.” At the same time, he said, if Iran shows a willingness to admit its involvement in regional conflicts and to negotiate disputes such as its occupation of several islands in the Persian Gulf, the GCC will be ready to open a dialogue. If Iran agrees to “de-escalate its destabilizing behavior,” he added, “we all will pivot to Iran.”

Obama announced the summit with the GCC April 2 at the same time he disclosed that the United States, the other permanent members of the UN Security Council plus Germany and Iran had reached agreement on parameters for a long-term nuclear deal. The White House had hoped that the new Saudi King, Salman bin Abdul-Aziz Al Saud, would attend the summit but in the end only two heads of state — from Qatar and Kuwait — from the six-member GCC showed up. The king of Bahrain skipped the meeting to attend a horse show with Queen Elizabeth of Britain.

One purpose of the talks was to better explain the impending nuclear agreement to the GCC states and try to reassure them that easing sanctions would not empower Iran to increase support for proxies in a variety of conflicts roiling the region. Aluwaisheg said the president "made a very good case that this [nuclear] deal is the best deal we can have" and will verifiably prevent Iran from breaking out and developing nuclear weapons.

Colin Kahl, national security adviser to Vice President Joe Biden, told a meeting of the Arms Control Association on May 14 that Iran had lost $160 billion in oil revenues since 2012 because of nuclear-related sanctions and has “half a trillion dollars” in unmet domestic needs. “Iranian spending [after a nuclear deal] is likely to focus on domestic priorities,” Kahl said, “butter over guns.”

Kahl added that a nuclear deal is “not predicated on an assumption that Iran will change its stripes” in terms of its regional activity but is also “not a permission slip to continue to make trouble in the region.” However, instability in the Middle East, Kahl said, is “more a byproduct of [internal] weakness … than Iran’s inherent strengths.”

His comments underline the dilemma for the GCC that US guarantees of more support against “external aggression” do not address the internal grievances and frustrations that Iran has been able to exploit in neighboring states.

Aluwaisheg conceded that “the most difficult issues have to do with asymmetric threats” but put the onus on Iran for stirring up internal dissent. He called Hezbollah, Iran’s Lebanese partner, which has been active in Syria and Iraq, a “center of excellence for terrorism.”