US works to assure Gulf allies

US Secretary of State John Kerry has been in Paris to try and ease tensions with Gulf allies over the prospective Iran nuclear deal ahead of the GCC meeting in Washington. 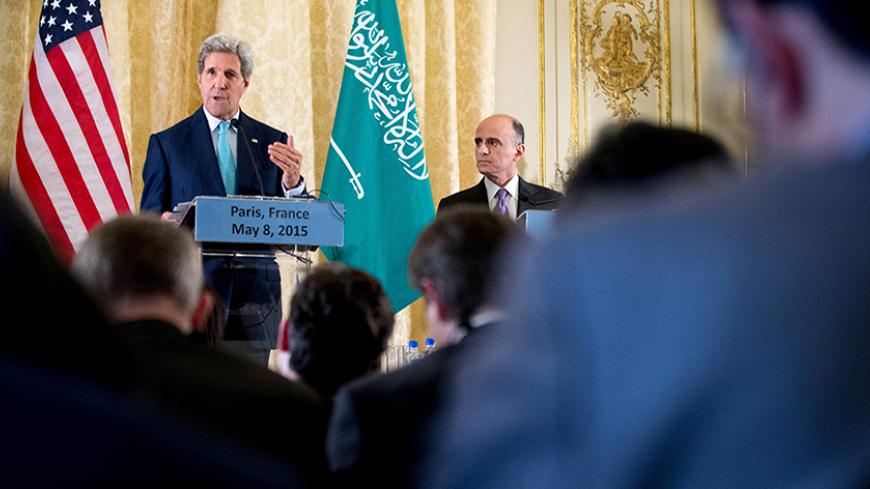 Washington — US efforts to bolster reassurance to Sunni Gulf allies amid growing prospects for reaching an Iran nuclear deal tried to recover from awkwardness and bruised feelings after Saudi Arabia announced that King Salman bin Abdul-Aziz Al Saud would not attend a White House-Gulf Cooperation Council (GCC) meeting May 13-14 after the White House had said he would.

President Barack Obama spoke by phone with Salman on May 11, the White House’s Ben Rhodes said in a conference call with reporters. Saudi Arabia’s new Foreign Minister Adel al-Jubeir said the king’s decision not to attend the summit was “not a snub” to the United States, and noted the decision to send both Crown Prince Mohammed bin Nayef and the Deputy Crown Prince Mohammed bin Salman — Salman's son and defense minister — was “unprecedented."

At a meeting between Secretary of State John Kerry and GCC foreign ministers in Paris last week, “We went through everything that we thought we should work on in a common fashion,” White House Middle East coordinator Rob Malley told reporters on the White House call May 11.

“Some of them wanted a formal treaty, something we told them weeks ago was not possible. We did not hear any dissatisfaction, though one [GCC member] reminded us they wanted a treaty,” Malley said.

GCC states’ anxiety about the Iran nuclear deal and what they see as Iran’s aggressive and destabilizing actions in the region are exacerbated by amorphous concerns that the US might seek a broader rapprochement with Iran, something US officials say is not the case.

“They are looking to us at this moment of uncertainty in the region to reaffirm that commitment” to their security, Colin Kahl, national security adviser to Vice President Joe Biden, told journalists on the White House call.

Malley said, “On Iran, there are a whole slew of concerns: whether once there is a deal, whether the US will turn its back on its traditional allies, … whether the [US administration] thinks the nuclear deal will lead to moderation of Iran’s behavior, which they think is not the case.” He added, “The point the president has made time and again, is none of that is the case. … We hope [Iran] changes its behavior, but the deal is solid and good if Iran doesn’t change.”

He said, “There is broad consensus that we need to be more creative, adjusting what kind of security cooperation takes place.”

Malley added, “Conventional weapons [are] something people focus on, but are not adoptive to the terrorist threat the region faces today. What kind of other means [would enable them] to meet the threats that conventional weapons are not best equipped to confront.”

The US invitation to GCC allies to meet with Obama at the White House and Camp David May 13-14 may have been well intentioned, but the summit was, in the eyes of the Saudis, poorly prepared, and will apparently offer little in the way of concrete deliverables, former National Security Council official (and Al-Monitor contributor) Bruce Riedel said.

“The Saudis I have talked to stressed they thought the [GCC US summit] was poorly prepared, they thought there was no deliverable, and they wanted to send a message they don’t have confidence in the US government,” Riedel told Al-Monitor on May 11. Salman’s decision not to attend “was a deliberate snub … meant to be clear and unequivocal.”

Of the six members of the GCC, only two, Qatar and Kuwait, are currently expected to send their heads of state, while — in addition to Saudi Arabia — Bahrain, the United Arab Emirates (UAE) and Oman are sending subordinates. (The UAE president and Oman’s Sultan Qaboos have longtime health concerns interfering with their travel).

It is difficult for the United States to bolster GCC confidence in deterring what they most fear from Iran, which is not direct attack but destabilizing actions perceived to take advantage of disgruntled minority populations, former State Department official Jon Alterman said.

He said, “It is unclear what relationship any guarantee the US could possibly give the GCC states would bear to these activities.” Any Obama administration pledge to defend GCC states from Iranian attack would “clearly [be] triggered by Iranian troops going in ships and landing on the shores of GCC states. But I don’t know a single person who thinks that is [a] reasonable” scenario.

New strains have emerged in US efforts to provide reassurance to the GCC over its concerns that Iran arms regional proxies, a factor in the current Saudi-led military intervention in Yemen. The US initially endorsed the operation and has provided logistical support, but in recent weeks has increasingly frantically urged Riyadh toward a cease-fire.

“You have this situation in Yemen where the Saudis are using US equipment and training, in their mind to defend themselves, [but in] the view of the US government to do something with the potential to be very dangerous,” Alterman said. “For the US, there is a real question of how much do you want to empower allies to act independently if there is a possibility they will act independently in ways very much against American interests.”

“Yemen is the bright shining example,” Alterman continued. “What do you do, … if these countries have the ability, … how do you stop them from doing things that you think they shouldn’t do?”

It has been apparent for several weeks that the summit idea was not selling well in Riyadh, but the US administration was trying to get the Saudis on board, Riedel said. Kerry traveled to Riyadh last week and met with the king and the foreign minister, and then met with GCC foreign ministers in Paris.

But while the focus of Kerry’s consultations with the Saudis was on trying to get a cease-fire in Yemen, the Saudis seem eager to continue military operations there, Riedel said.

“There is not a good grasp of how the Gulf works in Washington. And Saudi Arabia is acting in a very uncharacteristic way, bordering on drunk driving,” Riedel said. Both the king and his son see the “Yemen war as their signature issue. It does not look like it will have a happy ending.”

But the White House’s Malley suggested one of the US’ longer-term goals for the consultations with the GCC is to boost their own self-confidence to be eventually willing to undertake dialogue with Iran on ways to resolve security crises in the region.

“Part of this is to get GCC states where they can deal with greater confidence and self-confidence with Iran … to engage Iran to try to resolve the problems of the region which will only be resolved once the region tries to come together … to find security arrangements to stabilize the situation in Yemen, Iraq and elsewhere,” Malley said.