The new pulse of Gulf security

The Iran nuclear deal and the summit between US President Barack Obama and Saudi King Salman bin Abdul-Aziz Al Saud could signal a turning point in Gulf security. 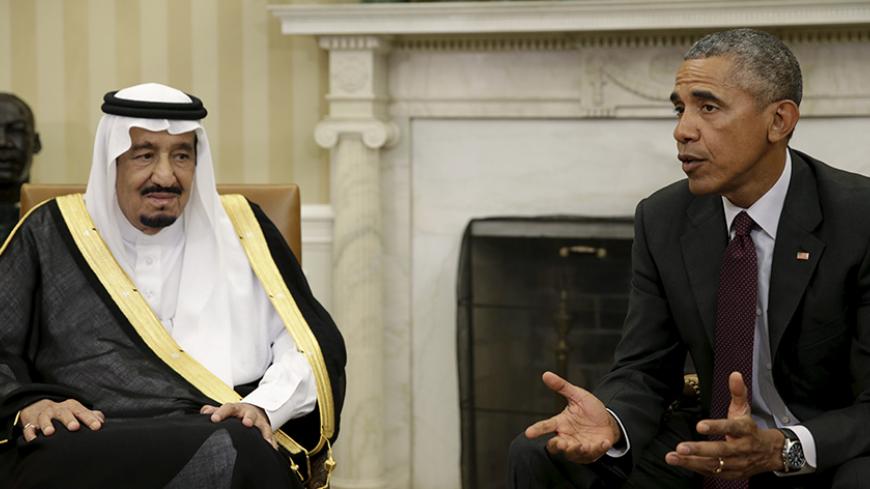 US President Barack Obama and Saudi King Salman bin Abdul-Aziz Al Saud reaffirmed the “enduring relationship” between their countries in a joint statement following their White House meeting on Sept. 4.

Differences are not the material of joint statements, and it was left to the leakers, pundits and advocates to remind us of the tensions in the bilateral relationship. But differences, either slight or significant, are more normal than not in US-Saudi relations. Today it’s Iran, and to a lesser extent Syria and Yemen; at other times it has been Israel, Palestine and Iraq. Bruce Riedel writes that the United States and Saudi Arabia have been “uneasy allies for 70 years. They share interests, not values.” In other words, the Saudi kingdom is not the United Kingdom.

For the record, Obama and Salman agreed to cooperate on Iran “to counter Iran’s destabilizing activities in the region.” The king also “expressed his support for the Joint Comprehensive Plan of Action between Iran and the P5+1 countries, which once fully implemented will prevent Iran from obtaining a nuclear weapon and thereby enhance security in the region.” The king’s position on the Iran deal reiterated and reinforced that of the US-Gulf Cooperation Council Camp David Summit in May.

For those who still might claim America’s “Arab allies” are opposed to the Iran deal, it is time for a fact check. As this column observed last month, it is Israel, alone among US allies and partners in Europe, Asia and the Middle East, that is on the record as opposed to the JCPOA.

Despite Salman’s support for the Iran deal, Fahad Nazer and Nawaf Obaid describe a trend toward a more assertive and militaristic Saudi regional posture, including what Obaid terms successful interventions in Bahrain, Yemen and, coming soon, Syria, to counter Iranian influence. Seyed Hossein Mousavian, presenting an Iranian perspective, places the burden of conflict on the GCC states and calls for a summit among Iran, Iraq and the GCC to be held in Mecca.

There is no doubt the Saudi-Iran fault line is based on a well-documented record of hostility. But a new approach, or pulse, to regional security in the Middle East could start with the Iran nuclear deal and the Obama-Salman summit. The US debate on the JCPOA is over as of Sept. 17, whether a congressional resolution of disapproval is filibustered or vetoed. It will soon be, literally, a done deal. The United States and the world community are putting Iran to the test on its nuclear ambitions. Saudi Arabia and the Gulf might do the same with regard to Iran’s regional policies. Why not meet in Mecca, or anywhere, to address the intra-Muslim strife that is contributing to so much tragedy in Syria, Yemen and elsewhere in the region?

Another point of departure is the thousands of Syrians seeking refuge from the war, which this column reported last month has been labeled by the UN Security Council as “the largest humanitarian crisis in the world.” Are the “Arabs” cheering a Saudi-led or other military intervention in Syria? Our hunch is that the people want the war to stop as soon as possible, and the politics can be sorted out later.

The Gulf states, in a twist, might instead consider opening their borders to Syrian refugees, as Sultan Sooud Al Qassemi proposed in the International Business Times last week. The European Union is opening its borders, and not without challenge or protest from some EU members and parties. Can the Gulf countries claim Arab leadership as it keeps out Arabs seeking refuge from a regional war, while Europeans are letting them in?

Neither Iran nor the Gulf states probably have any claim on leadership of the people of the Levant, who will judge the regional capitals on what they did to end the war, not to continue it. They will be looking for signs of inspiration, hope and goodwill. And there might be plenty of blame and resentment as well, which may not just be directed at Syrian President Bashar al-Assad, Hezbollah leader Hassan Nasrallah, Iranian Supreme Leader Ayatollah Ali Khamenei and the leaders of the Islamic State (IS) and al-Qaeda, but could also include those who were perceived to have stood by or prolonged the violence or backed groups that ended up terrorizing the population under Salafist banners.

The same applies to Yemen. The US public position is to back the kingdom’s intervention as a sign of friendship. But there is also a view in Washington that the Saudi-led military campaign will only destroy what little remains of state institutions, exacerbate the humanitarian crisis and provide the space for al-Qaeda in the Arabian Peninsula to grow even more, as is happening. The loss of 45 UAE and four Bahraini soldiers on one day in the conflict could signal an escalation or a rethink, or both. Yemen was a failing state in crisis before March 2014; it has gone from very bad to much worse as a result of the war.

Obama expressed his hope for a trend away from sectarianism and toward hopefulness and good governance in a July 14 interview with Tom Friedman.

“You weep for the children of this region, not just the ones who are being displaced in Syria, not just the ones who are currently suffering from humanitarian situations in Yemen, but just the ordinary Iranian youth or Saudi youth or Kuwaiti youth who are asking themselves, `Why is it that we don’t have the same prospects [as] some kid in Finland, Singapore, China, Indonesia, the United States? Why aren’t we seeing that same possibility, that same sense of hopefulness?’ And I think that’s what the leaders have to really focus on,” Obama said.

This column has consistently called for an inclusive approach to regional security that emphasizes the shared and growing threat from terrorism and the urgency of ending the wars in Syria and Yemen to address the dire humanitarian crises there. That Saudi Arabia and Iran would be immune from the incentive to unite against IS and al-Qaeda until now is bewildering. Hitler compelled the United States and the Soviet Union to bury the hatchet for the greater good, at least for a short time. The threat from IS and al-Qaeda is greater to Saudi Arabia than it is to Iran. But sustainable security requires more than counterterrorism; there is also an urgency for a new pulse of hopefulness, as Obama noted, and for a deeper intra-faith and interstate reconciliation that is long overdue.