Saudi Arabia's battle in Yemen and conflicts with Iran, coupled with the fall in the price of oil, point to a trying 2016 for the kingdom. 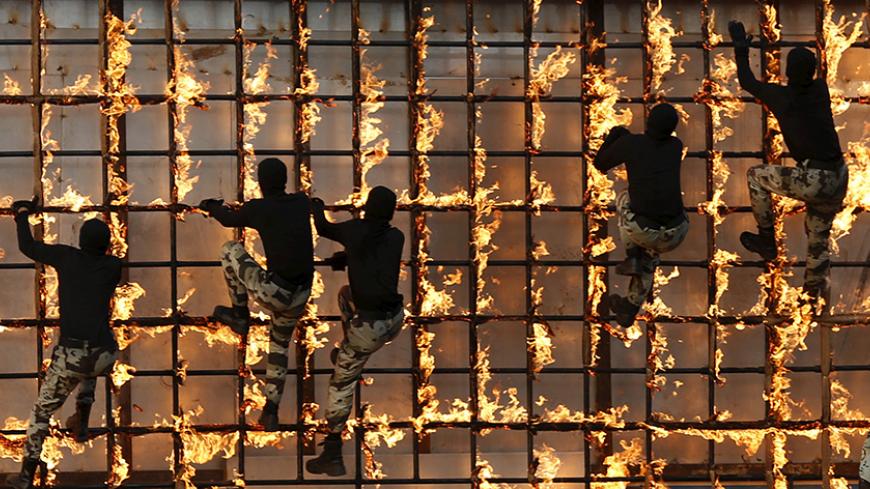 Members of Saudi security forces take part in a military demonstration in the holy city of Mecca, Sept. 17, 2015. - REUTERS/Ahmad Masood

Saudi Arabia faces an increasingly complex web of security challenges at a time when its economy is depressed. With oil prices unlikely to rise in the next couple of years, King Salman bin Abdul-Aziz Al Saud will have to balance carefully his foreign policy priorities.

The kingdom announced its new budget Dec. 28 with a record $87 billion deficit. Revenues are projected at $137 billion and spending at $224 billion.

Riyadh's immediate priority is the war in Yemen. The war costs an estimated $200 million a day, or $6 billion a month. The Saudi coalition and the Houthi rebels both violated the last United Nations-sponsored cease-fire. The Saudis did gain control of the capital of Jawf province along the Saudi border during the supposed truce. The talks in Biel, Switzerland, did not produce a breakthrough, but are to resume Jan. 14.

The Houthis show no sign of giving up. Their leadership remains hard-line and defiant. The war appears to be a bloody stalemate that has catastrophic humanitarian costs for Yemenis. The outside world pays little if any attention.

Even if a permanent truce is arranged in Yemen, the costs of stabilizing and reconstruction in the poorest Arab country are going to bear heavily on the kingdom for years to come. If Riyadh wants a stable government that does not tilt toward Tehran, it will need to spend billions to get it.

Maintaining the military government in Egypt is another top Saudi priority. Deputy Crown Prince and Defense Minister Prince Mohammed bin Salman, the king's favorite son, visited Cairo earlier this month and promised $8 billion in Saudi investment in Egypt over the next five years. In March, Riyadh promised $4 billion in aid, matched by similar pledges from the United Arab Emirates and Kuwait.

The kingdom also has provided significant aid to other key allies such as Bahrain, Pakistan and Jordan. The announcement this month that the kingdom is forming an Islamic military alliance to fight terrorism is consistent with the kingdom's long-standing efforts to mobilize the Islamic states to address critical global issues. It also reflects Riyadh's priorities and concerns and its desire to share the burden of fighting terrorism more equitably.

The new alliance was also announced by Mohammed in a rare press conference. The new organization has 34 members and will have a secretariat and operations center in Riyadh to coordinate counterterrorism operations.

Saudi Arabia has sponsored the development of Islamic institutions to push Islamic causes since the 1960s, when King Faisal believed that the Islamic states should unite to oppose international communism, Soviet aggression and to back Palestinian independence.

Faisal, king from 1964 to 1975, created the Organization of the Islamic Conference and the Muslim World League. He sponsored the first Islamic summit in Morocco to press for an end to Israel's occupation of East Jerusalem in 1969.

The new Saudi effort is designed to appeal to the same constituencies as Faisal's efforts both in the Islamic world and inside the kingdom. An effective Islamic counterterrorism military entente could mobilize Sunni Islamic states against Iran, al-Qaeda and the Islamic State (IS). It could also be a platform for more effective countermeasures in the ideological battle by mobilizing Islamic clerics. It will also be popular at home with Saudis who want a more energetic foreign policy.

The Saudis undoubtedly also hope the announcement will help silence criticism that the Saudis and their allies are doing too little against IS in Syria and Iraq because of their commitment in Yemen. The Saudis are funding parts of the opposition to Bashar al-Assad in Syria and will probably increase their support next year.

The new organization does not include Iran or Iraq. Riyadh sees Iran as a patron state sponsor of terrorism for backing the Houthis, Hezbollah and the Assad regime in Syria. It accuses it of promoting terrorism in Bahrain and other Gulf states. The Iraqi government is regarded as a pawn of Tehran. For Riyadh, the battle against Iran is as important as the battle against al-Qaeda and IS, perhaps even more important.

Several other countries are notably absent from the new Saudi-led alliance. Oman refused to join the war against the Houthis in March, and it is not among the new allies. Oman is determined to try to broker sectarian reconciliation among Sunni and Shiite states. It brokered the latest cease-fire in Yemen.

The largest Muslim country in Africa, Algeria, is also not a member. Algeria has been fighting al-Qaeda for over a decade and has the largest and most modern army in Africa; its absence weakens the clout of the alliance.

Afghanistan and the Central Asian states are also absent. Afghanistan is at the front of the war against Islamic extremists. Pakistan and Bangladesh are traditional Saudi allies and members of the new alliance, although Pakistan pointedly refused to fight in Yemen against the Houthis.

Mohammed probably also wants the alliance to bolster his credentials as a military leader. Some Saudis have had second thoughts about the Yemen war, which has not produced the decisive victory promised early on. A high-profile diplomatic and military event may quiet those doubts, at least for a time.

The leader of IS, Abu Bakr al-Baghdadi, has already ridiculed the new alliance. He said that if it really is an Islamic alliance, then it should make "killing the Jews and the liberation of Palestine its goal." Baghdadi told Israel that IS is getting closer every day to the Jewish state's borders.

Of course what really matters is creating an effective alliance. The Arab world has been talking about military alliances since the 1940s, but has yet to produce a serious arrangement. So far there is little sign the new alliance is any different. There was much confusion when the alliance was announced among the allies. Pakistan seemed divided on whether it had been consulted in advance, and so did Indonesia. But if it is a serious undertaking, it will require substantial Saudi financial support to make it work.

Finally, there is Saudi Arabia's uneasy relationship with America. President Barack Obama has sold the kingdom almost $100 billion in arms, but the Saudi media constantly bad-mouths him as unreliable. His Iran nuclear deal is denounced for not stopping Iranian subversion. America is blamed for Egyptian President Hosni Mubarak's fall, the Syrian civil war, Iraq's tilt to Iran, the growth of IS and much more. Unfortunately for Riyadh, more and more Americans blame Saudi Arabia for the growth of Islamic terrorism.

The year 2016 will be a difficult year for the kingdom.