The joint statement released following King Salman's meeting at the White House with President Barack Obama Sept. 4 indicates that they discussed the region's most pressing issues including the Iran nuclear deal, the Syrian civil war, the fight against the Islamic State and the war in Yemen. 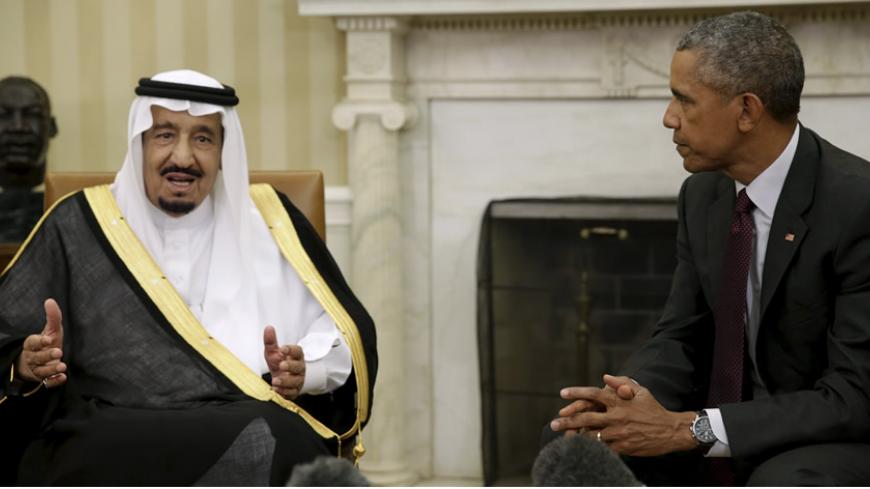 King Salman bin Abdul-Aziz Al Saud of Saudi Arabia visited the United States this week. While the Saudi monarch had traveled to other countries since ascending the throne in January, his visit to Washington was his first official state visit anywhere. To some, this fact by itself suggested that Saudi-US relations had recovered after coming under tremendous strain following the Arab Spring.

Salman met with President Barack Obama at the White House on Sept. 4, and senior members of his delegation attended a two-day conference focused on US-Saudi trade and investment opportunities. The king’s son, Prince Mohammed bin Salman, who is the deputy crown prince and minister of defense, also accompanied the delegation and spoke about investment and business opportunities in the kingdom. While one should expect both sides to highlight the mutual interests that have sustained this special relationship for seven decades, the joint statement released after the White House meeting suggested that the leaders of the two countries did not avoid the thorniest issues, including the Iran nuclear deal, the continuing carnage in Syria, the fight against the Islamic State (IS) and the war in Yemen. And while there has always been broad agreement between the two countries over these issues, the divergence over the specifics has not been insignificant. The visit seems to have been an attempt to bridge this gap.

The timing of Salman’s visit struck some observers as curious. Some have suggested that it was a final attempt to scuttle the Iran deal, coming mere days before the congressional vote. A few have even suggested that the Saudis tried to influence the vote by arresting the mastermind of the 1996 Khobar bombing in Beirut, after he had been on the run for almost 20 years. Both Saudi and US officials have long maintained that the attack, which killed 19 US servicemen, was the work of the militant Shiite group Hezbollah al-Hejaz, with the support of the Lebanese chapter of the group and elements in the Iranian government. However, Saudi officials’ comments about the agreement over the past few weeks suggested that they had come to terms with the reality that opponents of the agreement had a steep hill to climb.

Following the Sept. 4 meeting at the White House, the Saudi foreign minister said the Saudis were now satisfied after Obama had assured Salman that the agreement ensured that Iran does not acquire a nuclear weapon by establishing a robust inspection regime and allowing sanctions to be snapped back should Iran violate its obligations.

While the prevailing sentiment in Saudi Arabia remains critical of the agreement, the US administration has done a good job of selling the Iran deal to the Arab world. Not only has it been persistent, but it has put the onus on the critics of the agreement to provide a viable alternative. The Saudis, like much of the Arab world, seem to have concluded the current deal is preferable to none at all.

However, the Saudis have repeatedly made it clear that they are also concerned about Iran’s meddling in the Arab world, especially in Iraq, Lebanon and Yemen. They have also said that Iran’s continued support for Syrian President Bashar al-Assad is unacceptable. To allay these concerns, the Obama administration laid out a new US-Gulf Cooperation Council strategic partnership following June’s Camp David summit that would enhance security and military cooperation and fast-track delivery of advanced weapons systems.

Prior to the March launching of the Saudi-led military campaign in Yemen, Syria had dominated the Saudi news cycles. Saudi Arabia has invested tremendous political capital trying to oust Assad from power. The Saudis have not only condemned his relentless war campaign, but they have also argued that his regime’s brutality is the main reason that IS has been successful in recruiting thousands of foreign fighters.

Over the past few months, the US administration’s position on the future of Assad has been somewhat ambiguous; however, the joint statement that was released Sept. 4 stated that “any meaningful political transition would have to include the departure of Bashar [al-Assad] who has lost legitimacy to lead Syria.”

The progress of the Saudi-led military campaign in Yemen also figured prominently in the discussions. The US administration has repeatedly expressed its support for the campaign and has also provided the coalition with vital logistical support. For their part, the Saudis and their allies made a breakthrough when they forced the Iranian-supported Houthi rebels to withdraw from Aden. However, a missile strike against a weapons depot in Marib that killed 10 soldiers from Saudi Arabia, 45 from the United Arab Emirates and five from Bahrain on Sept. 5 could lead to an escalation in the fighting.

With the terrorist group al-Qaeda in the Arabian Peninsula seeking to expand its presence in Hadramawt and southern regions of Yemen, some observers are beginning to speak about a nation-building effort that the Saudis and Emiratis might have to lead to fill the security and political vacuum that emerges in the areas from which the Houthis have been ousted. However, whether the United States would entertain any role in such effort is debatable. Reports suggest the Saudis assured their American host that they would do more to relieve humanitarian suffering in Yemen.

Despite this broad agreement between the United States and Saudi Arabia, Yemen marked a stark departure for Saudi foreign policy, in large measure as a reaction to the perception that the United States has disengaged from the region. While the Saudis are concerned about the violence — and Iranian influence in Lebanon, Iraq and Syria — Yemen is Saudi Arabia’s proverbial red line.

As the country moved perilously close to another civil war, the Saudis were compelled to adopt the assertive foreign policy that some of their officials and analysts have been advising for some time. While there is no doubt that the Yemen campaign is meant to send a message to Saudi Arabia’s adversaries — especially Iran — it is also a message to its long-term ally that makes clear that while Saudi Arabia values its close relationship with the United States, the foreboding reality of the Middle East requires assertiveness. The Saudis have said that they will do whatever it takes to protect their interests.

The statement following the meetings shows that the Obama administration seems to have adjusted to this new Saudi posture. This is less than a dramatic resetting of parameters; Saudi-US relations seem to have undergone a recalibration of expectations. This decadeslong special relationship will endure.