Former Pentagon official says formal defense treaty with GCC is “not in the cards” at next week’s summit. 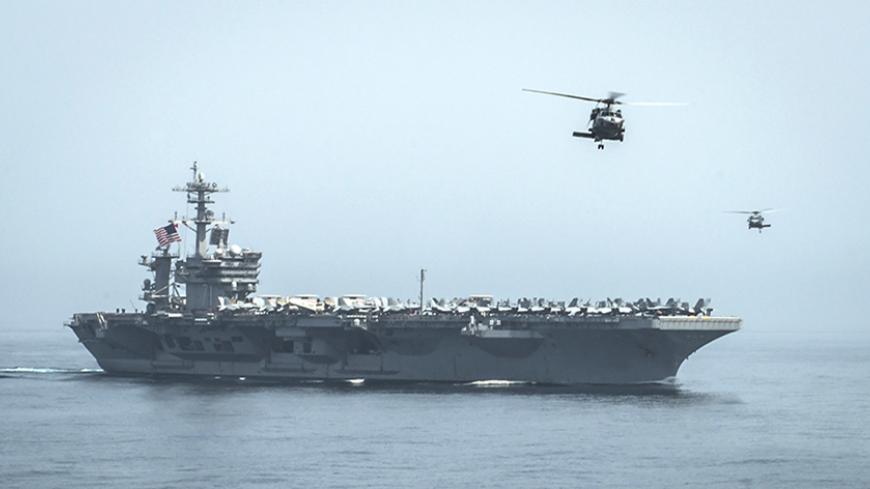 United Arab Emirates (UAE) Ambassador Yousef al Otaiba said May 7 that the UAE and other members of the Gulf Cooperation Council (GCC) “need something in writing” from the United States to better guarantee their security in the wake of an anticipated nuclear agreement with Iran.

But GCC members, whose leaders are scheduled to attend a summit with President Barack Obama at Camp David on May 14, will not get NATO-like assurances of automatic US aid, said Derek Chollet, who was assistant secretary of defense for international security affairs until the end of 2014.

The comments, made at an event at the Atlantic Council, suggest that US Arab allies may be left wanting despite US attempts to reassure them that an impending nuclear deal with Iran is not coming at their expense.

Chollet, who dealt extensively with Persian Gulf issues when he was at the Pentagon, said that the outcome of the summit would not be “any sort of NATO Article 5-like arrangement,” referring to that treaty’s pledge that an attack on one member would be considered an attack on all. “I don’t think a legal defense treaty is in the cards,” he told Al-Monitor in response to a question.

Instead, he said he foresees “a work plan” to enhance cooperation in more “creative ways,” including sharing more intelligence on a growing cyberthreat from Iran and encouraging more cooperation on missile defense. It is also possible that the United States and the GCC will agree to hold such summits on a regular basis.

During 10 hours of talks scheduled to begin May 13 at the White House and then move to the bucolic setting of Camp David in Maryland’s Catoctin Mountains, the United States and the GCC leaders are also expected to discuss burning regional crises including Syria, the fight against the group that calls itself the Islamic State (IS) and Yemen. But progress in the Iran nuclear negotiations was the catalyst for the meeting and the regional balance of power with Iran will likely dominate the discussion.

While the nuclear deal should “in theory reduce the sense of insecurity” felt by US allies in the region, it is having the reverse effect, according to Martin Indyk, a former US ambassador to Israel and State Department Middle East envoy, as Israel and the GCC states contemplate the prospect of an Iran freed from economic sanctions and able to access $150 billion in frozen assets and new oil revenues.

Indyk, who's close to Hillary Rodham Clinton, said he personally favors “a NATO-like nuclear guarantee” for the GCC — something Clinton once suggested as a way to keep GCC states from seeking their own nuclear arsenals. Obama “has to stand up to Iran more forcefully,” Indyk added, “in order to sell the [Iran] deal.”

Other analysts disagree and suggest that the channels of US-Iran communication opened up by the nuclear talks can be used productively to address other issues.

“We can’t associate ourselves entirely with the Arab view that Iran is an existential threat,” said Ellen Laipson, president and CEO of the Stimson Center and a former member of Obama’s Intelligence Advisory Board.

Iranian officials, including Supreme Leader Ayatollah Ali Khamenei, have held out the prospect of broader cooperation with Washington if the nuclear deal succeeds.

Iranian Foreign Minister Mohammad Javad Zarif, Iran’s top nuclear negotiator, called recently for a new “collective forum for dialogue” in the Persian Gulf to address the myriad conflicts there. But the major GCC states appear to be rebuffing Iranian overtures, instead telling Iran to get out of Arab affairs and appealing to the United States and other Western states, such as France, whose president attended a GCC summit in Riyadh on May 5 and announced a new sale of fighter jets to Qatar.

Otaiba said that the purpose of next week’s summit is not so much to obtain more weaponry but to “brainstorm about how the US and the GCC can come to a containment strategy” that would inhibit Iran’s regional ambitions — much as US-led nations contained the old Soviet Union during the Cold War. Most GCC countries “are more worried about Iran’s behavior than whether it will have 5,000 or 7,000 centrifuges” under a nuclear agreement, Otaiba said.

The issue of more intimate US-Persian Gulf military relations is further complicated by the Obama administration’s promise to do nothing that would undermine Israel’s qualitative military edge over Arab states — even though Israel and most members of the GCC share a negative perspective on the Iran nuclear deal and Iran’s other policies.

Also unclear is how the United States can protect regional allies from the consequences of problems that are exacerbated but not created by Iran. Iran, in general, does not attack other nations frontally but exploits discontent by local minorities to destabilize its adversaries.

Since reaching an understanding April 2 on the parameters of a comprehensive nuclear deal, Obama has said that the United States is willing to do more to protect GCC countries from external threats but that they need to address internal problems of poor governance and discrimination.

Richard LeBaron, a former US ambassador to Kuwait, wrote recently that it would be unwise for the United States to offer formal defense treaties to Persian Gulf monarchies that lack democratic values. Asked about this by Al-Monitor, the UAE ambassador said that his country “doesn’t share your democratic values but fought … six times” alongside US forces, including now in the coalition against IS. Otaiba said the UAE also seeks a stronger relationship with the United States in nonmilitary areas ranging from trade and investment to health care and education.

Otaiba called the summit “a great first step” that should become “an annual event.”

But retired Gen. Mark Kimmit, who served in top positions in both the Pentagon and State Department under President George W. Bush, told Al-Monitor that the Obama administration was “slip-sliding away” from the sort of assurances the GCC states want and need.