Can US reassure Arabs, Israel on Iran deal?

The United States can provide more weapons and intelligence to Persian Gulf states to deter Iranian aggression but cannot prop them up against internal threats. 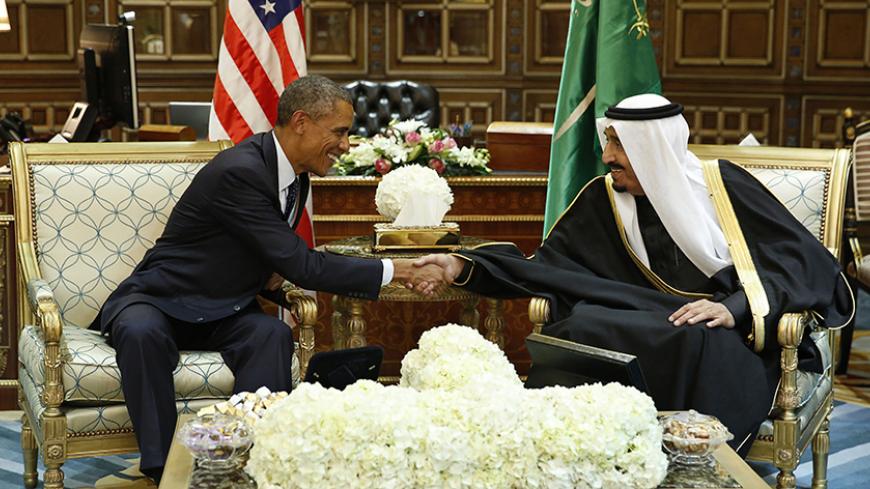 Sometime this spring, the leaders of the Gulf Cooperation Council (GCC) will come to Camp David, the woodsy presidential retreat in the Catoctin Mountains north of Washington that has been the scene of historic peace agreements.

There, President Barack Obama will attempt to reassure anxious Sunni Arab monarchs that an emerging nuclear agreement with Shiite Persian Iran will not fuel that country’s aspirations for regional hegemony.

In interviews since the Iran framework was announced April 2, Obama has suggested that the United States will provide some kind of formal security guarantees to key Persian Gulf allies.

"We're going to be there for our [Persian Gulf] friends," Obama told Thomas Friedman of The New York Times on April 4. "I want to see how we can formalize that a little bit more than we currently have, and also help build their capacity so that they feel more confident about their ability to protect themselves from external aggression."

But Obama also suggested that these autocratic regimes would have to find a way to deal with deep-seated internal problems and that the United States could not protect them from the consequences of repressive, discriminatory domestic policies.

This sets up a major challenge since Iran rarely attacks its neighbors head-on. Instead, its modus operandi has been to support local populations with legitimate grievances against their governments, particularly — although not always — groups that share Iran’s Shiite faith. This is a form of deterrence for Iran as well as an expression of its revolutionary “resistance” ideology.

An open question is whether a nuclear deal will embolden pragmatists in the Iranian elite to tone down such intervention and seek negotiated solutions to regional problems or whether more hard-line elements will be given even more freedom. In the latter case, what should the Obama administration do?

According to a US official who spoke on condition of anonymity, the GCC states’ defense budgets — a collective $135 billion annually— dwarf that of Iran, which spends about $18 billion a year. The United States has sold the United Arab Emirates F-16s that are more advanced than those used by US pilots and are decades ahead of the Shah-era F-4 Phantoms still flown by the Iranian air force.

But Persian Gulf states don’t work together well in terms of interoperability, missile defense and intelligence sharing. And F-16s won’t help the government of Bahrain pacify its Shiite majority and are unlikely to convince Yemen’s Houthis to accept the reinstatement of the Saudi-backed President Abed Rabbo Mansour Hadi.

The United States could provide more assistance to Persian Gulf states to defend against cyberattacks, which the Islamic Republic has employed as an asymmetric means of retaliating against its neighbors. There were dedicated denials of service attacks in 2012 on Saudi Aramco that wiped out data on more than 30,000 computers and followed imposition of severe new economic sanctions on Iran.

The United States is also providing substantial intelligence support to the Saudi-led effort to dislodge the Houthis in Yemen. But Washington has no easy answer to the catastrophic, multi-sided war in Syria even as it hints that it is still considering a no-fly zone on the border with Turkey to protect displaced persons and an elusive moderate opposition to Bashar al-Assad.

Some have suggested extending a nuclear umbrella over the GCC states and other regional allies as a confidence-building measure and to convince them not to develop their own nuclear weapons capacity. However, Richard LeBaron, a former US ambassador to Kuwait, said at a recent Washington event that that would be a “bad idea” because such guarantees should go only to “people who share very closely our interests and values.”

Ilan Goldenberg, a former US official now at the Center for a New American Security, said at the same event that such an alliance would have to be approved by the US Congress, which would be understandably reluctant to “trade Richmond (Va.) for Riyadh.” Iran has reportedly been developing an intercontinental ballistic missile that could theoretically hit the United States by the end of this decade.

Matthew Kroenig, a regional security expert at the Atlantic Council, told Al-Monitor that he also disagreed with extending a nuclear umbrella to the GCC because it suggests that Iran will eventually get nuclear weapons. A better idea, Kroenig said, is to “make it crystal clear that [the United States will guarantee that] Iran will never get a nuclear weapon, that we have a strategy for snapback of sanctions [if Iran cheats on a deal] or will be willing to use force if necessary.”

Recent comments by Saudi Arabia giving cautious support to the Iran deal appear to be an acknowledgement that the Saudis can’t prevent an agreement from being signed. Alireza Nader, an expert on Gulf security at the Rand Corporation, told Al-Monitor that the Arab states across the Persian Gulf from Iran “don’t have that much influence over the US Congress.”

A bigger concern is Israel, where Prime Minister Benjamin Netanyahu has repeatedly condemned the agreement as a “bad deal” that threatens the survival of the Jewish state. In the past, Israel has been blamed for assassinating Iranian nuclear scientists and infecting Iranian centrifuges with computer viruses. If sufficiently upset about the Iran deal, would Israel attempt such actions again to sink an agreement and preserve its monopoly as the Middle East’s only nuclear weapons state?

Obama has sought to deflect Netanyahu’s criticism and prevent unilateral Israeli interference with a nuclear deal by emphasizing what his administration has done to shore up Israeli security.

In an April 7 interview with NPR, Obama said, “The most important thing for Israelis is to know that they can defend themselves, and that they have America — the world's most powerful country — there to protect them alongside their military and their intelligence operations. And as I've indicated before, if you look at my track record since I've been in office, we have had as much or greater military cooperation and intelligence cooperation with Israel than any previous administration.”

Shlomo Brom, a retired brigadier general in the Israel Defense Forces and senior research associate at Israel’s Institute for National Security Studies, told Al-Monitor that Israel, too, could learn to live with an Iran deal and would likely seek compensation in terms of maintaining its qualitative military edge over neighboring states and nonstate actors.