Despite security and commercial ties with the United States, there is a growing trust deficit between Washington and Arab states on the Persian Gulf that fear the spread of Arab democratic movements and worry that the U.S. will sacrifice their interests for a deal with Iran. 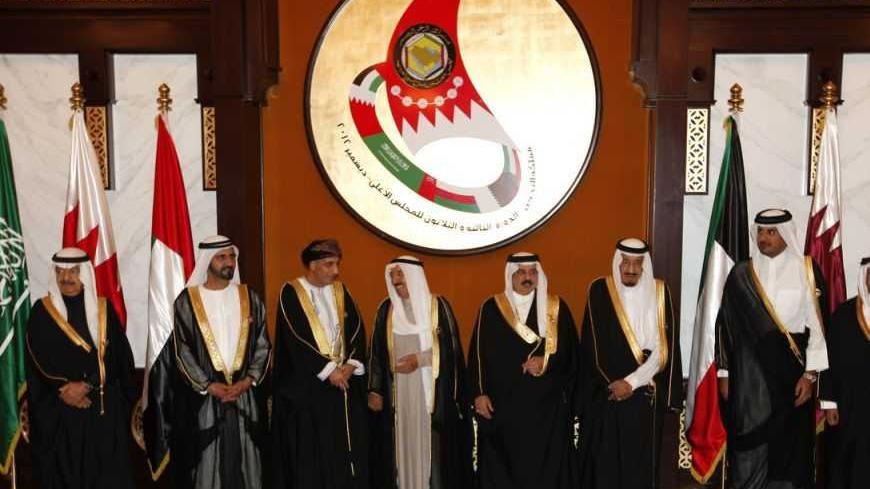 Dignitaries pose for a group photo before the start of the Gulf Cooperation Council (GCC) Summit at Sakhir Palace south of Manama, Bahrain, Dec. 24, 2012. - REUTERS/Hamad I Mohammed

WASHINGTON — News that the Pentagon can’t afford to keep more than one aircraft carrier in the Persian Gulf is sure to rattle U.S. allies already uncertain of American resolve against Iran and upset with U.S. policies toward recent Arab political transitions.

Saudi Arabia and other key members of the Gulf Cooperation Council (GCC) have grown increasingly reliant on informal American security guarantees and expensive US military hardware but are not in sync with Washington — or each other — on key regional issues, including the role of the Muslim Brotherhood and how to deal with Iran.

In a new report released Thursday [Feb. 7], Richard LeBaron, a former U.S. ambassador to Kuwait who's now a visiting senior fellow at the Rafik Hariri Center for the Middle East, said common security and commercial interests “have not translated into the deep mutual trust that form the basis of long-term alliances.”

Differences have grown in particular over policy toward new governments in the Arab world that have replaced decades-old dictatorships.

With the exception of Qatar, which has cultivated ties with a variety of Islamic groups, GCC members are especially worried about the rising profile of the Muslim Brotherhood which has challenged the Gulf’s hereditary monarchies in the past. The United Arab Emirates has cracked down hard on Brotherhood members as a purported internal security threat. LeBaron quotes an analyst from the UAE as calling the Egypt-based Brotherhood “the new Umm Kulthum, who will sing the song of Islamism in the whole region.”

Gulf countries have not provided significant financial aid or investment to Egypt and Tunisia in part because of their distrust of the Brotherhood and doubts about its competence.

The rich Gulf states are “prepared to stand back and see what happens to the Egyptian economy,” LeBaron said Thursday, rather than adopt a “Marshal Plan” approach.

At the same time, Gulf money is flowing to more extreme Salafists — including the Al-Nusrah Front in Syria which the U.S. State Department has designated as a terrorist group. The result is to make political transitions in countries such as Egypt and Syria even more difficult.

According to LeBaron and other analysts, Gulf states see U.S. acquiescence in the abrupt downfall of secular autocrats in Egypt and Tunisia two years ago as a continuation of wrong-headed US policies in the region that include excessive support for Israel and the overthrow of Saddam Hussein in Iraq, which led to the election of a Shi’ite Muslim-led government heavily influenced by Iran.

Retired Marine Gen. James Cartwright, a former vice chairman of the Joint Chiefs of Staff, told Al-Monitor that progress toward a common missile defense of the GCC had progressed substantially in the past five years, with GCC members “starting to understand they have a heck of a lot more strength coming together than being apart” and that if one country hosts a particular type of system, it will also be helping its neighbors.

However, a U.S. expert on missile defense and the Gulf, who spoke on condition that he not be named, told Al-Monitor that GCC members “have a long, long way to go” and that they are not yet willing to integrate their systems and “share information in real time” about potential threats.

Even though the GCC was created in 1981 in reaction to the Iranian revolution and the Iran-Iraq war, it has not evolved into a NATO-like security alliance. Smaller members fear domination by Saudi Arabia; countries such as Qatar and the UAE support different players in the Middle East. GCC countries also have varying views of Iran, with Oman and Qatar traditionally more lenient toward the Islamic Republic. Dubai also retains important if diminishing trade ties with Tehran.

“There is an underestimation of the individual personalities of these countries,” LeBaron told Al-Monitor, adding that it may be unrealistic and counterproductive to expect them to show more unity. The best the GCC can do, he said, is to try to “minimize differences.”

Ambivalence is particularly evident when it comes to Iran, where Gulf states seem to oppose all options. They don’t want Iran to get nuclear weapons but they also fear the consequences of a US military strike. And they certainly don’t want the United States to reach a deal with Iran that would undermine their regional status and elevate that of Iran.

In their view, “the United States is always looking to make a deal with Iran and that makes all the Gulf states nervous all the time,” said Jon Alterman, director of the Middle East program at the Center for Strategic and International Studies.

Deep insecurity on the part of smaller Gulf nations about their importance to the United States underlies their ambivalence about nuclear negotiations, which are scheduled to resume in Kazakhstan Feb. 26. Said Emile Hokayem of the International Institute for Strategic Studies: “They think that if there’s an agreement with Iran, we’ll all fly to Tehran and close our offices in Dubai.”

The announcement Wednesday [Feb. 6] that the U.S. Navy has indefinitely postponed deployment of the Harry S. Truman Carrier Strike Group to the Gulf — leaving the John C. Stennis as the sole carrier force in the area — only underlines what LeBaron called a Gulf perception of US “inconsistency.”

The Obama administration has kept two carrier groups in the Gulf since 2010 to project strength against Iran and support other regional operations. But the need to plan for a drastic cutback in U.S. government spending — the so-called sequestration scheduled to go into effect March 1 — required the deployment delay, said Pentagon spokesman George Little. “This prudent decision enables the U.S. Navy to maintain these ships to deploy on short notice in the event they are needed,” he said.

Barbara Slavin is Washington correspondent for al-Monitor and a senior fellow at the Atlantic Council where she focuses on Iran. On Twitter: @BarbaraSlavin1.