A regional military exercise hosted by Egypt excludes Qatar in a blow to anti-Iran unity. 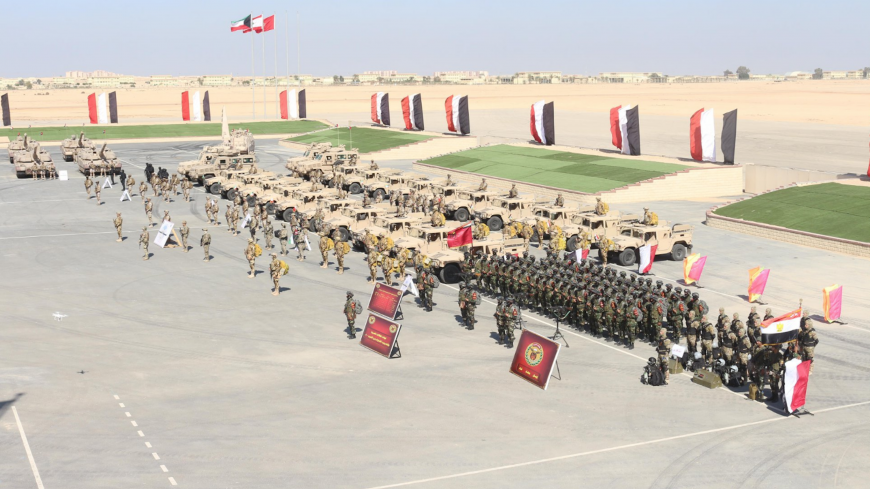 The Shield of the Arabs I exercise kicks off in Egypt on Nov. 3, bringing together troops and advisers from eight Arab nations. - FACEBOOK/Egypt Armed Forces Spokesman

The two-week-long Shield of the Arabs I exercise that started in Egypt on Saturday brings together troops and advisers from eight Arab nations in a glimpse of the joint strength of the region’s most powerful militaries.

But the simulation also underscores the political divisions fragmenting a unified front against Iran even as the Donald Trump administration resumes hard-hitting sanctions against Tehran this week. Qatar is excluded from the joint exercise with Egypt, Saudi Arabia, the United Arab Emirates, Kuwait, Bahrain and Jordan. Advisers from Lebanon and Morocco will also participate.

The Middle East Strategic Alliance (MESA), Washington’s name for a repeatedly delayed military consortium first floated by Saudi Crown Prince Mohammed bin Salman, remains slated for a delayed January rollout but could face another postponement. A US official told Al-Monitor that the Donald Trump administration hopes to see a resolution to the diplomatic row between Qatar and its Gulf neighbors before the alliance is formalized.

“The US is correct that a regional grouping should include the entire GCC [Gulf Cooperation Council],” said Zack Gold, an analyst at CNA, a Washington-based defense think tank. “If [the Americans] are sending the message of not joining an organization that doesn’t include Qatar, it’s an important message to send.” Doha said it would spend more than $1.8 billion this summer to upgrade al-Udeid Air Base, which hosts 10,000 US troops.

Gold added that US military cooperation with Gulf countries hasn’t been completely derailed by the Qatar crisis. In August, US Central Command (CENTCOM) said that 800 American troops participated in Operation Bright Star, another Egypt-based exercise that brought together 16 nations.

But the long-delayed MESA pact may face more trouble getting off the ground in the coming months, as the US administration pushes for a UN-backed cease-fire in Yemen and a full probe into the killing of Saudi journalist Jamal Khashoggi. Another US official told Al-Monitor in September that the meeting, first scheduled for April of this year, would also be focused on GCC reconciliation, not strictly on countering Iran.

Tim Lenderking, the State Department’s deputy assistant secretary for Gulf affairs, told the UAE newspaper The National in September that MESA would help create a “strong shield” against potential Iranian cyberattacks, and could help with a settlement to the conflicts in Syria and Yemen.

But US officials have failed to get the idea off the ground for decades. In 1997, then-CENTCOM chief Gen. Anthony Zinni favored creating an Arab alliance in war plans to counter Iran instead of a US-led assault he feared would get bogged down by Iranians sticking by the regime and by the country’s mountainous terrain. An attempt by the Barack Obama administration to develop a GCC-wide missile shield also stalled.

The Egypt exercise comes as the last two US defense secretaries have tried to keep US forces out of harm’s way by shifting the fighting to partners in Iraq, Syria and Yemen and supporting Arab nations with training, air power and refueling support. But that strategy, known in the Defense Department as “by, with and through,” has been beset by political turmoil and complex Middle East battlefields full of civilians.

In September, Secretary of State Mike Pompeo allowed US refueling of Saudi and UAE warplanes in Yemen to continue by certifying that the coalition had made a good-faith effort to reduce civilian casualties after the August bombing of a school bus killed 40 children and caused an uproar in Congress. Elsewhere, the Kurdish-dominated Syrian Democratic Forces have put the fight against the Islamic State on hold as Turkey launches cross-border attacks against the US-backed group, which has ties to the terrorist Kurdistan Workers Party.

US assistance for a future “Arab NATO” could be limited to military sales, even though Jordan and Egypt are two of the largest recipients of US military assistance. The first US official who spoke with Al-Monitor said the MESA grouping would not likely get backed with US taxpayer dollars. The State Department cleared more than $22 billion in US arms sales to the Middle East in fiscal year 2018, which ended Sept. 30.

“One of the things that we want them to do is to be interoperable with each other,” Gold said. “That’s why we sell them similar arms.”