Congress is trying to revive US-led talks for a GCC-wide missile shield against Iran that have stalled amid tensions with Qatar. 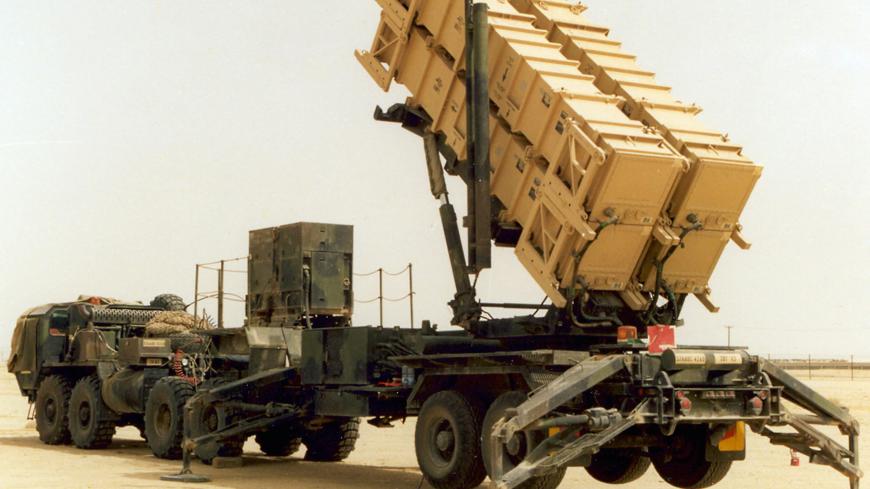 A US-made Patriot missile launcher of the Kuwaiti air force, used to shoot down incoming ballistic missiles, is deployed in an undated file photograph. - REUTERS

Congress is pressing the Donald Trump administration to revive a US push for a Gulf-wide missile defense shield to defend against Iran that has stalled amid a diplomatic squabble with Qatar.

The new language is aimed at figuring out “who’s going to shoot at … what incoming missiles so we can preserve inventory of the defensive missile interceptors,” a committee staffer told Al-Monitor. “It’s a continuing priority of the committee to work with our allies who bought US hardware to make sure that we are as interoperable and integrated as possible to be as effective as possible on a bad day.”

The United States has been pushing for GCC members to fuse their missile defense capabilities since at least 2014, the committee points out in the bill. All six GCC members — Saudi Arabia, the United Arab Emirates, Qatar, Kuwait, Bahrain and Oman — have acquired US-made radars and interceptors but have fallen behind on plans to integrate them, in part because of a Saudi-led blockade of Qatar over its ties to Islamist groups and Iran.

“The big problem right now is political,” said Frank Rose, a former assistant secretary of state who headed up US-GCC missile shield talks under President Barack Obama. “The GCC is not NATO. We’re not going to have GCC concepts of operations and rules of engagement.”

The threat from Tehran, which is believed to possess the largest arsenal of short- and medium-range ballistic missiles in the region, has come into renewed focus ahead of Trump’s announcement Tuesday on whether he plans to remain in the Iran nuclear deal. The House bill also includes language urging “unity and cohesion” among GCC members in the face of “growing threats” from Iran and proclaiming that “the timely normalization of diplomatic, security and economic relationships is in the best interest of the United States.”

The looming threat hasn’t been lost on Iran’s Gulf neighbors. Over the past decade, GCC countries have pursued major purchases of US missile defenses, with the UAE buying Terminal High Altitude Aerial Defense (THAAD) batteries, the most sophisticated land-based missile defense system the US exports, during the Obama administration. And Riyadh inked a $15 billion deal for a batch of the Lockheed Martin systems in October after flirting with buying a Russian-made alternative.

Oman is also in negotiations to buy the system. And the State Department approved a sale to Qatar in 2012, but it remains on hold because of “budget difficulties and operational concerns,” according to a March 1 report from the Congressional Research Service.

Under Obama's Secretary of State John Kerry, the United States also approved the sale of an early warning system to support the entire Gulf bloc, setting a new precedent on US military sales to the region that could help backstop a more integrated missile defense. The United States also has Patriot batteries deployed in every GCC country except Oman.

New Secretary of State Mike Pompeo has targeted a September date for a GCC-wide meeting to patch up the Qatar rift, and Rose said the White House should lead a push to get countries to share sensor data to get a better picture of the Iran threat.

“Sometimes your neighbor is better positioned to help you defend your own territory than you are,” Rose said.

Even as Saudi Arabia, the UAE and Qatar have frozen most trade ties and engaged in a media and lobbying tug-of-war, they maintain limited cooperation in the region, which gives experts hope of a compromise on missile defense.

For example, Qatar, which has the world’s third-largest natural gas reserves, still sends liquefied natural gas to Dubai through a bilateral pipeline. And after Saudi Crown Prince Mohammed bin Salman visited the White House in March, officials in Riyadh lauded Qatar’s recent efforts to fight terrorism, including deals struck with the US Justice and Treasury departments last year.

The renewed call for an integrated Gulf missile defense strategy comes as Congress is asking for the Defense and State departments to submit a report summarizing US efforts to develop and implement a strategy with foreign partners to counter Iran’s “destabilizing” activities in the Middle East. House aides have not indicated which countries would be involved in the strategy, which would include collaborating on intelligence, surveillance and reconnaissance, as well as deploying mine countermeasures.