Saudi Arabia gets US missile defense boost despite Khashoggi uproar 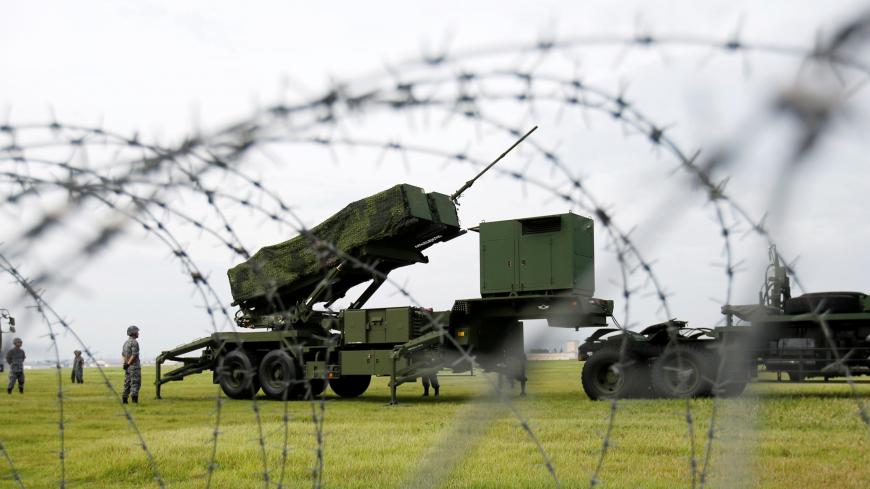 Saudi Arabia is to receive $195 million in upgrades to its Patriot Advanced Capability-3 (PAC-3) missile defense system under a Trump administration plan. Here, Japan Self-Defense Forces soldiers take part in a drill to mobilize their PAC-3 missile unit at US Air Force Yokota Air Base in Fussa on the outskirts of Tokyo, Aug. 29, 2017. - REUTERS/Issei Kato

The Donald Trump administration has approved nearly $200 million in upgrades to Saudi Arabia’s missile defenses, Al-Monitor has learned, despite continued congressional uproar over the murder of journalist Jamal Khashoggi.

Under the commercial deal approved by the State Department in December, Saudi Arabia will receive $195 million in upgrades to improve its Patriot PAC-3 defenses, including a guidance system that increases its ability to intercept ballistic missiles able to evade US-made radars.

Though the State Department notified Congress of the sale in December, it did not make the exact dollar value of the transaction public. The figures were provided to Al-Monitor by the Security Assistance Monitor.

A State Department spokesperson told Al-Monitor on background that Trump had indicated the United States would remain a “steadfast” partner for Saudi Arabia, despite tensions over the war in Yemen and Khashoggi’s death.

“For four decades and across seven US presidential administrations, Saudi Arabia has been an important partner for the United States in curbing the malign behavior of Iran, who is the world’s largest state sponsor of terrorism, and the source of the growing ballistic missile threat to our regional partners,” the spokesperson said.

Frank Rose, a former assistant secretary of state for arms control, verification, and compliance told Al-Monitor that the missile defense upgrade would improve algorithms within the system’s radar to target ballistic missiles such as those in Iran’s inventory.

While Riyadh has invested in Patriot batteries since the 1991 Gulf War, major Saudi cities have faced a barrage of scud missiles as Yemen has fallen deeper into conflict. Since the start of the 2015 war, there have been 133 reports of missiles intercepted from Yemen, according to the Center for Strategic and International Studies, a Washington think tank.

“It’s not theoretical anymore for the Saudis,” said Rose, now a fellow at the Brookings Institution. “This situation has caused them to rethink many of their assumptions around missile defense.”

The Patriots, Rose said, can help protect smaller installations such as airfields, but don’t provide enough coverage to defend a large city such as Riyadh, which has faced a series of near-misses from Houthi missiles.

The deal to bolster Saudi Arabia’s missile defenses comes as leading senators sought to block other types of US weapons sales to the kingdom after Khashoggi’s death. In the wake of the killing, a bipartisan bill sponsored by Sen. Robert Menendez, D-N.J., the top Democrat on the Foreign Relations Committee, aimed to suspend certain US arms sales to Riyadh, including ammunition, missiles and bombs, aircraft and ground vehicles.

In November, Saudi Arabia signed a letter of offer to obtain 44 Terminal High Altitude Aerial Defense launchers, known as THAAD. The state-of-the-art Lockheed Martin-made missile defense is theoretically capable of intercepting any projectile fired from inside the Middle East.

The Patriot deal, which went through the State Department’s direct commercial sales program that links up American weapons manufacturers with foreign customers, could provide another pipeline for the Trump administration to provide lethal assistance to Riyadh. The ballistic missile upgrades were among the last of $4.4 billion in US foreign military and direct commercial sales that the United States cleared for Saudi Arabia in 2018.

The sale of improved Patriot capabilities will also enable Saudi Arabia to deal with a potential missile threat from Iran, as Tehran’s elite Revolutionary Guard Corps has touted new projectiles with extended ranges that could target US vessels and reach beyond the Middle East. Even before exiting the nuclear deal with Iran in May, the Trump administration began to raise concerns about the regime’s extended missile capabilities and commitment to denuclearization in the long run.

“Iran’s development of increasingly long-range ballistic missile capabilities, and its aggressive strategy and activities to destabilize neighboring governments, raises questions about its long-term commitment to foregoing nuclear weapons capability,” said the Pentagon’s Nuclear Posture Review, which was released in March.

An accompanying US Missile Defense Review, which could lay out the Trump team’s road map for defending the Gulf from missile threats, had been expected in early 2018. It has yet to be released.

Archer Macy, a retired US Navy rear admiral who worked on air defense for years, told Al-Monitor that the Patriot sale would give Saudi Arabia “more tools in its toolbox” to defend against Houthi missiles, but wouldn’t be a magic bullet for air defense against the Iran-backed group.

“You have to decide what you’re going to engage and what you’re not,” said Macy, now a senior associate with the Center for Strategic and International Studies. “If something’s headed toward some chunk of the desert, you let it run.”

Correction: Jan. 15, 2019. This article has been updated to reflect that Sen. Menendez’s bill targets only four categories of arms.