Intel: How Trump used his missile defense rollout to take shots at Iran

President Trump chastised Iran for attempting to launch a satellite earlier this week and pledged the United States would take a harder line on Iran. 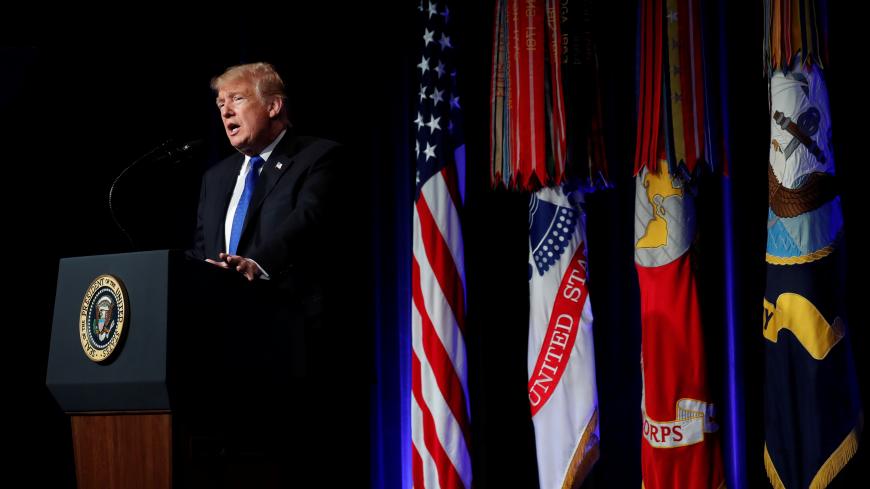 US President Donald Trump speaks during the Missile Defense Review announcement at the Pentagon in Arlington, Virginia, Jan. 17, 2019. - REUTERS/Kevin Lamarque

President Donald Trump, visiting the Pentagon to roll out a long-delayed missile defense review, today chastised Iran for attempting to launch a satellite earlier this week and pledged the United States would take a harder line on Iran. Tehran’s attempt to put the satellite into orbit failed Tuesday.

Why it matters: In a freewheeling 20-minute speech, the commander in chief took shots at Democrats in Congress and touted his border wall. He also said his plan to extract concessions from Iran through sanctions is gaining ground.

“The United States cannot simply build more of the same,” Trump said. “What we’ve done with Iran since I’ve become president is rather miraculous. I ended the horrible weak nuclear deal.”

The president added that the pressure from sanctions would drive Iran to the bargaining table. “It’s not the same, and it won’t be the same. And I do believe they want to talk,” he said. Trump also floated talks with Iran in July, but Tehran is highly unlikely to come to the table unless Secretary of State Mike Pompeo drops his list of 12 demands, which include that Iran stop ballistic missile development and end support for Shiite proxy groups.

New defenses? The long-awaited review, first expected in 2017, calls on the Gulf Cooperation Council to “acquire and deploy missile defense capabilities” to “provide the basis for a networked, layered defense across the region.” Such a shield would include upgraded Saudi Patriot PAC-3 and THAAD batteries, as well as similar systems in Kuwait and Qatar.

Experts told Al-Monitor that those efforts have stalled under the Trump administration, owing largely to the Saudi-led blockade of Qatar. “Towards the end of the [Barack] Obama administration, there was talk by the GCC of setting up a joint analysis center, and we did some studies on this,” said Frank Rose, a former assistant secretary of State. “But unfortunately, given the political situation, that has retarded the ability to go forward on this.”

What’s next: The Trump administration now has to figure out how to pay for its missile defense plan, which includes space-based sensors to deal with the emerging capabilities of US rivals China and Russia. Defense officials sidestepped that question at a press conference after the president’s remarks. The Pentagon is supposed to submit its next defense budget, which would fund its missile defenses, by early next month.