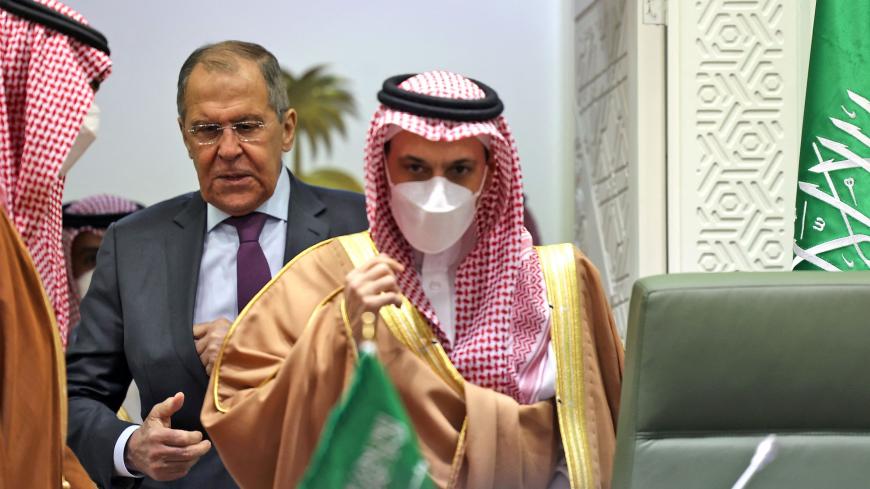 “The kingdom will take necessary deterrent measures to protect its national resources,” Foreign Minister Prince Faisal bin Farhan said in Riyadh on Wednesday during a press conference with his Russian counterpart, Sergey Lavrov.

“The failed attempts to target the port of Ras Tanura do not only target the security of the economy of Saudi Arabia, they target the global economy and its oil supplies,” Prince Faisal said.

He did not specify what measures would be taken, but called on the international community to take a stand against such attacks in the future.

Yemen’s Houthi rebels claimed credit for what they said was a ballistic missile and drone attack on Ras Tanura on Sunday. Saudi officials said a single drone launched from the sea targeted Ras Tanura, but that no one was hurt and no property was damaged. Explosions were also reported near an Aramco residential facility at Dhahran and near military positions in Dammam.

The global price of Brent crude surged past $70 per barrel Monday following the attack before eventually stabilizing. The Saudi Arabia-led Gulf military coalition responded by bombing the Houthi’s capital at Sanaa in Yemen for the first time since the Biden administration halted offensive operational support to the coalition citing human rights concerns.

A 2019 drone and cruise missile attack on Saudi Arabia’s Aqbaiq and Khurais oil facilities shut down production at the sites, plunging the country’s daily production and putting a 5% dent in global output.

The US blamed Iran for the 2019 attack, which was carried out with drones and cruise missiles closely resembling known Iranian models. The Pentagon surged forces to defend the kingdom in the aftermath of the 2019 attack, including three combat air units, 3,000 troops as well as ballistic and Patriot missile defenses.

Saudi officials signed a preliminary agreement in 2017 to buy Russia’s S-400 missile defense system, the Kremlin’s equivalent to the United States' Terminal High Altitude Area Defense, or THAAD. The US Congress passed a law that same year requiring that the Treasury sanction any government that makes a major military hardware purchase from Russia.

The deal has so far remained incomplete. The CEO of Russia’s state-owned Rostec company, Sergei Tchemezov, told state-run Russia Today news outlet in February that talks with Riyadh over the S-400 purchase were ongoing.

The Biden administration has touted a new approach toward diplomatic relations with Riyadh after four years of what critics called President Donald Trump’s permissive attitude toward the kingdom’s human rights abuses.

The new administration released a long-awaited declassified US intelligence report implicating Crown Prince Mohammed bin Salman in the murder of journalist Jamal Khashoggi, but refrained from directly penalizing the prince.

Instead, the United States placed sanctions and visa restrictions on lower-rung Saudi officials and delegated future US engagement with bin Salman to Defense Secretary Lloyd Austin. The crown prince also serves as the kingdom’s defense minister.

The Pentagon has emphasized its continued support to help Saudi Arabia defend itself against continued cruise missile and drone attacks, most of which emanate from Yemen, the head of US forces in the Middle East said last month.

“Our president has been clear that we’ll have a different type of relationship with the Saudis going forward,” Austin told ABC's "This Week" on Sunday.

Lavrov visited the UAE on Tuesday. He travels next to Qatar.