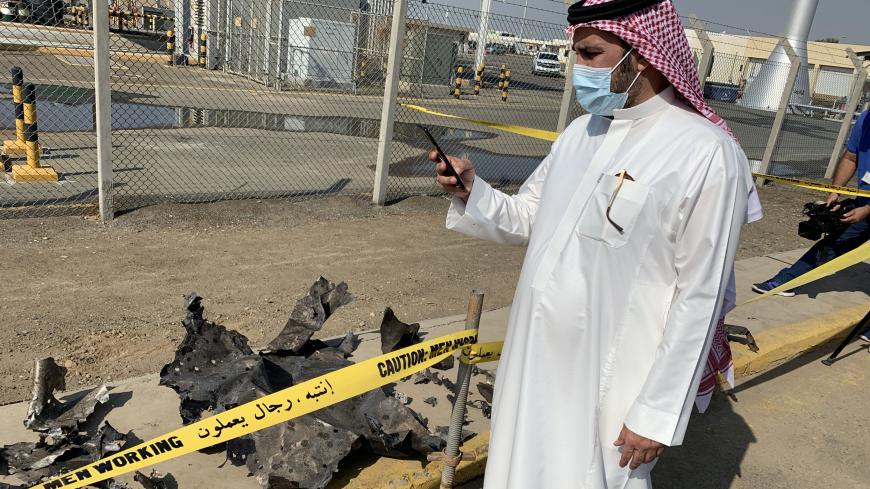 Yemen's Houthi rebels said on March 19, 2021, that they had attacked a Saudi Aramco refinery in Riyadh with drones. Here, a man uses his phone to take pictures of debris following a Houthi missile attack on the Saudi Aramco oil facility in Saudi Arabia's Red Sea city of Jeddah on Nov. 24, 2020. - FAYEZ NURELDINE/AFP via Getty Images

A spokesperson for Saudi Arabia’s Energy Ministry condemned the attack, saying it caused a fire that was quickly brought under control. Saudi state media said no deaths, injuries or impact on the facility’s oil supply resulted from the incident, which occurred shortly after 6 a.m.

The drone attack marks the Houthis’ latest salvo against Riyadh as the Iran-linked rebels push to consolidate their control over Yemen’s north with a renewed offensive on the city of Marib, a final enclave controlled by the Saudi-backed and internationally recognized Yemeni government.

Last week, at least one drone targeted Saudi Arabia’s largest oil storage facility at Ras Tanura amid a spate of Houthi projectile attacks into the kingdom. No damage was reported from that attack, though it caused a temporary spike in the price of Brent crude.

A massive drone and cruise-missile attack on Saudi’s Aqbaiq and Khurais oil production facilities in 2019 temporarily reduced the kingdom’s output. The United Nations has said that attack was carried out with weapons that originated in Iran.

Projectile attacks have continued in recent weeks despite a push by the administration of President Joe Biden to negotiate an end to the war with the Houthis.

The Zaydi Shiite rebels have advanced to within a dozen miles of Marib, ignoring calls for de-escalation and warnings by the United States and UN of mass displacement. At least two people were killed and several wounded inside Marib earlier this week as Houthi artillery struck a downtown market.

Saudi Arabia resumed bombing of suspected Houthi positions in the capital, Sanaa, earlier this month in response to attacks on its territory. The Iran-backed fighters have repeatedly said their strikes on Saudi territory will stop when the kingdom ends its involvement in Yemen’s war.

The Biden administration announced an end to US support for Riyadh’s offensive operations in the conflict in January and rescinded the former Trump administration’s last-minute terrorist designation for the Houthis, in both cases citing humanitarian concerns. The UN has called Yemen's war the world's worst humanitarian conflict, with Riyadh's air campaign and blockade of the country contributing significantly to local crises.

The United States has continued to provide defensive support to Saudi Arabia and has repeatedly condemned Houthi attacks.