The Biden administration's push to end the war has been stalled by a recent escalation. 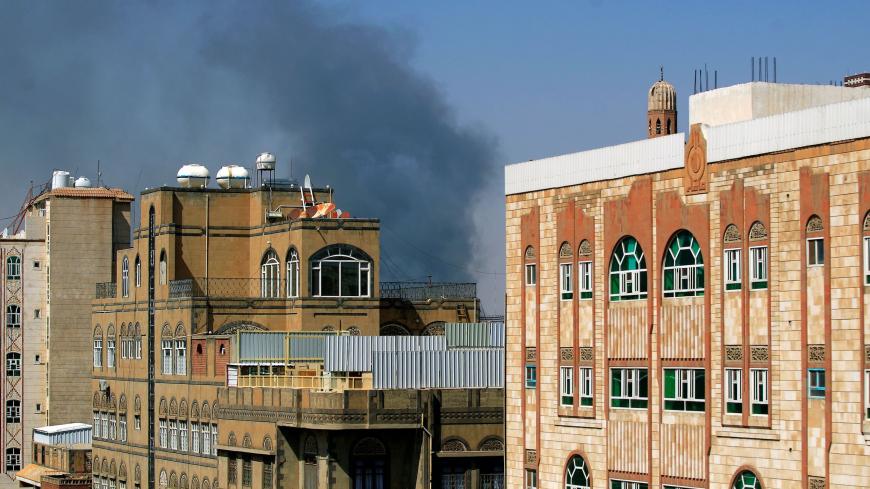 Smoke billows following a reported airstrike by the Saudi-led coalition in the Yemeni capital Sanaa, on March 7, 2021. - MOHAMMED HUWAIS/AFP via Getty Images

The Saudi-led military coalition announced a new campaign of airstrikes in Yemen in response to a series of Houthi missile and drone attacks on the Gulf kingdom this weekend.

Coalition aircraft bombed multiple locations in Sanaa on Sunday for the first time since US President Joe Biden halted offensive support to the coalition in a bid to end Yemen’s civil war.

The coalition said it would also bomb other areas of Yemen. “The targeting of civilians and civilian facilities is a red line,” coalition spokesperson Col. Turki al-Maliki said Sunday.

Riyadh’s response follows a fresh burst of attacks by the Houthis on Saudi Arabia over the weekend. The coalition said it had intercepted at least 12 explosive-laden drones and two ballistic missiles launched toward the kingdom on Sunday.

A suspected Houthi ballistic missile was intercepted in the city of Dhahran near a residential facility used by state-run Saudi Aramco, according to SPA. Explosions were also reported in the western coastal city of Jeddah.

On Monday the US State Department condemned the Houthis’ attacks and said the United States “stands by Saudi Arabia and its people.”

“Our commitment to defend the Kingdom and its security is firm,” the US Embassy in Riyadh said in a statement.

Fighting also reportedly picked up in the area of the embattled petroleum-rich city of Marib, among the last major enclaves left uncaptured by the Houthis.

The United States ended support for Riyadh’s offensive operations in Yemen in January in fulfillment of a campaign promise by Biden. The Saudi-led bombing campaign has drastically worsened the six-year conflict’s human toll, which the United Nations has dubbed the world’s worst humanitarian catastrophe.

Meanwhile, the Pentagon has doubled down on reassuring officials in Riyadh of continued defensive support.

Attacks by Yemen’s Houthis on Saudi Arabia have picked up in recent weeks since the Biden administration revoked an earlier terrorism designation for the Yemeni rebel group in what the commander of US troops in the Middle East, Gen. Kenneth “Frank” McKenzie, called an act of “good will” toward a negotiated end to the conflict.

Attacks by Iran-linked militias in Iraq have also continued over the past several weeks. US officials have said they hold Iran responsible for the actions of its proxy forces in the region.

Timothy Lenderking, the administration’s lead envoy appointed to negotiate an end to Yemen’s civil war, reportedly met with Houthi officials in Oman last month. The State Department has declined to comment on the reported meeting.