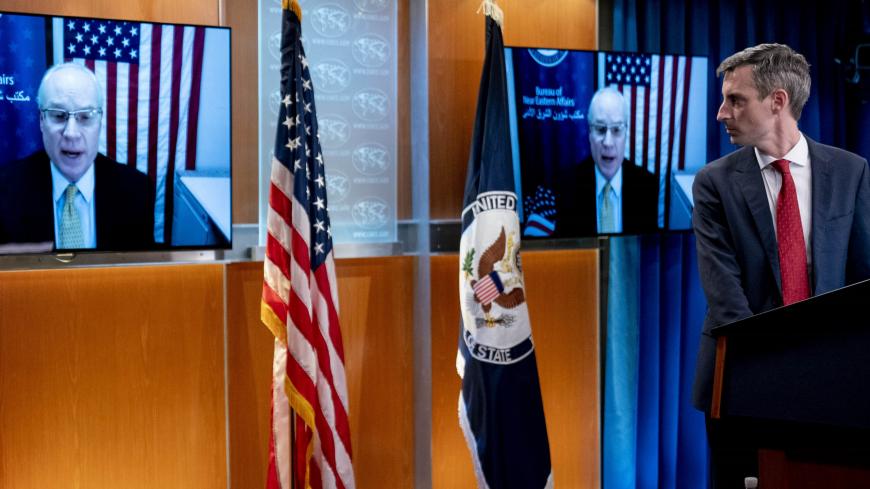 US special envoy for Yemen Timothy Lenderking speaks via teleconference during a news conference at the State Department in Washington, Feb. 16, 2021. At right is State Department spokesman Ned Price. - ANDREW HARNIK/POOL/AFP via Getty Images)

Timothy Lenderking, the lead US envoy on the Yemen crisis, met with Houthi chief negotiator Mohammed Abdul-Salam in Oman’s capital, Muscat, on Feb. 26.

The meeting was the first time US officials under the new administration met with the Zaydi Shiite rebels, who have slowly consolidated control over a majority of Yemen’s population centers since the outbreak of civil war in 2015.

Lenderking toured the Gulf region last month with stops in Riyadh, the United Arab Emirates, Kuwait and Qatar. The Biden administration has pushed for a swift end to Yemen’s conflict, which the United Nations has dubbed the world’s worst humanitarian catastrophe.

US officials have both publicly and privately urged the Houthis to halt their offensive on the central city of Marib, a petroleum-rich enclave that has been largely spared of fighting throughout the conflict.

The Houthis have negotiated with Riyad for more than a year toward ending the conflict, but have continued to launch drone and missile attacks into neighboring Saudi Arabia. With US and other Western support, Riyadh has led a multinational coalition to fight the Houthis and prop up the Yemeni government of Abd Rabbo Mansour Hadi.

The Shiite rebels have ties to Iran’s Islamic Revolutionary Guard Corps (IRGC), which has exported advanced Iranian missile technology in recent years to conflict zones in the Middle East to gain an edge over Tehran’s rivals.

The UAE has been a major player in the Gulf coalition, but began pulling troops from Yemen in 2019. Riyadh has also sought a way out of the conflict, but obstacles to consolidating a unified Yemeni government have until recently hindered progress.

The Biden administration revoked a late Trump-era terror designation for the Houthis last month in a bid to jump-start peace talks, but so far there is no sign that Lenderking’s initial meeting had much success. Details of the talks have not been publicly released.

A State Department spokesperson told Reuters the administration will “not be commenting all [of Lenderking’s] engagements.”

On Tuesday. the US Treasury announced new sanctions on two Houthi military leaders in response to renewed cross-border attacks on Saudi Arabia.

The continued attacks and renewed rocket strikes by suspected IRGC-linked groups in Iraq have led the Biden administration to increasingly emphasize Tehran’s responsibility for its proxy forces.

Last week, the head of all US military forces in the Middle East, Gen. Kenneth “Frank” McKenzie, said responsibility for the next steps toward peace lie with the Houthis, “but they are prompted by their Iranian sponsors.”

“Iran has no interest in this bloody war coming to an end,” McKenzie said.

Meanwhile, Riyadh’s ambassador to Yemen, Mohammed al-Jabar, has communicated with the Houthis about the possibility of a buffer zone on the Yemeni side of the two countries’ border, Reuters reported. The Houthis are reportedly requesting Riyadh lift blockades on the port of Hodeida and Sanaa airport.

If agreed, broader peace talks that include Yemeni government could commence under UN auspices.