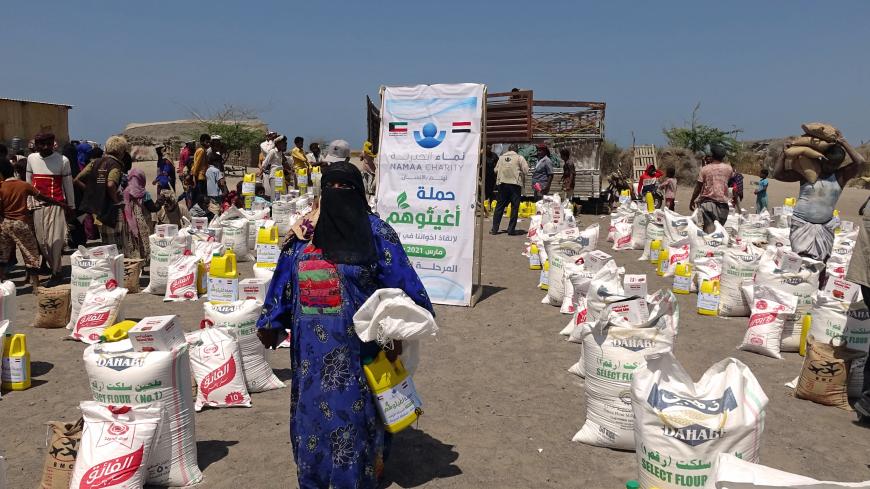 People displaced by conflict receive food aid donated by a Kuwaiti charity organisation in the village of al-Haima in the Khokha district of Yemen's war-ravaged western province of Hodeida, on March 20, 2021. - KHALED ZIAD/AFP via Getty Images

The Saudi-led military coalition will allow four fuel ships to enter the blockaded port at Hodeida, on Yemen’s Red Sea coast, in a limited step towards a proposed ceasefire with the country’s Houthi rebels, Reuters reported Wednesday.

More than a dozen ships remained off Hodeida as of Tuesday, blocked by coalition despite having United Nations' authorization to enter port.

Riyadh on Monday announced a ceasefire proposal for Yemen’s civil war, offering to reopen Sanaa International Airport and for a revenue-sharing deal between the Houthis and the Yemeni government on shipments to Hodeida.

The Iran-backed Houthis responded by saying the offer was “nothing new,” signaling that they would agree to a ceasefire only if their demand for a total end to the coalition’s blockade is met.

The Houthis have forces loyal to the Saudi-backed Yemeni government of President Abed Rabbo Mansour Hadi on the ropes, having captured a majority of the country from the government since taking the capital, Sanaa, in 2014.

Saudi-backed forces are currently fighting to hold on to the gas-rich area of Maarib, a final government enclave now under Houthi assault.

The Houthis have so far balked at Riyadh’s recent gestures. “We expected that Saudi Arabia would announce an end to the blockade of ports and airports,” Houthi chief negotiator Mohammed Abdulsalam told Reuters this week.

The Houthis earlier this month rejected a cease-fire proposal put forth by the Biden administration’s Yemen envoy, Timothy Lenderking, during his latest trip to the region. Meanwhile the rebels have continued their ballistic missile and drone attacks into Saudi territory.

Yemen’s civil war has evolved into a proxy war between Iran and Saudi Arabia, with Iranian ballistic missile and drone technology being deployed by the Houthis against Riyadh. The kingdom wants out of the grinding, stalemated war, but also does not want a well-armed Iranian proxy on its southern border.

The Biden administration has prioritized ending Yemen’s conflict through diplomacy, reversing the Trump administration’s terror designation on the Houthis and ending US support for coalition offensive operations in Yemen. In both cases, the US administration has cited humanitarian concerns.

The United Nations has called Yemen’s civil war the world’s worst humanitarian catastrophe, with some 80% of the country’s population in need of humanitarian aid.

Some experts are questioning whether Saudi Arabia’s latest proposal is serious, suggesting it may be intended to pressure the Houthis rather than make quick and lasting peace. The rebels rejected a similar Saudi offer last year.

“The proposal seems borne of frustration at the stalemated peace process,” said Elana DeLozier, a fellow at the Washington Institute for Near East Policy and adjunct assistant professor at Georgetown University’s school of foreign service.

“Declaring a unilateral peace plan publicly suggests to me that the two parties have not been able to work out a deal privately,” DeLozier told Al-Monitor.

“The Houthis have little incentive to make a deal right now, so the Saudis seem to be trying to message publicly that it is the Houthis, not the Saudis, who won’t make a deal,” she said.

The Zaidi Shia fighters continue to press their offensive against Maarib. On Tuesday they claimed to have shot down a US MQ-9 Reaper drone over the area with missile “that has not been revealed yet.”

A spokesperson for US Central Command said “there is no operational reporting that supports a US MQ-9 was shot down over Yemen” on Tuesday.

Pentagon Press Secretary John Kirby told Al-Monitor on Tuesday he was not aware of any current US military involvement in Yemen beyond counterterrorism operations.