Pentagon: ‘No changes’ so far to US-Saudi military relations after Khashoggi report

US military officials have taken point on maintaining ties with Middle Eastern leaders as the Biden administration talks tough on human rights. 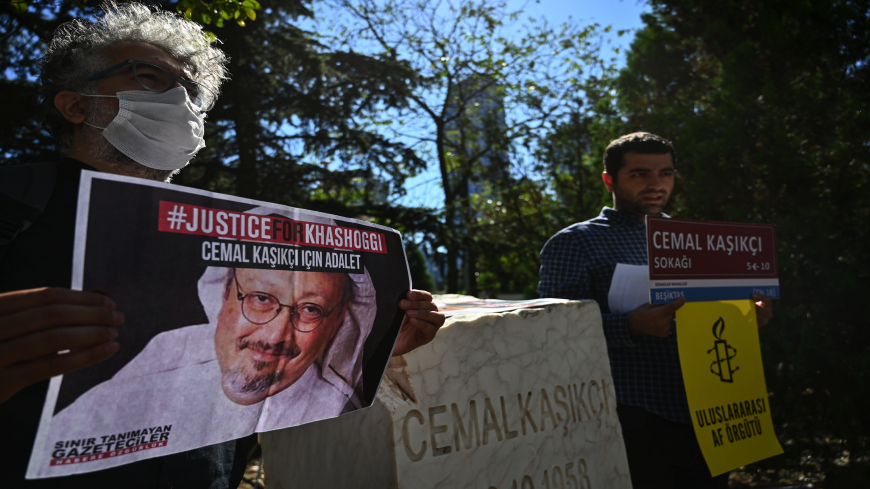 Erol Onderoglu (L), representative of Reporters Without Borders (RSF) in Turkey, holds a poster of murdered Saudi journalist Jamal Khashoggi during an event marking the second-year anniversary of the assassination of Saudi dissident journalist Khashoggi in front of Saudi Arabia's Consulate in Istanbul on Oct. 2, 2020. Khashoggi, a Washington Post columnist, was killed and dismembered at the Saudi consulate in Istanbul on Oct. 2, 2018, in an operation that reportedly involved 15 agents sent from Riyadh. His remains have not been found. - OZAN KOSE/AFP via Getty Images

The Pentagon on Monday sought to distance its enduring ties with Saudi Arabia’s military from the Biden administration’s move to penalize Saudi personnel over the murder of journalist Jamal Khashoggi.

“Right now, I know of no changes to the military-to-military relationship,” Pentagon press secretary John Kirby told reporters on Monday.

“Broadly speaking, certainly the relationship from a bilateral perspective is going to be different under this administration than it was under the last,” Kirby said, citing a declassified intelligence report released last week that implicated Crown Prince Mohammed bin Salman in the murder of Washington Post columnist Jamal Khashoggi.

“Militarily speaking, we have obligations there in Saudi Arabia. And we’re going to continue to meet those obligations,” Kirby said, without offering specifics.

The new US administration last month announced it was canceling support for offensive operations by the Saudi-led military coalition in Yemen’s civil war, citing the conflict’s humanitarian catastrophe.

The Biden administration is treading a fine line, seeking to keep Saudi Arabia as a close partner and strategic bulwark against an increasingly assertive Iran, all while acting to fulfill campaign promises to hold accountable US allies that abuse human rights.

Pentagon officials have been at the forefront of maintaining US partnerships with Middle Eastern states in recent weeks. The first Biden administration official to speak to Salman, Defense Secretary Lloyd Austin, reassured the crown prince last month of continued US defensive support amid renewed missile and drone barrages from Iran-linked groups in the region. That call came after a US freeze last month on major sales of some 10,000 guided bombs to Riyadh pending further review.

The commander of all US forces in the region, Gen. Kenneth “Frank” McKenzie, sat down with Egypt’s President Abdel-Fattah al-Sisi and Armed Forces chief Lt. Gen. Mohamed Farid Hegazi in Cairo last week during his latest visit to the region. Earlier this month, the United States announced a nearly $200 million naval missile sale to Cairo just hours after local authorities arrested relatives of an Egyptian-American activist. State Department spokesperson Ned Price has said the United States is looking into the incident.

Despite slapping visa bans on 76 Saudi nationals amid the release of the intelligence report on Khashoggi’s murder, the Biden administration has reportedly chosen not to penalize Salman, who was likely behind the assassination, according to the declassified assessment.

US officials have avoided publicly confirming whether the crown prince, who also serves as defense minister, is on its so-called Khashoggi ban list, but suggested that further penalties remain on the table.

The United Nation’s special rapporteur who led the body’s investigation into Khashoggi’s murder in 2018 called it “dangerous” and “extremely problematic” for the United States to refrain from penalizing Salman.

Administration officials on Monday offered some reserved praise for the Gulf kingdom’s steps to end the blockade on Qatar and release imprisoned women’s rights activist Loujain al-Hathloul as well as two dual US-Saudi citizens. “All of these constitute steps in the right direction,” Price said Monday, emphasizing, however, that Riyadh’s efforts remain “very incomplete.”

“We feel we can have the most influence over this relationship when we cast this as a recalibration rather than a rupture,” Price told reporters on Monday.

The Trump administration relied on the young crown prince as a channel of Washington’s policy to contain and roll back Iranian influence in the region, often whitewashing his government’s alleged crimes in pursuit of regional goals. Biden vowed during his campaign to overhaul the relationship, saying during a television interview as recently as Friday that “the rules are changing.”

But the administration faces increasing headwinds in the region as Iran vies for leverage ahead of attempts to revive the 2015 nuclear deal. Meanwhile, Russia continues to seek inroads in the Middle East, which Washington seeks to counter.