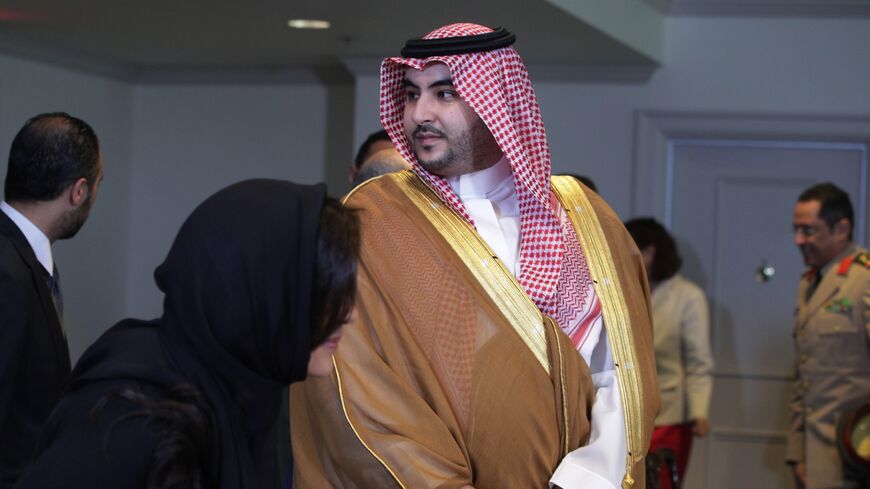 Prince Khalid bin Salman, Saudi Arabia's deputy defense chief, waits for the beginning of a meeting with US officials at the Pentagon on Aug. 29, 2019, in Arlington, Virginia. - Alex Wong/Getty Images

Saudi Arabia’s deputy defense chief made an unannounced trip to Washington on Tuesday in the first official Saudi visit under the Biden administration.

Kahl “thanked the vice minister for working closely and constructively with US special envoy Tim Lenderking to end the war in Yemen and condemned the Houthi cross-border attacks,” Kirby told reporters Tuesday.

US officials discussed ways to work with Prince Khalid’s government to defend against armed drones, which “are increasingly becoming weapons of choice” in the Middle East, Kirby said. Such weapons have increasingly been used by suspected Iran-linked groups to attack both US and Saudi targets in the region.

Despite freezing major arms sales to Riyadh over its government’s conduct in Yemen’s civil war, the Biden administration has continued to assist Saudi Arabia in defending against missile and drone attacks by Houthi rebels across the kingdom’s southern border.

The rebels have sought to pressure Riyadh for better terms to end the conflict while demanding an end to the Saudi-led blockade of Yemen.

Why it matters: Despite President Joe Biden’s campaign promises, his administration appears to be turning the page on the Saudi government’s role in the murder of Washington Post columnist Jamal Khashoggi.

Prince Khalid's trip ­— first reported by The Wall Street Journal last week — is the highest-level visit by a member of the Saudi royal family since Khashoggi was brutally murdered by Saudi agents in Istanbul in 2018.

A US intelligence report released by the Biden administration in February concluded the crown prince — Saudi Arabia’s de facto leader and Prince Khalid’s older brother — authorized the assassination. Warm ties with the former Donald Trump administration did not stop Mohammed bin Salman from canceling a planned trip to Washington last year amid concerns over negative press.

White House spokeswoman Jen Psaki said earlier Tuesday that the subject of Khashoggi’s murder would likely be discussed during the meetings. A White House press release Tuesday evening said the national security adviser "emphasized the importance of progress in advancing human rights in the kingdom."

Prince Khalid’s visit Tuesday was met with no fanfare and was not publicly announced by the United States in advance. A US official speaking not for attribution denied the lack of prior notice was out of the ordinary.

Strategic concerns over China’s increasing military assertiveness appear to be eclipsing the Biden’s administration’s public emphasis on human rights. Despite calling Saudi Arabia a “pariah” state during his campaign, Biden’s administration continues to look to Riyadh’s economic power as a pillar of stability in the Middle East as American officials focus their attention elsewhere.

Saudi Arabia is also working with the United States to end the war in Yemen. The Biden Administration has also welcomed Saudi efforts to reduce tensions in the region with Iran, and in reconciling with Qatar, after a more than three year dispute which divided the GCC,

US officials are hoping to reduce tensions between Saudi Arabia and its main rival, Iran, and their proxies in the region. Prince Khalid has played a central role in his government’s recent talks with Iranian officials in Baghdad, as the United States does the same via indirect negotiations in Vienna over Iran’s nuclear program.

What’s next: US officials have yet to reveal what, if any, new developments came from Prince Khalid’s visit.

Prince Khalid’s visit comes as the Pentagon has moved to withdraw several air defense systems and at least one ballistic missile defense unit from Saudi Arabia in recent months. The commander of US forces in the Middle East, Gen. Kenneth “Frank” McKenzie, touted progress in February on helping Riyadh bolster its own air defenses.

Meanwhile, new revelations that Khashoggi’s killers received paramilitary training in the United States and obtained the poison used to drug the journalist from Egyptian officials in Cairo signal that that file is yet to be closed.