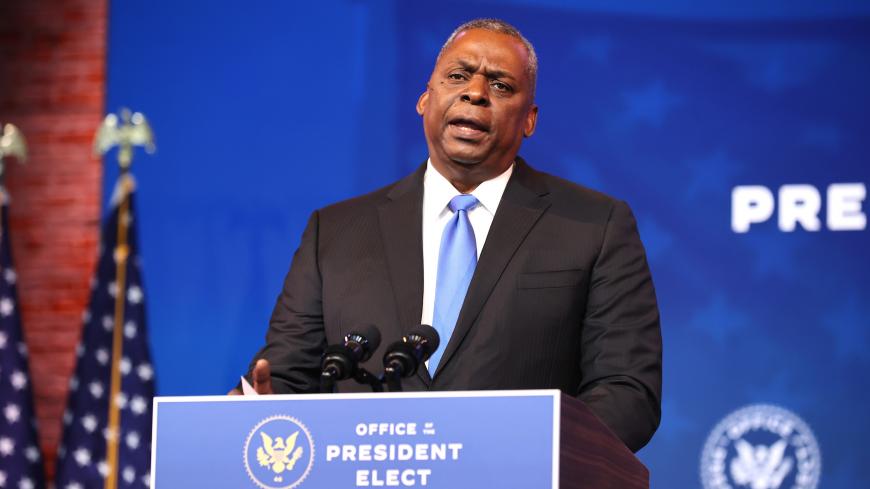 US Army (retired) Gen. Lloyd Austin speaks after being formally nominated to be secretary of the Department of Defense by US President-elect Joe Biden at the Queen Theatre on Dec. 9, 2020 in Wilmington, Delaware. - Chip Somodevilla/Getty Images

The Pentagon chief “underscored Saudi Arabia’s role as a pillar of the regional security architecture in the Middle East and the importance of sharing the responsibility of regional security and stability,” the Defense Department said in a press release.

The call came two days after White House spokesperson Jen Psaki said that President Joe Biden’s future correspondence with the Saudi leadership would be "counterpart to counterpart" via bin Salman’s father, King Salman, in a snub to the crown prince, with whom the former administration preferred to deal directly.

The Biden administration has emphasized the priority of human rights in its foreign policy agenda. Bin Salman, who also serves as the kingdom's defense minister, led a violent purge of dissent in his rise to power.

Austin also reaffirmed the administration’s recent shift in policy toward the Saudi-led military coalition’s involvement in Yemen’s civil war, namely that the United States would no longer support offensive coalition operations inside Yemen. The Pentagon has said it will continue to provide defensive support to Saudi Arabia, including intelligence about Houthi strikes launched from Yemen.

The announcement fulfills a campaign promise from Biden following years of objections from the United Nations, international rights groups and members of the US Congress over the Saudi-led coalition’s repeated bombing of civilians in the conflict.

The United Nations has called Yemen’s war the world’s worst humanitarian catastrophe, with some 80% of the country's population in need of humanitarian aid. UN investigators have warned that foreign governments such as the United States that have armed parties to the conflict could potentially be complicit in war crimes.

One month into Biden’s presidency, officials in Washington are carefully treading a new path in the Middle East, aiming to reassure strategic partners in Israel and the Gulf while offering to loosen restrictions on their mutual rival, Iran, if its government returns to compliance with the 2015 nuclear accord.

So far it remains unclear how the White House will achieve both goals. Iran’s proxies across the region appear to be responding with renewed aggression.

Austin’s call follows a handful of recent of aerial strikes on Saudi Arabia’s territory by suspected Iran-linked groups in the region. Last month, at least two projectiles were launched toward Riyadh as the commander of US forces in the Middle East, Gen. Kenneth McKenzie, visited the kingdom to coordinate with Saudi officials.

In one of those attacks, explosive-laden drones launched from Iraq struck the royal complex in Riyadh, the Wall Street Journal reported today.

In Iraq's Kurdistan Region, a barrage of 107mm rockets rained down in and around the Erbil airport earlier this week, killing a military contractor and wounding eight others, including a member of the US military. US and international forces are stationed at a base located within the airport.

The Biden administration swiftly condemned the attack and offered support to the Kurdistan Regional Government and to Baghdad, saying Washington “reserves the right” to respond to the strike.

The US administration has so far avoided publicly pointing the finger at Iran for any of the recent incidents, though the Erbil barrage was claimed by a suspected front group for influential Shiite militias in Iraq backed by the Islamic Revolutionary Guard Corps. Iran’s government denied involvement in a statement on Tuesday.

On Thursday, US State Department spokesperson Ned Price revealed the United States would agree to participate in multilateral talks with Iran over its nuclear program if invited by the European Union.

Meanwhile, debate has swirled inside the administration over how to return to the original deal with Iran or whether to do so at all, according to Politico.

Israeli Prime Minister Benjamin Netanyahu has pushed for unified opposition to a US return from his government. On Thursday, Israel’s ambassador to the United States spoke with the new chair of the House Foreign Affairs Committee, Rep. Gregory Meeks, who has supported renewed engagement with Tehran.

The Biden administration informed Israeli officials of US willingness to enter into multilateral talks with Iran via EU invitation prior to Thursday's announcement, Reuters reported.