It's been one year since Joe Biden was sworn in as US president. We take a look at his statements on the Middle East and see where things stand today. 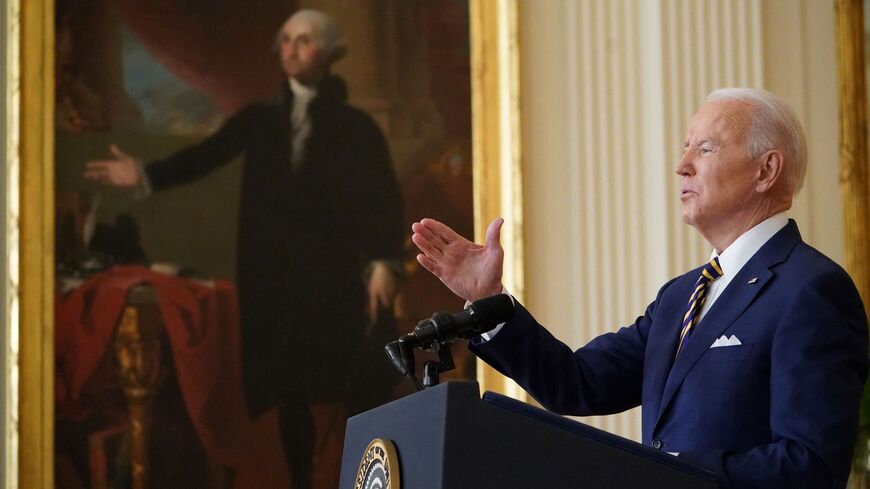 US President Joe Biden speaks during a news conference in the East Room of the White House, on Jan. 19, 2022, in Washington, DC. - MANDEL NGAN/AFP via Getty Images

A year ago, President Joe Biden took office promising to restore global alliances, put human rights at the center of his foreign policy and dismantle his predecessor's "America First" legacy. Biden quickly did away with President Donald Trump’s ban on travel from Muslim-majority countries and moved to rejoin the World Health Organization and Paris climate accords.

But has Biden delivered on all his campaign pledges for the Middle East? Here’s a look at how some of his commitments to the region held up in his first year as president.

“If Iran returns to strict compliance with the nuclear deal, the United States would rejoin the agreement as a starting point for follow-on negotiations.”

Biden hoped to quickly re-enter the 2015 nuclear accord as a starting point for negotiations before forging a “longer and stronger” agreement that would address non-nuclear issues, such as Iran’s ballistic missile program and support for terrorist proxies. But expectations for a quick return faded. As Iran ramped up its nuclear activity and elected a hardline new president, US officials abandoned talk of a follow-on agreement.

The Biden administration has sought to temper expectations, warning there are other options should diplomacy in Vienna fail to produce a deal. Behind the scenes, US officials have reportedly floated the possibility of striking an interim agreement with Tehran that would offer limited sanctions relief.

“We were going to ... make them pay the price and make them, in fact, the pariah that they are.”

The early months of Biden's tenure seemed to forecast a frostier relationship for the Arab Gulf state. The Democratic president froze arms sales to the kingdom and refrained from directly engaging with Saudi Arabia’s de facto ruler, Crown Prince Mohammed bin Salman. In what some read as a goodwill gesture, the kingdom released several prominent activists during Biden’s first month in office.

But hopes for a major upset in US-Saudi ties were dashed when Biden declined to personally punish Prince Mohammed, even after a damning intelligence report found him responsible for journalist Jamal Khashoggi’s murder. To critics, Biden gave the crown prince a “free pass.” The administration defended its approach as one that’s meant to “recalibrate,” not “rupture” relations with Saudi Arabia, a major oil producer and bulwark against Iran, and whose partnership is needed to end the war in Yemen.

No more ‘blank checks’ for Egypt

“Arresting, torturing, and exiling activists like Sarah Hegazy and Mohamed Soltan or threatening their families is unacceptable. No more blank checks for Trump’s favorite dictator."

Egypt posed an early test of the Biden administration’s pledge to make human rights a focus of its foreign policy. As a candidate, Biden promised “no more blank checks” would be given to Egyptian President Abdel Fattah al-Sisi, whose country is the second-largest recipient of US military assistance per year. In light of his campaign commitment, Biden was expected to leverage some of Egypt’s annual $1.3 billion aid package to secure much-needed human rights reforms in the North African country.

Ultimately, the administration withheld from Egypt $130 million of the $300 million in military assistance that Congress had conditioned on Cairo taking steps to improve its rights record. It was a compromise that failed to satisfy activists and some Democrats who wanted Biden to take a tougher approach. The Biden administration says human rights are central to the US-Egypt relationship, but also stressed Egypt’s cooperation on regional security, including its role brokering a May 2021 ceasefire between Israel and Hamas.

Ending US involvement in Yemen’s war

“I would end US support for the disastrous Saudi-led war in Yemen ... President Trump has issued Saudi Arabia a dangerous blank check.”

In keeping with a campaign promise, Biden also announced he was ending American support for the Saudi-led coalition’s “offensive operations” in Yemen, including relevant arms sales. But questions remain over what constitutes “offensive” versus “defensive” support to Saudi Arabia, whose bombing campaign against the Iran-backed group has killed scores of Yemeni civilians. In December, a bipartisan group of lawmakers failed to block a $650 million sale of air-to-air missiles to the kingdom, which the Biden administration said would help Saudi Arabia fend off the Houthis' cross-border attacks.

“I will restore credible engagement with both sides to the conflict. ... It is also essential to resume assistance to the Palestinian Authority.”

In line with campaign pledges, Biden resumed ties with Ramallah that were severed under Trump, reaffirmed support for a two-state solution and restored US funding to the cash-strapped UN agency for Palestinian refugees.

But opposition from Israel has prevented the Biden administration from reopening the US Consulate in Jerusalem, which served as a de facto American embassy for the Palestinians before it was shuttered by the prior administration. Domestic politics and legislation signed by Trump in 2019 has reportedly kept Biden from following through on a promise to reopen the Palestine Liberation Organization’s mission in Washington.